Steve Stricker paid his dues to become a Ryder Cup captain, and it had nothing to do with winning a major. 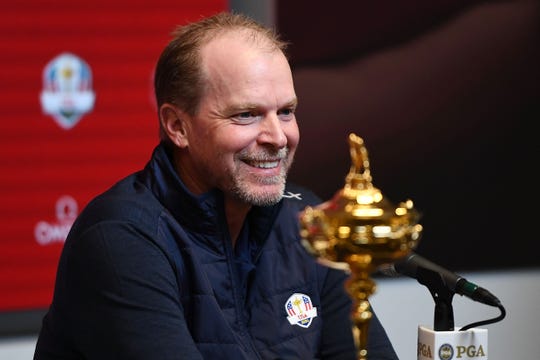 Steve Stricker speaks with the media as he is named United States Ryder Cup Captain for 2020 during a press conference Wednesday. (Photo: Stacy Revere, Getty Images)

Steve Stricker paid his dues to become a Ryder Cup captain, and it had nothing to do with winning a major.

He didn’t make his first team until he was 41 in the 2008 matches at Valhalla, a rare U.S. victory, and played in two more. He spent the next six years in the back room as an assistant captain to Tom Watson, Davis Love III and Jim Furyk, and he was captain of the formidable U.S. team at the 2017 Presidents Cup.

Stricker was appointed Ryder Cup captain on Wednesday, his seventh straight time taking part in the matches, this time in charge of an American team trying to win back the gold trophy in his home state of Wisconsin.

It was hardly a surprise with the 2020 matches going to Whistling Straits, an hour north of Milwaukee where Stricker was introduced Wednesday. He still had his doubts when his name first was mentioned five years ago, aware each of the 28 previous American captains had won a major.

“I was thinking they’re not going to have me. I haven’t won a major,” he said. “But it kept going further along, me putting in the time last year, the Presidents Cup a couple of years ago, and the PGA of America and Ryder Cup committees saying they wanted to move off from that.”

All that matters now is bringing the Ryder Cup back to America.

Tiger Woods, among three players on the Ryder Cup committee, said Stricker was a unanimous choice.

“Everyone knows he’s such a nice guy, but beneath all of that exterior is this fieriness and this competitiveness, and he’s also one of the more detail-oriented guys that we know,” Woods said. “I think that he’ll be prepared, he’ll be understanding and he’s very good at communicating with the players and getting their opinions but also putting his foot down when he has to.”

Europe, which already has appointed Padraig Harrington as its captain for the 2020 matches, has won seven of the last nine times, including a 17.5-10.5 victory outside Paris last year. That ended badly for the Americans, mainly from Patrick Reed saying in an interview with the New York Times that he blamed Jordan Spieth for them not playing together and captain Jim Furyk for benching him twice.

Stricker is all about looking ahead, and says he already has spoken to Reed.

“We had a good conversation,” Stricker said. “I kind of asked him what to expect and he said, ‘I’ve got your guys’ back, I’m there for the team.’ He’s every bit committed. He knew what happened and was not comfortable with it, not happy with how that transformed. We’re here about moving forward, pointing toward the next team, and I hope to have him as part of this team. We have a long ways to go.”

The Mexico Championship, which starts Thursday, is the first tournament where Ryder Cup points can be earned for the U.S. team. Reduced points are available this year at the World Golf Championships, the Players Championship and the majors, with full points at every event starting in 2020 (extra for the majors).

Stricker wept after each of his 12 victories on the PGA Tour, so imagine being introduced in his home state as a Ryder Cup captain.

He didn’t get one sentence out before he tried to choke back tears.

“I’m an emotional guy. I’m truly humbled,” Stricker said. “I’m very passionate about this competition. We want to win this more than ever. I want to help any way I can.”

Europe never bought into the notion that Ryder Cup captains had to be major champions, though there also was a long stretch when Europe didn’t have a long list of candidates. It took a U.S. loss in Scotland in 2014 for the players to finally take more control of the whole process, forming a task force that gave players input along with the PGA of America.

Now it’s about continuity, and that much was clear with Stricker’s first appointment as an assistant – Furyk, whom he said would have been his choice even without the plan for immediate past captains to be assistants the next time.

Another change PGA of America president Suzy Whaley announced Wednesday was the timetable for qualifying and being a captain’s pick. Qualifying will end after the 2020 BMW Championship, the second of three FedEx Cup playoff events, and then all four picks will be announced two days after the season-ending Tour Championship.