Phil Mickelson said he never contributed to William “Rick” Singer’s foundation tied to his California-based company, Edge College & Career Network, but used the service to find the right fit for his children. 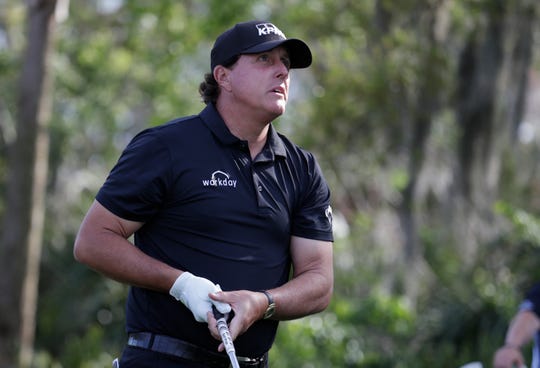 Phil Mickelson says he might be “more shocked than anyone” to learn that a college consulting company he has used the last three years has been accused of orchestrating a massive bribery scheme. (Photo: Lynne Sladky, Associated Press)

Ponte Vedra Beach, Fla. — Phil Mickelson says he might be “more shocked than anyone” to learn that a college consulting company he has used the last three years has been accused of orchestrating a massive bribery scheme.

He said he never contributed to William “Rick” Singer’s foundation tied to his California-based company, Edge College & Career Network, but used the service to find the right fit for his children.

His oldest daughter is now a sophomore at Brown.

“We’re not part of this,” Mickelson said. “Most every family that has used his company are not a part of it. That’s why I think we’re all so surprised.”

Federal prosecutors said parents paid Singer millions of dollars to bribe their children’s way into college. Some of the payouts went to coaches and administrators to falsely make their children look like star athletes, and Singer also hired ringers to take college entrance exams for students and paid off insiders at testing centers to correct students’ answers, authorities said.

More than 50 people have been charged.

A note from Mickelson and his wife, Amy, appears as a testimonial to Singer on a website for “The Key,” another name for his company. They thank him for his support in finding their daughter the right college.

“The college process is so layered and confusing. I don’t know what we would’ve done without your insight and belief in our daughter,” said the note, which Mickelson said was a text his wife sent to Singer.

“We, along with thousands of other families, hired he and his company to help us guide through the college application process, and we’re probably more shocked than anyone,” Mickelson said after his first round of The Players Championship. “We’ve been dealing with it the last few days, but that’s about it.”

Mickelson was delayed after his 74 because of random drug testing. Moments before meeting with reporters, he tweeted that he was not part of “this fraud.”

His daughter attended Pacific Ridge School in San Diego, where she was a co-captain of the tennis team and the school president. He has two other children, a sophomore and junior in high school, and says he has been using Singer’s company to find them the right colleges.

Mickelson said Singer never approached him about any fraudulent charges involved in the case. Singer pleaded guilty on Tuesday.

“Our kids … schools are like fighting to get them,” Mickelson said. “I say that as a proud dad. But their grades, their outside activities, their worldly views on things, have colleges recruiting them. We weren’t even aware, really.”

Asked about Mickelson’s daughter, Clark declined to disclose student names but said university officials had done a review of one student’s application material and academic credentials and that it “raised no concerns at all.”

Clark added that Brown has had no contact with the FBI, U.S. Department of Justice or any other federal agency.

Mickelson said Singer’s company helped to find the right college for their personalities and to make sure they knew what they needed academically and with test scores to be accepted into the college of their choice.