Saturday's golf: Tiger Woods meets his match, and it's not Rory McIlroy

Woods won his morning match against McIlroy, then lost in the quarterfinals to Lucas Bjerregaard.

Saturday's golf: Tiger Woods meets his match, and it's not Rory McIlroy 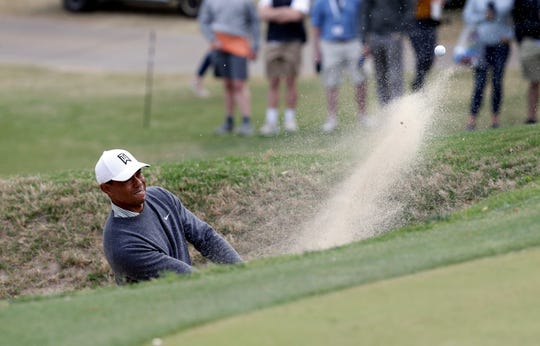 Austin, Texas — The conditions were severe. The high stakes put a premium on every shot down the stretch. Tiger Woods was in his element.

Only this time, he was a spectator.

Lucas Bjerregaard delivered the clutch shots so often seen from Woods in their quarterfinal match. He holed a 30-foot eagle putt to tie the match on the par-5 16th. He holed a 12-foot birdie putt that snapped hard to the right at the end on No. 17, knowing Woods was in tight for a certain birdie.

And on the final hole, Woods blinked first.

His lob wedge from a fluffy lie in the rough came out soft, short and in a bunker. Given a chance to send the match to overtime, Woods missed a 4-foot putt.

“It’s a shame it had to end the way it did,” Bjerregaard said. “Our match didn’t deserve that. But I’m happy to be on the winning side.”

Bjerregaard considers Woods his golfing hero, and he used to take his book to the range in Denmark with hopes of copying his swing. He never could get it just right, though the 27-year-old Dane showed plenty of Woods’ mettle.

Equally surprising was how Woods won earlier Saturday against McIlroy, a big match between the two biggest stars left at Austin Country Club. McIlroy was on the verge of squaring the match on the 16th hole when he had a short iron for his second shot into the par-5 16th. He made 7 and Woods closed him out on the next hole.

McIlroy was so angry he walked briskly away into a cart, and wouldn’t make eye contact on his way to the car.

“This is going to sting for a few days,” Woods said in his last event before the Masters.

Bjerregaard, who won his first European Tour title last fall at St. Andrews in the Dunhill Links, next faces Matt Kuchar on Sunday morning in the semifinals.

Kuchar had to cope with a contentious moment in his 2-up victory over Sergio Garcia, two players in the news this year for all the wrong reasons.

Garcia had an 8-foot par putt on No. 7 to win the hole to square the match. He left it just short, and then casually stabbed at it from the other side as it rimmed around the cup. Such putts typically are conceded. Kuchar said that was his intention. But under the rules, a putt can’t be conceded after a player hits it. 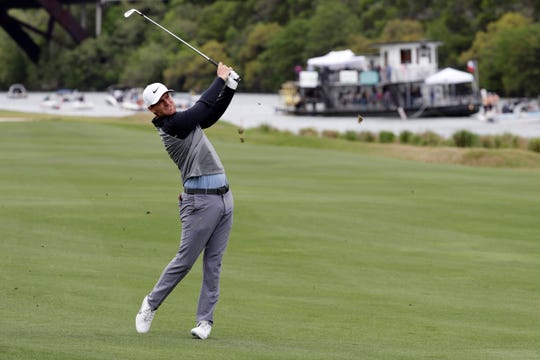 Kuchar says he didn’t want to win the hole that way. That’s when Garcia suggested if he felt that way, he could concede the next hole.

Garcia needed to birdie the 18th hole to send the match into extra holes, missed the green and wound up conceding.

“At the end of the day, I’m the one that made the mistake,” Garcia said.

Overlooked it all this drama was British Open champion Francesco Molinari, who has steamrolled his way into the semifinals. Molinari, at No. 7 the only player from the top 20 remaining, has played only 73 holes in five matches. He is the only player to have not lost a match, and the only one left who has not played the 18th hole.

“I can play 27 holes per match, that’s not really the point,” Molinari said after his 6-and-5 victory over Kevin Na. “It’s nice obviously to close it out early, but I’m ready to go as long as it takes.”

Kevin Kisner became only the third player to lose a match in group play and advance to the semifinals. He lost to Ian Poulter on Wednesday and has been rock-solid ever since, winning three straight holes late to flip his match in a 2-and-1 victory over Louis Oosthuizen.

This is the second straight year Kisner has reached the semifinals. He lost in the championship match last year to Bubba Watson.

Woods, who had not been at Match Play since 2013, advanced to the weekend for the first time since 2008, his third title in this World Golf Championship. All the attention was on his match against McIlroy, and Woods had a 1-up lead when one bad shot changed everything.

McIlroy pounded a 395-yard drive with the wind at his back. Woods drove into a half-buried lie in the bunker, could only advance it 60 yards and had 204 yards for his third shot before McIlroy hit a short iron for his second.

Woods never had to putt.

McIlroy hit a shot so bad that it was short and right. Worse yet, it hopped out of its pitch mark on the edge of a bunker, but not back enough to fall into the sand. Facing a difficult shot to the pin over another bunker, he went long and the ball rolled through the gallery against wooden posts. His only option was to go back to the original spot and play his fifth shot.

Woods, who looked certain to lose the hole and go all square, suddenly was 2 up with two to play. He closed out McIlroy with a 12-foot par putt.

“It was a difficult day for both of us,” Woods said.

Bjerregaard looked at the bracket the night before and knew there was a chance he would get Woods. First, he had to beat Henrik Stenson, and the Dane took care of Scandinavia’s best player in 16 holes.

He said he often dreamed about a chance to play Woods in a match when he was growing up in Demark.

“I didn’t think it was ever going to come true,” he said.

Playing him or beating him?

“Both,” he said with a smile. “And definitely the latter.”

Second-round leader Sungjae Im, likely needing a victory Sunday to get into the top 50 in the world and earn a Masters spot, had a 69 to drop into a tie for third with Aaron Baddeley (68) at 13 under. The winner doesn’t get an automatic Masters spot because the event is being played opposite the World Golf Championships event in Texas.

In Carlsbad, Calif., Inbee Park curled in an 18-foot birdie putt on the par-4 18th for her second straight 5-under 67 and the third-round lead in the Kia Classic, the final event before the major ANA Inspiration.

Winless in a full calendar year, the seven-time major champion from South Korea had a one-stroke advantage over Nasa Hataoka after a low-scoring day in perfect conditions at Aviara Golf Club. Seeking her 20th LPGA Tour victory, Park had a 14-under 202 total.

Thidapa Suwannapura was two strokes back after a 70.

Mi Jung Hur shot a course-record 62 to join top-ranked Sung Hyun Park at 11 under. Hur had seven straight birdies on the back nine.

In Biloxi, Miss., Kevin Sutherland made a 15-foot birdie putt on the par-4 18th for a 3-under 69 and a three-stroke lead in the Rapiscan Systems Classic.

Tied for the first-round lead with Marco Dawson after a 65, Sutherland had a 10-under 134 total at Fallen Oak. Dawson was second after a 72.

The 54-year-old Sutherland rebounded from a bogey on the par-4 second with a birdie on the par-3 third and also birdied the par-3 eighth. He opened the back nine with birdies on the par-4 10th and 11th and bogeyed the par-5 15th.

Fred Couples and Billy Andrade were 5 under. Preparing for the Masters, the 59-year-old Couples shot 70. Andrade had a 68.