Thursday’s golf: Brian Stuard one back at Valero Texas Open

Si Woo Kim has gotten off to a fast start and is leading after the first round of the Valero Texas Open.

Thursday’s golf: Brian Stuard one back at Valero Texas Open 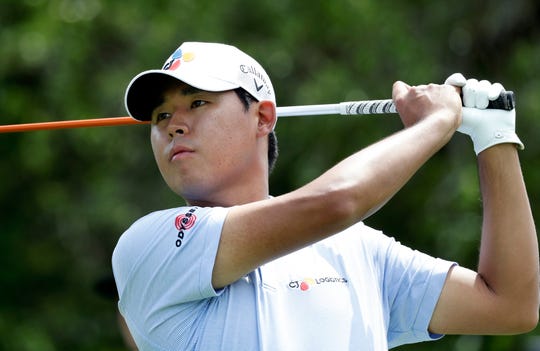 San Antonio — Si Woo Kim has gotten off to a fast start and is leading after the first round of the Valero Texas Open.

And Rickie Fowler appears to be back on track for another strong finish in the Masters.

Kim, the 2017 Players Championship winner, leads by a shot over Abraham Ancer, J.T. Poston, Brian Stuard and Jhonattan Vegas. He's two ahead of a group that includes Fowler and Jordan Spieth at the PGA Tour's last stop before Augusta.

Stuard is from Jackson, Mich., and Oakland University.

"This week, I'd love to play well and get in contention and have a chance to win," Fowler said on Thursday. "But the real reason is getting ready for next week, and I'm happy with 68."

More than 10 players were tied at 3 under including Matt Kuchar, J.B. Holmes, Rory Sabbatini and Graeme McDowell, who won last week at a Tour event in the Dominican Republic.

Kim moved to the lead with accurate iron play. On his final five birdies, only one came with a putt from more than 12 feet. Just yesterday he switched his technique of reading greens after experiencing what he thought was shaky nerves over putts.

"The yips," Kim said. "It's been better, reading (the greens) and the stroke. This time I don't have the yips. I'm reading good and putting well."

Vegas, the Venezuelan who played collegiately less than two hours away at Texas, had four straight birdies on the back nine despite feeling the effects from a fever the previous night. He had two more good chances to match Kim late in the round.

But a 13-footer at the 15th that would have tied him with Kim rolled to the lip without falling. He also missed birdie from 11 feet at No. 17. After a 341-yard drive at the par-5 18th, he pulled his approach into the stream fronting the green but still managed par.

"Besides having a fever last night, and dealing with allergies right now, I mean, withdrawing crossed my mind last night," Vegas said.

Fowler, who's using his first trip to the Texas Open to get in his final work before Augusta, made a 25-foot birdie on his third hole and had a share of the lead until his only bogey of the day at his 17th at TPC San Antonio.

"A solid day of golf and some good work," Fowler said. "That's a big thing with me playing the week before Augusta, trying to check off as many boxes as we can so that we're comfortable with what we're working on Monday, Tuesday, Wednesday and tee it up Thursday next week."

Spieth finished second in the Texas Open in 2015. He recovered from a three-putt bogey at the 15th with a pitch shot to inside three feet to set up birdie at No. 17.

"I struggled a little bit with the swing to start," Spieth said. "But I kept the ball in between the beacons, and I was able to take advantage of the par-5s."

It's Kim's fourth appearance in this event. In 10 previous rounds, he had never broken 70 here and his best finish was 22nd two years ago.

He's not been at his best lately. Following a pair of top-five finishes at Pebble Beach and Los Angeles, his past three starts have included a missed cut and a tie for 56th. He was soundly beaten in three matches at last week's Match Play. None of those went past the 14th hole.

Fowler had a share of the early lead with two holes to play. But on his 17th hole of the day, his tee shot on the par-5 went right of the fairway. He punched out from the brush and faced a third shot still 250 yards from the green. That approach went in the bunker and he bogeyed.

Fowler's 17-foot birdie on the final hole failed to drop.

Fowler has not played on Tour since he was tied for 47th at the Players. He won the Waste Management Phoenix Open in February and was tied for second when Keith Mitchell sank a final-hole birdie to win the Honda Classic on the Florida swing.

Spieth hasn't cracked the top 20 this year. He hasn't won since the British Open in 2017.

Lexi Thompson birdied the final two holes Thursday for a 3-under 69 and a share of ANA Inspiration lead halfway through the opening round of the first major event of the year in Rancho Mirage, Calif.

The 2014 champion was tied with Jin Young Ko and Hyo Joo Kim after the morning wave at Mission Hills.

NCAA champion Jennifer Kupcho held on for a 1-under 71 on Thursday for a one-shot lead in the Augusta National Women’s Amateur, leaving her one round away from a chance to become the first woman to win a tournament at the home of the Masters.

MSU’s Allyson Geer-Park missed the cut with rounds of 76 and 78.