In his 15 years at the Masters, in his two decades as a pro, Zach Johnson had never experienced a shot like this. 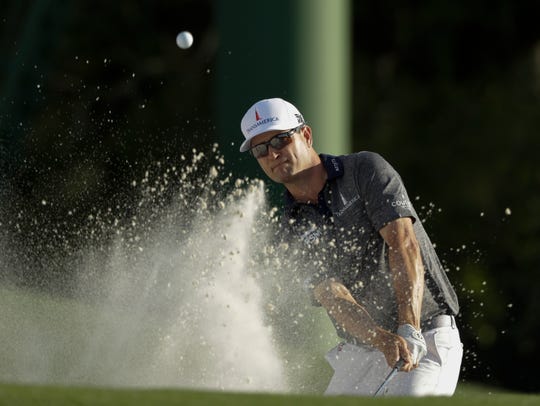 Augusta, Ga. — In his 15 years at the Masters, in his two decades as a pro, Zach Johnson had never experienced a shot like this.

He had never hit one that short, either, but at least it didn’t count.

Johnson was going through his practice routine on the par-5 13th on Friday when the tip of his driver hit the golf ball. It went straight right into the tee marker, and then ricocheted to the left about 5 yards away.

Johnson was so stunned he blurted out, “Oh, (s–-)” before turning to his group to figure out his next move. Matt Kuchar, Ian Poulter and the caddies replied in unison that the shot wasn’t intentional and there was no penalty.

That he wasn’t trying to hit the shot is what kept him from the penalty, a decision in place even before the new Rules of Golf this year. It’s covered under Rule 6.2b(5) on starting a hole: “If a teed ball falls off the tee or is knocked off the tee by the player before the player has made a stroke at it, it may be re-teed anywhere in the teeing area without penalty.”

Johnson said he knew the rule. His reaction was “only because I have never done that.”

The rest of the group apparently hadn’t either because they couldn’t stifle their laughter.

“Y’all can laugh,” Johnson said as he prepared to hit again. “That is embarrassing.”

Johnson drilled his tee shot and wound up making birdie on his way to a 73.

A tee shot unlike any other... pic.twitter.com/aOwHAJrvFh

Two years ago, Justin Rose and Sergio Garcia faced off in a playoff for the green jacket.

On Friday, both were heading home.

Rose and Garcia missed the cut by a single shot, each carding a 4-over 148 for the first two rounds at Augusta National.

Rose’s performance was especially disappointing, since he entered the Masters as the world’s top-ranked player.

Martin Kaymer was the last No. 1 player to miss the Masters cut in 2011.

Also sent home: Paul Casey, who stumbled to a 10-over 154 just three weeks after winning the Valspar Championship near Tampa, Florida.

Four amateurs advanced to the weekend, the most to make the Masters cut in two decades.

At the midway point, Viktor Hovland of Norway was the top amateur at 1-under 143, while Alvaro Ortiz of Mexico (144), Devon Bling of the United States (147) and Japan’s Takumi Kanaya (147) also earned two more rounds at the year’s first major.

American Kevin O’Connell (148) was among those who missed the cut by a single stroke. Also failing to advance was South Africa’s Jovan Rebula (152).

Ian Woosnam played one final round as a competitor, walking off the Augusta National course that yielded his only major championship nearly three decades earlier. Woosnam, 61, missed the cut after rounds of 76-80.

He said a bad back and struggles coping with the hilly terrain confirmed a decision he wrestled with a few years ago.

“This is the last one. So sad to go,” Woosnam said. “I determined it a couple of years ago and got a telling-off from my wife. She said, ‘Get out there and do it again.’ … But it doesn’t seem to get any better any time I come back.”

A moment later, Woosnam added, “Maybe if they will give me a cart or something like that, I’ll come back. … But I don’t think I’ll get that.”

His victory in 1991 marked the first time a world No. 1-ranked player won the Masters. What he remembered most vividly about that win was, “knowing that this is my opportunity and I took that opportunity. That was it.”

The Welshman also said he’d be back to play in the par-3 contest, “be part of it, get my green jacket on, float around and enjoy it, you know.”

The first order of business for Jordan Spieth at the Masters was to make sure he had a tee time on the weekend. He was tied for 63rd after opening with a 75, and it’s probably a good thing he didn’t bother inquiring caddie Michael Greller about the cut line early in the round.

There was a dicey moment early when Spieth had to make an 8-foot putt on the first hole just to make bogey. That was his last mistake. Spieth ran off four birdies in a six-hole stretch in the middle of his round for a 68 and at least was still in the game.

“I feel really good about today’s round and what you’re saying as far as some momentum going forward,” Spieth said, who was six shots behind when he finished. “If I can somehow cut it to three by Sunday, then I feel like I have a legitimate chance.”

Spieth was nine shots behind going into the last round at the Masters last year and shot 64 with a bogey on the last hole to finish two behind.

He was leading the Masters at 7-under par when he was mystified by a shot that went over the green on the ninth hole, leading to bogey.

“I think what happened there was that I didn’t catch the proper spin rate,” DeChambeau said. “I caught a lower spin rate with a lower trajectory and it just flew right over the green and just kept ascending. Clearly the wind must have shifted just a little bit off of the right and not into us, and I drew it with the wind and it actually helped it … and then I had a lower spin rate and it just said, ‘See ya later.’”

The double bogey on the 10th was easier to explain.

“I had a mud ball in the middle of the fairway, and I tried to cut it up the slope and it just hooked on me,” he said.

As for the chip over the green?

“Hit a little 40-yard shot relative to what I do on the range all day long, accounting for a 5, 6, 7-degree upslope … and it comes out, it shoots over the green like 60 yards. I don’t get it. So that’s the game. That’s golf. And that’s why I love it, but I also hate it at the same time.”

He was four shots behind, still very much in the game.

“Not terrible,” DeChambeau said. “But surely, I could be 10 under right now.”