Masters notebook: Rahm back in contention at Augusta after 3-under 69

The 24-year-old Spaniard finished in fourth place last year at Augusta National, but had to fight from behind after shooting an opening round 75.

Masters notebook: Rahm back in contention at Augusta after 3-under 69 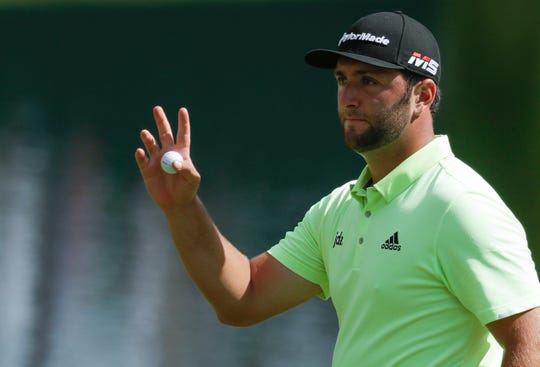 Jon Rahm, of Spain, saves par on the 16th hole during the first round for the Masters golf tournament Thursday. (Photo: Chris Carlson, AP)

Augusta, Ga. — Jon Rahm is back in contention at the Masters after shooting a 3-under 69 in the opening round. This time, he’ll have a head start on most of the field entering the second round instead of fighting just to make the cut.

The 24-year-old Spaniard finished in fourth place last year at Augusta National, but had to fight from behind after shooting an opening round 75.

“Today, it’s just kind of the start,” Rahm said. “Trying to get the tournament going. Hopefully you get yourself in position. It’s a huge bonus to be in the lead – it’s an amazing feeling.

“I’m just happy I shot under par in the first round of the tournament.”

Rahm was in the same group on Thursday as Tiger Woods, who also had a good opening round after shooting a 70. Playing with Woods always brings out the crowds, but Rahm didn’t seem fazed by the big gallery, playing a bogey-free back nine that included birdies on No. 11 and No. 13.

The two-time PGA Tour winner is known for his temper, but kept his emotions in check on Thursday. He rarely compounded his mistakes. A good example was the 505-yard, par-4 No. 11: He hit his drive into the pine straw, but recovered with an approach that found the green and then finished with a 34-foot putt for birdie. A big grin followed.

“I think that the most important thing is I never lost patience,” Rahm said. “I was 1-over par on the par 5s going to the back nine where it’s easy to get a little frustrated and I didn’t. I kept my cool and I was able to make a great birdie on nine and get where I’m going.”

He also got some good fortune on No. 15, when a wayward drive that was flying left bounced off a tree and left a manageable second shot that led to par.

It was his fourth straight round at Augusta National shooting in the 60s.

Last year, Rahm shot 65 on Saturday and a 69 on Sunday, vaulting up the leaderboard to finish four shots behind winner Patrick Reed.

Jordan Spieth has become an afterthought on the PGA Tour.

Even at the course where he usually plays so well.

Adding another entry to his yearlong slump, Spieth struggled to a 3-over 75 in the opening round of the Masters and was a whopping nine shots off the lead. Not exactly the sort of start he was looking for at a major championship that he won in 2015, where he’s twice been a runner-up and finished third another time, a big reason he calls it “my favorite tournament in the whole world.”

Making the cut is his main priority at the moment.

Spieth’s misery was epitomized at the par-3 sixth hole, where he pushed his tee shot right of the green and followed with a terrible pitch, the ball rolling back off the front. He ran the chip 8 feet past the cup and missed the putt for a double bogey.

It was more of the same at the ninth.

Spieth’s approach to the tiered green caught the front slope and rolled back into the fairway. The Texan tried to pitch it up with his third shot, only to come up short again, watching helplessly as the ball rolled back to where he was standing in what anyone watching at home probably thought was a replay. He finally kept one on the green with his next swing but settled for his third bogey on the front side.

Up to now, Spieth’s wedge game had been the only thing keeping him somewhat in the game.

On a sunny day at Augusta National, that seemed to abandon him as well.

Spieth pulled things together somewhat after the turn, stringing together a bunch of pars to go with a birdie at the par-3 16th, when he stuck his tee shot 8 feet from the flag and rolled in the putt. But all that did was keep him from eclipsing the worst score of his Masters career.

Justin Harding of South Africa spent most of his Masters debut  atop the leaderboard, and that’s not an unusual position for him over the past year.

No one else at Augusta National can claim five victories and three runner-up finishes since the last Masters. Then again, few Masters competitors were in the Lombard Insurance Open or the Royal Swazi Open.

The biggest win of his career so far was the Masters — in Qatar, not Georgia. Harding moved into the top 50 of the world ranking to secure his first Masters invitation with a runner-up finish in the Kenya Open.

“I handled the emotions of the day quite well,” Harding said after opening with a 3-under 69.

And for one day, it was a reminder that winning anywhere in the world means a player is doing something right.

He stood out as an example of why the PGA Tour believes some other tours might be getting too many world ranking points based on weaker fields. This has nothing to do with Harding. All he has done is play tournaments, and the 33-year-old who competed collegiately at Lamar outside Houston is playing the best golf of his life.

In the last year, he has won twice on the Sunshine Tour (one was a 54-hole event), twice on the Asian Tour and once on the European Tour (Qatar Masters).

He made his American debut two weeks ago in the Dell Match Play, and while he didn’t advance out of his group, he managed to beat Matt Fitzpatrick and Luke List, while losing to Rory McIlroy.

Most of these courses are new to him, just like Augusta National.

So when Harding was reminded of his rookie status at the Masters, and how it has been 40 years since a newcomer won a green jacket, he wasn’t bothered.

“It’s pretty much how I’ve been playing for the last 15 months,” Harding said. “I’m seeing the golf course for the first time almost every week. So I’m not taking any real demons, any bad shots or any bad memories into them, I suppose.”