‘Nothing like Tiger’: Woods would be ‘wonderful’ for Detroit event but it’s a guessing game

“To me, Tiger Woods is the most recognizable and impactful athlete of my generation,” PGA Tour commissioner Jay Monahan said.

‘Nothing like Tiger’: Woods would be ‘wonderful’ for Detroit event but it’s a guessing game 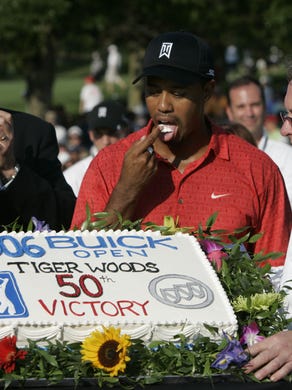 Tiger Woods samples his cake in front of the crowd at the 2006 Buick Open following his 50th victory on the PGA Tour. Ankur Dholakia, Detroit News
Fullscreen

Golfer John Daly takes a beer can from Kid Rock to use as a golf tee on the seventh tee during the 2008 Buick Open pro-am. David Guralnick, Detroit News
Fullscreen

Tiger Woods walks through the gauntlet of autograph-seekers at the Buick Open pro-am in 2006. Dale G. Young, Detroit News
Fullscreen 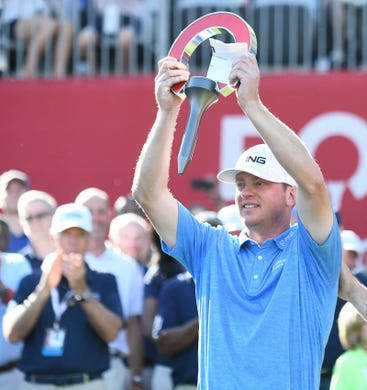 The gallery awaits the arrival of Tiger Woods on the 14th tee at the 2006 Buick Open. Dale G. Young, Detroit News
Fullscreen

Tag Ridings walks up to the 17th green at the 2008 Buick Open. The 17th hole was once one of the rowdiest holes on the PGA Tour. John T. Greilick, Detroit News
Fullscreen

Woody Austin and the gallery react after Austin narrowly misses chipping in on the 16th green during the 2008 Buick Open. John T. Greilick, Detroit News
Fullscreen

Fans surrounding the 17th green get the wave going during a break in the action during the 2008 Buick Open. Daniel Mears, Detroit News
Fullscreen

Kenny Perry catches his balll, tossed by his caddie on the 18th hole on the 18th green at the 2008 Buick Open. Perry won the event twice, including in 2008. Dale G. Young, Detroit News
Fullscreen

Fred Funk tries a little dance to get his sand shot into the hole on the 18th green at the 2008 Buick Open. Dale G. Young, Detroit News
Fullscreen

Kid Rock hits out of a sand trap on the 16th hole during the 2008 Buick Open pro-am. David Guralnick, Detroit News
Fullscreen

Warwick Hills groundskeepers work to get the water off the course during a 1980s playing of the Buick Open. Detroit News archives
Fullscreen

United States team captain Hal Sutton has a laugh during the 2004 Ryder Cup at Oakland Hills Country Club. It was one of the few light moments for Team USA, which was routed by Team Europe. Dale G. Young, Detroit News
Fullscreen

A tale of two golfers: Sergio Garcia celebrates in front of Phil Mickelson after taking his match at the 2004 Ryder Cup. Daniel Mears, Detroit News
Fullscreen

Phil Mickelson and Tiger Woods share an embrace during the pre-festivities at the 2004 Ryder Cup. Steve Perez, Detroit News
Fullscreen

Team Europe's Darren Clarke takes a puff of his cigar during the 2004 Ryder Cup at Oakland Hills. Timothy A. Clary, Getty Images
Fullscreen

The sun rises as Team Europe practices before the start of the 2004 Ryder Cup. Dale G. Young, Detroit News
Fullscreen

Mr. Tiger Al Kaline, a longtime Oakland Hills member, has a laugh during a round prior to the 2004 Ryder Cup. Robin Buckson, Detroit News
Fullscreen

Team USA poses for its official portrait prior to the start of the 2004 Ryder Cup. Todd McInturf, Detroit News
Fullscreen

Members of Team Europe pose for their official portrait prior to the 2004 Ryder Cup. Todd McInturf, Detroit News
Fullscreen

Payne Stewart takes the tee after Greg Norman during the third round of the 1996 U.S. Open at Oakland Hills. Doug Pensinger, Getty Images
Fullscreen 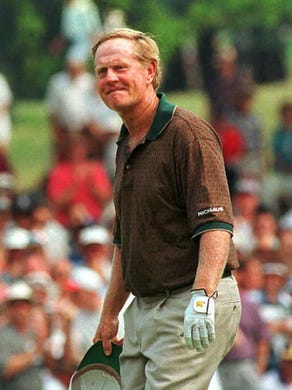 Jack Nicklaus looks to the gallery after the conclusion of his 40th U.S. Open, in 2006, at Oakland Hills Country Club. Bob Pearson, Getty Images
Fullscreen 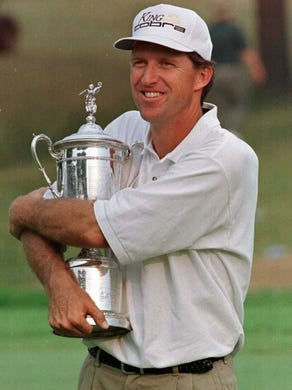 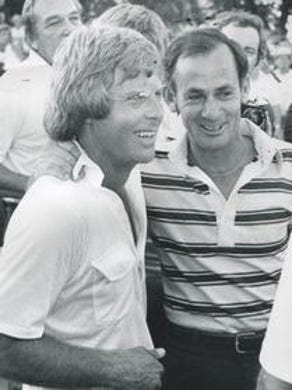 3 col color sports pix Lee Trevino takes a big sigh before hitting his drive on the 18th, Thursday. Trevino finished five over par after the first round. (GENERAL): Lee Trevino and Dana Quigley, Jim Thorpe and Craig Stadler partner and Doug Tewell play during the opening round of the 2004 Senior Players Championship at the TPC of Michigan in Dearborn, Thursday afternoon, July 8, 2004. (Todd McInturf/The Detroit News)2004. Todd McInturf, The Detroit News
Fullscreen

Craig Stadler plays out of the rough at the 2004 Senior Players at the TPC of Michigan in Dearborn. Todd McInturf, Detroit News
Fullscreen 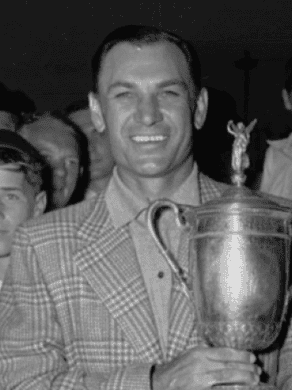 Golf legend Ben Hogan famously said he "brought this Monster to its knees" after winning the 1951 U.S. Open at Oakland Hills. USGA
Fullscreen

Australia's Minjee Lee chips from behind the 18th green during the final round of the LPGA Volvik Championship on in 2017 at Travis Pointe Country Club Ann Arbor. Gregory Shamus, Getty Images
Fullscreen

Padraig Harrington gets a police escort to make his way through the crowds after winning the 2008 PGA Championship. Todd McInturf, Detroit News
Fullscreen

Kirk Triplett throws a ball to fans in the grandstands on the 17th green at Warwick Hills during the inaugural Ally Challenge in 2018. Dale G. Young, Detroit News
Fullscreen

Paul Broadhurst is awarded the trophy for winning the inaugural Ally Challenge in September 2018. It was a Champions Tour event. Dale G. Young, Detroit News
Fullscreen

Todd Montoya, caddie for Brian Stuard, wears a mask during the third round of the Rocket Mortgage Classic in 2020. Stacy Revere, Getty Images
Fullscreen 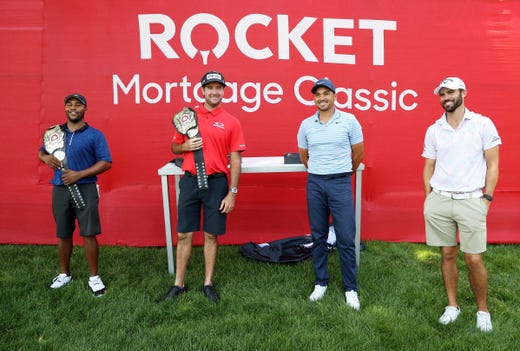 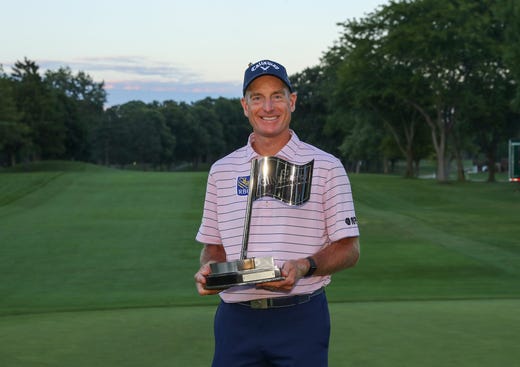 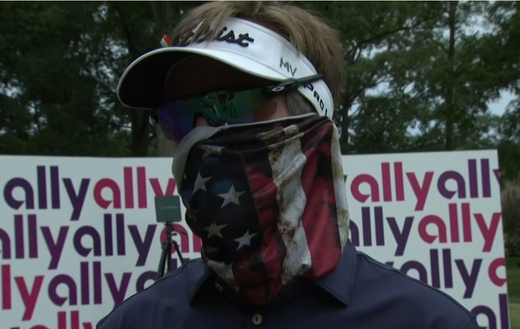 Brett Quigley does an on-course interview with the Golf Channel during Saturday's second round of the 2020 Ally Challenge, which was played without fans because of COVID-19.   Golf Channel
Fullscreen

Detroit – It’s clear, just more than seven weeks out, that interest in the inaugural Rocket Mortgage Classic is growing.

The tournament, to be played June 27-30 at Detroit Golf Club, marks the return of the PGA Tour to the state of Michigan after being absent since the Buick Open ended its run in Grand Blanc back in 2009. The fact it’s taking place within the city of Detroit is the icing on the cake as professional golf is surging once again in the state. 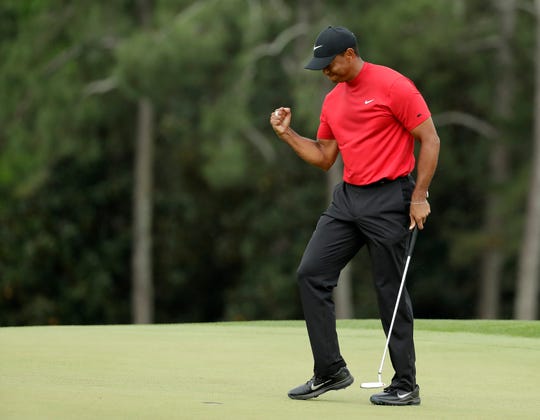 Golf fans are scooping up tickets and corporate suites are all but gone.

However, one question remains: Who will be playing when the 156-man field is finalized?

OK, the better question is: Will HE be playing? Yes, we’re talking about Tiger Woods.

“To me, Tiger Woods is the most recognizable and impactful athlete of my generation,” PGA Tour commissioner Jay Monahan said this week as he visited both Warwick Hills, site of the PGA Tour Champions’ Ally Challenge, and the Detroit Golf Club.

“There is nothing like Tiger,” Monahan added. “To me, he’s the most recognizable, dominant athlete in my lifetime and this generation. To have him back at this point in time … every week that he’s playing it pulls in more casual fans to our sport. If that were to happen and we see more of that, that would be a wonderful thing.”

The Rocket Mortgage Classic isn’t unique, other than the fact it’s a first-year event. Outside of the major tournaments, there seem to be few guarantees on Woods’ schedule these days. After playing on a nearly weekly basis late last season, Woods admitted he was worn out and vowed to take a more conservative approach this season in an effort to remain fresh and not put undo stress on his surgically repaired back.

More: 'Excitement is palpable' for pro golf's return to Michigan

That idea of playing a lighter schedule might have been emphasized after the 43-year-old capped a remarkable comeback last month by winning the Masters. Woods hasn’t played since and barring a last-second decision to play next week’s Byron Nelson Classic, he won’t play again until the PGA Championship at Bethpage May 16-19 in New York.

From there, Woods would seem likely to play two weeks later at the Memorial from May 30-June 2 in the tournament hosted by Jack Nicklaus in Dublin, Ohio. Two weeks after that is the U.S. Open at Pebble Beach from June 13-16. What Woods does from that point until the British Open July 18-21 in Northern Ireland is where the guessing game begins.

That leaves the Rocket Mortgage Classic and the 3M Open in Blaine, Minn., as the two events Woods would seem to be choosing from to play. 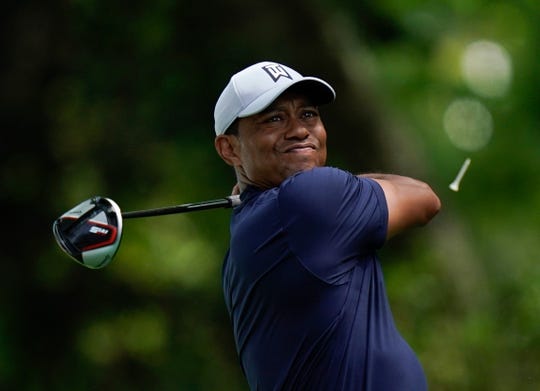 The 3M Open, like the Rocket Mortgage Classic, is a first-year event and is played the following week from July 4-7. It has already secured commitments from Brooks Koepka, Bryson DeChambeau, Jason Day, Patrick Reed and Phil Mickelson. The Detroit event, meanwhile, has landed No. 1-ranked Dustin Johnson along with Rickie Fowler and Bubba Watson and it has a larger purse at $7.3 million compared to $6.4 million at the 3M Open.

There are several of reasons Woods might opt to play in Detroit, chief among them the fact Woods has a successful history in the state, having played the Buick Open nine times, winning at Warwick Hills three times. He also has a close relationship with Quicken Loans, which sponsored his tournament in Washington D.C. before the date was given to the Rocket Mortgage Classic.

The case for Woods playing near the Twin Cities is it fits more into how he has typically scheduled, meaning playing two weeks before a major. However, if that held true, Woods would be playing at the Wells Fargo Championship this week, and with the move of the PGA Championship from August to May, everyone is adjusting to the new scheduling.

“At the end of the day, it’s the player’s decision,” Monahan said. “A lot of factors go into their decision making. All we do is help them be as informed as they possibly can.”

Don’t expect a decision soon from Woods. He rarely commits early and players have until the Friday before the tournament to enter. However, more commitments should be rolling in over the course of the next few weeks and odds are the big names won’t end with Johnson and Fowler.

But even with names like Jordan Spieth, Justin Thomas and Rory McIlroy all still out there, the big one is Woods.

“You always want to have Tiger play in your event,” Monahan said. “But you’ve got 46 events on the schedule and he’s going to play in 16-18 events. If you look over course of our schedule I think the depth of our player fields today – and look at the players that have committed thus far and the fact the community has responded. That’s all happened without knowing whether or not he’s going to play.

“I think you’ll have a great field. Having Dustin and Rickie committed this early is pretty exceptional and that list is only going to continue to grow.”