Brooke Henderson opened a three-stroke lead Friday in a 30-hole day at the Meijer LPGA Classic. 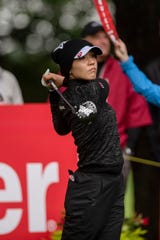 Lydia Ko, of New Zealand, watches her tee shot on the first hole during the first round of the Meijer LPGA Classic golf tournament on Thursday. (Photo: Alyssa Keown, Associated Press)

Trying to break a tie for the Canadian victory record for both women and men, Henderson completed an 8-under 64 in the rain-delayed first round and shot another 64 in the second round at Blythefield Country Club.

Henderson finished play late Thursday with a hole-in-one on the 15th hole, her sixth hole of the round that started seven hours late.

“I was able to carry it on early this morning,” said Henderson, the 2017 winner at Blythefield. “Then I had lunch and came right back and played another 18. I just felt really confident today with my ball-striking, which is awesome, and I rolled in a few putts, too.”

Henderson birdied five of the final six holes in the second round to break the tournament 36-hole record she set in 2017 by two strokes.

“With these soft conditions you can take it pretty much right at it, which I’ve been doing,” she said. “To shoot scores like that you have to have everything kind of working for you and you have to get some breaks along the way, too, which I did. I think playing well last night, finishing off with a hole-in-one before going to sleep was really exciting for me, and I was just able to back it up this morning, which is cool.”

Brittany Altomare was second at 13 under after rounds of 66 and 65. She played 31 holes Friday.

“It was long, but we made the best of it,” Altomare said. “I’ve been struggling this year with my putting, which is normally my strong suit, and today and yesterday, I guess last night into today, it just kind of all clicked.”

“I’ve been hitting the ball really well,” Kupcho said. “The last couple tournaments I’ve been struggling with that, so just to hit the ball well has been nice. I hit a lot of greens both rounds. I would just say pretty much everything is going good.”

Annie Park was 9 under with a hole left when play was suspended because of darkness. Twenty-eight players were unable to finish.

Henderson’s ace Thursday was one of five in the first two rounds, one off the LPGA Tour tournament record set in the 1999 Mercury Titleholders Championship. Mariajo Uribe, Giulia Molinaro and Haru Nomura also aced the 15th in the first round, and Lindy Duncan had one on No. 7 in the second round.

“It was a really fun group,” Henderson said. “Two amazing players and defending champions, so they know how to play this golf course really well. It was a lot of fun making birdies together and just kind of see how they’re doing it.”

The KPMG Women’s PGA Championship, the third major championship of the year, is next week at Hazeltine in Minnesota.