Brian Stuard, the Jackson native and Oakland University alum who's long been grinding away on the PGA Tour, fired a scorching 6-under 66.

Jackson's Brian Stuard, an Oakland alum, talked to reporters following his first round of the Rocket Mortgage Classic on Thursday. The Detroit News

Detroit — Brian Stuard — 36 years old, a darn good golfer for most of those years, and a professional golfer for 15 of those years — has never played in front of more family and friends than he did Thursday.

And, boy, did he give them something to cheer about. 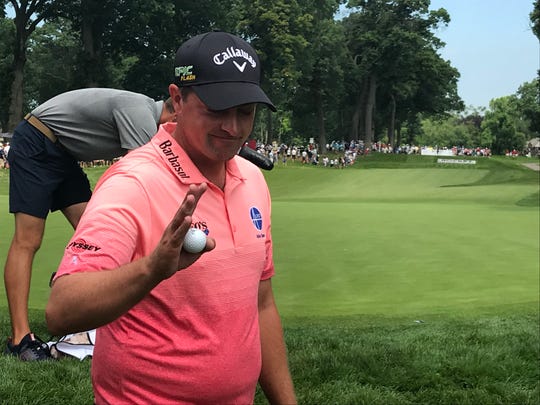 Stuard, the Jackson native and Oakland University alum who's long been grinding away on the PGA Tour, fired a scorching 6-under 66 in the first round of the Rocket Mortgage Classic at Detroit Golf Club.

That put him among the leaders from the morning wave of tee times.

"It's pretty special, for sure," Stuard said a few moments after signing his scorecard. "I didn't get to play in the Buick Open when they had it, so to get to play in a PGA Tour event in Michigan is pretty awesome.

"As soon as they announced it, they said it was going to be at Detroit Golf Club, such a class, special course, so I think everybody's looking forward to it."

Stuard is one of four Michigan players in the 156-player field this week, along with PGA Tour rookie Joey Garber, who was making a nice little charge up the leaderboard Thursday, as well.

Nate Lashley was the early leader, with a 9-under 63. 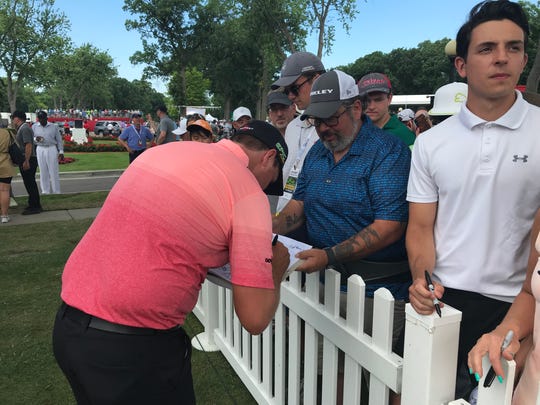 Stuard started with a birdie, but then bogeyed two of his next four holes — 1 over after 5 when most of the field was firing at some very accessible flag sticks. Things turned around with birdies at Nos. 16 and 17, with 10-foot and 19-foot putts, respectively.

"I think probably, beginning of the round I was probably a little nervous, a little unsettled maybe" he said, acknowledging the slight pressure of playing in front of so many loved ones. "But once I got on a roll, I felt like I kind of fed off everybody.

It got a whole lot more fun on his second nine of the day, the front nine. Stuard then fired a 31, capped off with a 5 iron to less than 2 feet on the par-3 ninth hole — in front of a large crowd of suddenly Stuard fans.

That fraternity will only grow, big-time, if this continues.

"Hopefully that's the case," he said. "That would be cool."

Stuard didn't care to guess how many tickets he handed out to friends and family this week, but acknoweldged it was a whole heck of a lot.

He grew up in Jackson and went to Napoleon High School, before attending Oakland University for four years.

"The best four years of my life," he said with a wide grin. "You know college." 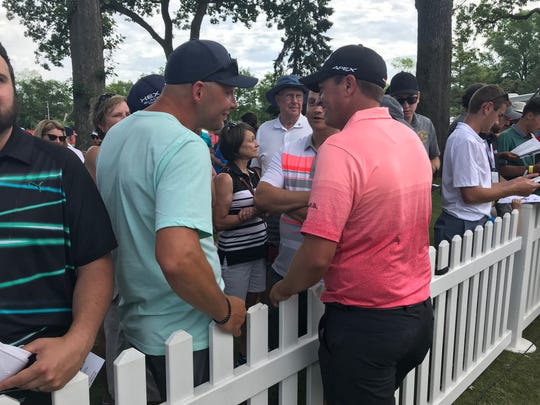 Brian Stuard chats up friends after his round. (Photo: Tony Paul, Detroit News)

Stuard lives in Texas year-round these days, but still has a lot of family in Michigan, and even more friends.

He heard a whole lot of, "Go Grizzlies" Thursday on the course — a course he was somewhat familiar with, having played the Horton Smith as a youngster — and then chatted up some pals following his round, before signing a whole lot more autographs than he's accustomed to. Stuard fist-bumped one fan at the end of a viewing fence, before heading off to find some lunch.

Stuard would have some time to connect with more family and friends, with a whole afternoon to kill Thursday, before his afternoon tee time Friday, enough time to ponder the possibilities of this weekend. He's won once on the PGA Tour, the 2016 Zurich Classic in New Orleans, but, yeah, this would be different. And better.

"As soon as it was announced, how many texts and emails I got, 'Hey, are you coming to play in Michigan?'" said Stuard, whose season has included two top-10s and six top-25s, plus his first-ever made cut at the U.S. Open earlier this month. "It's pretty cool."

Detroit Golf Club 'very comfortable' for Michigan's Joey Garber, and it shows with 67