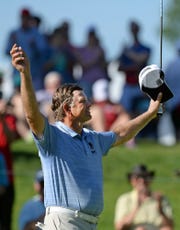 “It’s been 10 years since I last won a tournament,” Goosen said. “The nerves were there, and to have those nerves a little bit again in the last few weeks, you know, you’ve just got to put yourself in a position all the time to get used to it again and that’s what I’ve done and it finally paid off this week.”

Three strokes ahead after opening rounds of 69 and 62, Goosen dropped a stroke behind Scott Parel on Saturday with a 75.

“Played great the first two rounds and then didn’t play all that bad yesterday, just let the course get the better of me,” Goosen said. “And today it was playing tough again. It was tough to get close, tough to make birdies, but managed to finish with four birdies in the last six holes or seven holes, so it was nice to pull it off.”

“It’s an unbelievable course,” Goosen said. “It’s a golf course that hitting the fairways is the No. 1 priority, and even if you’re on the fairway, sometimes you struggle to get close. It’s a great golf course. This week it played tough with the way the wind blew.”

Haas, trying to become the oldest winner in tour history, closed with a 67.

“I’ve been struggling,” Petrovic said. “Been kind of doing everything mediocre this year. Kind of got back to work this week, kind of went back to basics.”

“I think I probably will do better next time I’m here,” Parel said. “I was probably not as prepared for the course. I probably needed to take a club out, put another one in here or there. Really seemed to bite me today more than anything.”

Steve Stricker, the first-round leader after a 64, shot a 72 to finish sixth at 1 under. He was coming off a victory two weeks ago in the U.S. Senior Open at Norte Dame, and also won the major Regions Tradition in May.

“Just made too many mistakes again,” Stricker said. “Didn’t make too many putts when I did have some opportunities, and you’ve got to have all parts of your game working here. It’s a great course. It was set up tough, but a great week.”

In Silvis, Illinois, Dylan Frittelli won the John Deere Classic for his first PGA Tour title, closing with a 7-under 64 for a two-stroke victory over Russell Henley.

The South African earned a spot next week in the British Open, finishing at 21-under 263 after the bogey-free final round at TPC Deere Run. He opened with rounds of 66, 68 and 65 to begin the day two strokes back.

Henley shot a tournament-best 61. Andrew Landry was 18 under after a 69.

Rookie Collin Morikawa (66), the runner-up last week in Minnesota, and Chris Stroud (67) followed at 17 under. Morikawa hit all 18 greens in regulation.

Petoskey's Joey Garber made the cut but didn't finish.

In North Berwick, Scotland, Austria’s Bernd Wiesberger beat France’s Benjamin Hebert with a par on the third playoff hole in the Scottish Open for his sixth European Tour title.

Hebert shot 9-under 62 to set the clubhouse target at 22 under at The Renaissance Club, but overnight leader Wiesberger (69) recovered from a slow start to reclaim top spot with ha birdie on the 16th, only to bogey the 17th and then par the last to force a playoff.

Also the Made in Denmark winner in May, Wiesberger moved to the top of the Race to Dubai standings.

Hebert earned one of the three qualifying places in the British Open next week at Royal Portrush. England’s Andrew Johnston (62) and Italy’s Nino Bertasio (68) took the other two spots after tying for fourth.

In Stateline, Nev., Tony Romo completed a wire-to-wire victory in the American Century Championship for his second straight victory in the celebrity tournament at Edgewood Tahoe Golf Course.

The former Dallas Cowboys and current CBS analyst closed with a 2-over 74 and scored 20 points to finish at 71 in the modified Stableford scoring system. Former pitcher and Michigan State standout Mark Mulder, the winner from 2015-17, was 10 points back after a 71 and a 24-point day.

Romo became the fourth player in tournament history to successfully defend the title. With Romo an amateur, the $125,000 first prize was donated to official tournament charity Stowers Institute for Medical Research.