Get to know me: LPGA star Brooke Henderson loves Rice Krispies, Reba and puppies (but she doesn't have one)

Henderson, ranked No. 9 in the world, will compete in the inaugural Dow Great Lakes Bay Invitational this week in Midland.

Get to know me: LPGA star Brooke Henderson loves Rice Krispies, Reba and puppies (but she doesn't have one) 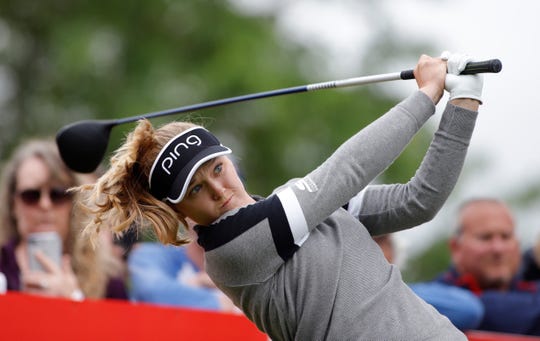 This spring and summer, The Detroit News again will be introducing you to some of the lesser-known sports standouts in the area, including from the United Shore Professional Baseball League, Detroit City FC and Detroit Sun FC, among others. Consider this sort of like speed dating, without the dating.

A special appearance this week for “15 Things You Don’t Know About Me” — Brooke Henderson, the No. 9-ranked women's golfer in the world and a member of the LPGA Tour who is playing in this week's Dow Great Lakes Bay Invitational at Midland Country Club (though she decided to share 10 things about her). The tournament begins Wednesday and runs through Saturday, and features a format of two-player teams.

Henderson has won nine times on the LPGA Tour, including twice this year, among them the Meijer LPGA Classic in Grand Rapids in June.

1. My favorite cereal growing up was Lucky Charms. It's Rice Krispies now.

2. I listen to all country music, especially Reba McEntire. I love how powerful she is and all her songs have great meaning.

3. The weirdest animal I've seen on a golf course, probably, is just like a weird spider or a weird snake, in Thailand or Florida.

4. I watch movies all the time. The last movie I watched in the theater, I just watched the new "Aladdin" twice. I love Disney movies.

6. The last book I read, it was a long time ago. Probably "Heaven is for Real."

7. I can hit every club in the bag out of a sand trap, with the exception of my woods.

8. If there were more days in the week, I'd probably practice more.

9. The last thing I Googled, probably dog breeds. My favorite types of dogs are dogs that don't shed. I don't have one now, but I wish I did.

10. Am I good at directions? It depends on the day.

Outlook: This is the inaugural running of this tournament, and it features two-player teams, much like the PGA Tour's Zurich Classic in New Orleans. Here's a look at pairings and tee times.

Michigan baseball's Riley Bertram has emerged out of nowhere; maybe it's the Sriracha!

Winter or summer, UM draft pick Jordan Brewer must sleep with the fan on

Michigan baseball's Jeff Criswell can crush a meal at Mr. Spots or Dimo's

USPBL's Matthew Dallas afraid of the dark, but not Jack In The Box tacos

Wait, how many baseballs can USPBL's Luis Contreras hold in one hand?