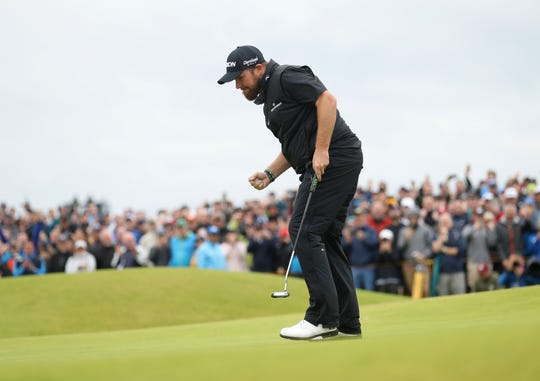 Shane Lowry reacts after making a birdie on the 15th green during the final round of the British Open this past weekend. (Photo: Peter Morrison, Associated Press)

A celebration that began on the 18th fairway of Royal Portrush extended well into the night in Dublin. The European Tour posted a video on Twitter of Lowry, still dressed in all black from his final round with his cap flipped back. He was holding the claret jug in his right hand and a beer in his left as he belted out “The Fields of Athenry,” an Irish folk ballad that has become popular for Irish sports fans.

It might as well have been a celebration for all the majors this year.

Nothing could top Tiger Woods in the Masters, which dwarfed an otherwise four-month stretch of compelling outcomes.

Brooks Koepka had a major season not seen since before Woods began having surgeries, and the run is not over. He joined Woods as the only back-to-back PGA Championship winners in stroke play. He had chances in the final hour at the Masters and U.S. Open. And he was three strokes behind going into the weekend at the British Open, where he wound up in a distant tie for fourth.

Thanks to the PGA Championship moving from August to May, all Koepka has done in the last 12 months is win two majors, finish runner-up in two others and tie for fourth. Along the way, he joined some elite company. Koepka, Woods, Jordan Spieth and Jack Nicklaus are the only players to finish no worse than fourth in all four majors in the same year.

More: Shane Lowry proves there’s ‘no border when it comes to golf in Ireland’

“This week is disappointing, but the rest of them … it’s been great,” Koepka said Sunday. “I’m not going to lie. It’s been fun.”

Their victories were special in their own right.

Already popular with his peers, Woodland won over golf fans around the world with his gracious support of Amy Bockerstette, the 20-year-old with Down syndrome who played one hole with him in the Phoenix Open pro-am and made par from a bunker on the 16th hole. She also inspired him with three words that he kept thinking about in the final round of the U.S. Open at Pebble Beach: “You got this.”

Lowry wrote the perfect ending to the return of the British Open to Northern Ireland after 68 years. Sure, the focus of a sellout crowd at Royal Portrush was on Rory McIlroy, Graeme McDowell and Darren Clarke at the start. But as Lowry so beautifully and simply said when his name was on the claret jug, “Everyone knows we’re all one country when it comes to golf.”

Woods should win anyone’s award for best performance, even in the year of a World Cup when England’s victory in cricket was amazing.

It just doesn’t seem that way.

Rewind to April and find Woods trailing by two shots going into the final round of the Masters, a position from which he has never won. It had been two years since he suggested at the Champions Dinner he was done, only to fly across the Atlantic in a desperate search for help before realizing fusion surgery — the fourth procedure on his lower back — was the only route to a healthy life.

Then he capped off his comeback with a flawless back nine to win a fifth green jacket and a 15th major, three short of the record set by Nicklaus. And then he took a month off and missed the cut at the PGA Championship. He tied for 21st in the U.S. Open at Pebble Beach, but only because of six birdies on his last 12 holes. He took a vacation to Thailand, spent a month away from golf and then missed the cut in the British Open.

It was a reminder that while Woods is able to win on the biggest stage — none bigger than Augusta National — he also has weeks where his back or his game, and sometimes both, don’t allow him to contend.

It doesn’t look great now. It will later. Golf now waits nearly nine months until the next major. The longer the year goes on, the stronger memories will be of what he did at the Masters far more than the other three.

If there was disappointment, look no further than McIlroy, who finished a combined 25 shots behind in the Masters, PGA Championship and U.S. Open, and lasted only two days at Royal Portrush. Ditto for Dustin Johnson, still stuck on one major, which stings even more considering he had a pair of runner-up finishes.

A generation ago, Colin Montgomerie said it was tough to win majors because of Woods, which meant fewer opportunities for everyone else. That’s truer now than it was then. Spieth has gone two years without winning anything. Justin Thomas was slowed by injury.

Tougher still is waiting 263 days from the end of the British Open to the start of the Masters.