Rocket Mortgage Classic tickets on sale next month, starting at $15

Tournament organizers are getting a head-start on ticket sales for the Rocket Mortgage Classic, which is moving up on the PGA Tour's schedule.

Rocket Mortgage Classic tickets on sale next month, starting at $15

Detroit — Tournament organizers are getting a head start on ticket sales for the Rocket Mortgage Classic, which is moving up on the PGA Tour's schedule this season.

There will be a brief two-week window leading into Christmas, set for Dec. 9-22, when fans can buy tickets at RocketMortgageClassic.com. 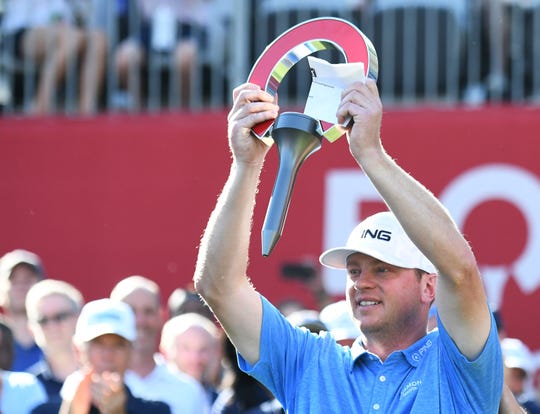 This year's Rocket Mortgage Classic is set for May 28-31, moved up on the schedule because of the addition of Olympics competition this summer.

The inaugural Rocket Mortgage Classic, the first PGA Tour tournament in the city of Detroit, was a sellout, drawing an estimated 40,000-plus. The PGA Tour declines to release exact attendance figures.

“With our tournament dates moving up a month, and our first day open to the public set for Memorial Day, we know the demand for tickets will top the incredible excitement we saw for the tournament’s first year," said Jason Langwell, executive director of the Rocket Mortgage Classic.

Again in 2020, the tournament will offer free tickets to active or retired armed-forces members (limit of two), and free grounds passes for those 15 and younger (unlimited). Armed-forces tickets can be reserved starting in January, while youth passes can be picked up at the box office without any advance reservation.

Also back in 2020 will be the Area 313 Celebrity Challenge, a three-hole exhibition from holes 14-16, on the Tuesday of tournament week.

It's not yet clear how the move on the schedule, to the week before Jack Nicklaus' Memorial in Ohio, will affect the field in Detroit, though Rocket Mortgage pichman Rickie Fowler again will headline the 156-player field, while Bubba Watson recently committed to returning in a Twitter post. The RMC again is sandwiched between two majors, falling two weeks after the PGA Championship and three weeks before the U.S. Open.

Nate Lashley won the inaugural Rocket Mortgage Classic for his first PGA Tour victory, and he will be in Detroit this week riding on the tournament's float in the Thanksgiving Day parade. He will hit foam golf balls into the crowd.