Dan Gilbert has been back in the office and could soon be making his first public appearance since suffering a stroke last May, Quicken Loans CEO Jay Farner said.

Detroit — Dan Gilbert has been back in the office and could soon be making his first public appearance since suffering a stroke last May, Quicken Loans CEO Jay Farner said.

Speaking Wednesday at Detroit Golf Club to help announce more than $1.2 million raised for local nonprofits from last summer's Rocket Mortgage Classic, a first-year event on the PGA Tour, Farner said Gilbert, the founder and chairman of Quicken Loans as well as founder and chairman of the Rock Ventures, is getting back to focusing on the future. 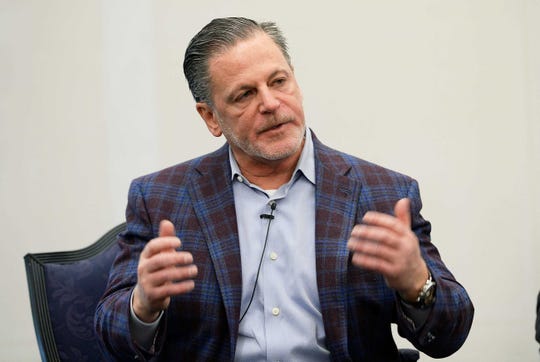 Dan Gilbert has been back in the office and could soon be making his first public appearance since suffering a stroke last May, Quicken Loans CEO Jay Farner said. (Photo: Clarence Tabb Jr., The Detroit News)

“He's getting in the office more and we’re talking to Dan on a regular basis now,” Farner said. “His passion, of course, is the culture. He just released a brand-new 2020 ‘isms’ book that we dropped at everybody's desk here a week ago along with a letter kind of talking about 2019 and how proud he was of the team and kind of just excelling at all of our business areas as we dealt with the challenges that he was facing in 2019. It was a really upbeat letter about the future.

“So you just see him engaging more and more often in the business, but also the work we're doing here in the city of Detroit. That's where Dan's passion is. That's what he wants to talk about. That's where he wants to be focused the vast majority of his time, and that excites our 18,000-plus team members, because we're on a dual mission. We've got to operate great businesses, but our real purpose for doing that is to make sure that we can have a strong impact in our community.

"So, when he's talking like that and that's getting everybody excited. It’s great to see him more engaged each and every day, and I know that'll continue.”

Gilbert, who was spotted in the crowd in downtown Detroit in late December for the annual lighting of the "Menorah in the D" event, had a stroke in May and had been undergoing rehabilitation, according to a Detroit News interview with his wife, Jennifer Gilbert.

Gilbert, who also owns the NBA's Cleveland Cavaliers, returned to Michigan in August after recovering at the Chicago Rehabilitation Institute.

Farner said Gilbert is “excited” about how the first year of the Rocket Mortgage Classic played out and expects him to be able to attend this year’s tournament, which will take place May 28-31 at Detroit Golf Club.

As for Gilbert being out in public before the tournament, Farner is optimistic it could come by Feb. 21 when Gilbert will be honored by Crain’s Detroit Business as its inaugural Newsmaker Hall of Famer.

“I imagine sometime fairly soon,” Farner said when asked when folks would see the billionaire businessman. “I saw an article about some newsmaker activities that are occurring and I'm hopeful that Dan will be out to kind of talk about that here soon.”