Thursday's golf: Clark shoots 10-under 61 to lead Phoenix Open by 2

Wyndham Clark beat darkness — and everyone else Thursday at TPC Scottsdale.

Thursday's golf: Clark shoots 10-under 61 to lead Phoenix Open by 2

Scottsdale, Ariz. — Wyndham Clark beat darkness — and everyone else Thursday at TPC Scottsdale.

Playing in the second-to-last group off the 10th tee, Clark shot a career-best 10-under 61 to take the first-round lead in the Waste Management Phoenix Open. 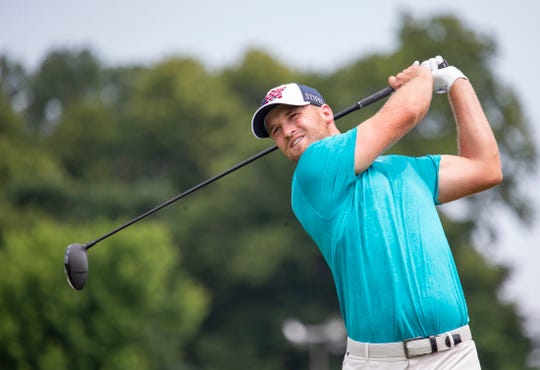 “I hit a lot of fairways and I just gave myself a lot of looks and the putter was hot,” Clark said.

The 26-year-old former University of Oregon player is in his second full season on the tour. He missed the cuts the last two weeks, shooting 69-79 last week at Torrey Pines.

Billy Horschel was second, holing nearly 200 feet of putts in an afternoon 63.

“I looked on the leaderboard and saw I was at 8 under and I saw Billy Horschel was, too,” Clark said. “I said, ‘Man, he’s going to rain on my parade.’ So, kind of to myself I said, ‘All right, let’s go get past him.’”

Horschel had an eagle and six birdies.

“Any day you shoot 8 under, no bogeys, you can’t complain,” Horschel said.

He had the big putting day after working with instructor Todd Anderson.

“We made a couple changes, a couple tweaks to the putting stuff that was a little off,” Horschel said.

J.B. Holmes was another stroke back after a roller-coaster start – highlighted by a hole-in-one – and big finish in the morning wave. He won the event in 2006 and 2008 for his first PGA Tour titles.

“I like playing in the desert. I just enjoy being here,” Holmes said. “The greens are always usually in great shape. They’re in great shape this week – they’re quick, they’re firm.”

The long hitter from Kentucky played the first five holes in even par, following a double bogey on the second, with a birdie on the third, the ace on the fourth and a bogey on the fifth. He used a 7-iron on the 175-yard fourth.

“I didn’t feel like everything was going my way, so I wasn’t thinking it was actually going to go in,” Holmes said. “But I hit it up there. I knew it was a good shot, and I thought I’m going to have a short putt for birdie and then it disappeared.”

Holmes birdied the final three holes and seven of the last 10, hitting to 4 feet on 16 and 17 and closing with a 25-footer. He fought right elbow pain, seeking treatment from his trainer at the turn.

“It’s been hurting a little bit more lately than it normally does,” Holmes said.

Jon Rahm opened with a 67. He can jump from No. 3 to No. 1 in the world with a victory, provided top-ranked Brooks Koepka – tied for 48th in the Saudi International after an opening 70 – finishes out of the top four.

“I’ll take four days of playing tee to green as good as I did today,” Rahm said.

“I’ve played a lot of golf in that, believe it or not, so it felt pretty comfortable,” Thomas said.

The fourth-ranked Thomas shot 68 following a two-week break. He opened the year at Kapalua with his second victory of the season, then missed the cut in Honolulu.

Stephen Ames shot a 9-under 63 on at Marrakech, Morocco, to take a four-stroke lead over a Hall of Fame quartet in the Morocco Champions, the first PGA Tour Champions event in Africa.

Making his season debut, Ames matched the Samanah Golf Club record set by Daniel Brooks in the 2009 Samanah Masters. The 55-year-old naturalized Canadian citizen from Trinidad played the four par-5 holes in 5 under, making an eagle on No. 5 and birdies on Nos. 9, 12 and 18.

“Today was a great day,” Ames said. “I hit the ball very nicely and capitalized with my putting. … The main thing I worked on all week was putting and I putted extremely well today.”

Ames has one senior victory after winning four times on the PGA Tour.

Miguel Angel Jimenez, coming off a playoff victory two weeks ago in the season-opening Mitsubishi Electric in Hawaii, shot 70.

The LPGA says it has canceled the Blue Bay LPGA event scheduled for the first week of March on Hainan Island in China, citing health concerns and travel restrictions due to the viral outbreak.

In a statement Thursday, the LPGA said because of the coronavirus in China, the event scheduled March 5-8 will not be held this year. China has reported more than 7,700 cases of the virus and 170 deaths. The industrial hub of Wuhan and other Chinese cities are on lockdown.

The LPGA said canceling the tournament was a difficult decision and that the health and safety of the players, fans and everyone working on the event is its highest priority.

The LPGA said it is looking forward to returning to Blue Bay in 2021 and for many years to come.