Champ is the second PGA Tour to test positive for COVID-19.

Cromwell, Conn. — Cameron Champ tested positive for the coronavirus Tuesday when he arrived for the Travelers Championship, becoming the second PGA Tour player in five days to have a positive test.

Champ tied for 14th at the Charles Schwab Challenge in Fort Worth, Texas. He did not play last week at Harbour Town and was tested upon arrival at TPC River Highlands. 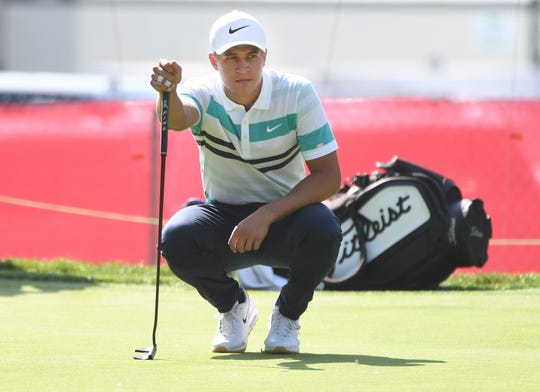 He withdrew from the tournament and must self-isolate for at least 10 days. He can end his self-isolation after 10 days provided he has no subsequent symptoms or has two negative test results 24 hours apart or more. Champ was committed to the Rocket Mortgage Classic next week in Detroit, but now isn't likely to play.

“I feel great physically and I was obviously surprised and disappointed to learn of the test result,” Champ said in a statement released by the tour. “It’s important now to take the necessary steps and measures to protect others, including my loved ones.”

The PGA Tour is expected to release full test results Wednesday after the pre-tournament testing is done.

Players on the charter flight from Hilton Head were given a saliva test on Saturday before they could get on the plane. Others traveling to the Travelers Championship, such as Champ, had to do a nasal swab test.

The tour had contact tracing tests of 11 people who may have come in close contact with Watney, who played the first round of the RBC Heritage and was on the course preparing to warm up when his positive test result was returning. The 11 people had two tests, and all results were negative.