The field for the second annual Rocket Mortgage Classic has officially been finalized, and it just got a bit more local flavor.

Canton native Donnie Trosper, who earned all-Big Ten honors last year in is one season at Michigan State, survived a four-man playoff to earn the final spot into the field at Monday's qualifier at Oakland University's Katke-Cousins course in Rochester. 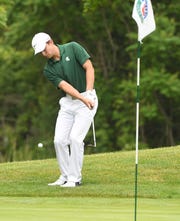 Trosper shot one of four 4-under 67s Monday, then beat Andrea Pavan of Lucas, Texas, Andres Echavarria of Pembroke Pines, Florida, and Wes Homan of Beastville, Ohio, in the sudden-death playoff.

Trosper and Echavarria made a birdie on the first playoff hole to advance, and both made par on the second. Trosper then won it with a par on the third.

Caddying for Homan, by the way, was Detroit Mercy golfer Scott Sparks.

Trosper birdied the 18th hole in his regulation round to get to 67 and make the playoff. He becomes the third Michigan man in the field, joining Jackson native and Oakland alum Brian Stuard and Traverse City resident and Michigan State alum Ryan Brehm.

Trosper, 23, only played the one season at Michigan State, after transferring from Central Florida.

He won the 2018 Michigan Publinx Medal Play Championship, and played at last year's Rocket Mortgage Classic qualifier, as well. This will be his first PGA Tour tournament.

Kurt Kitayama, a former UNLV golfer from Chico, Calif., who has played mostly overseas the last couple years, won the qualifier, firing a 7-under 64.

There were 51 players who teed off, looking for one of those two coveted. spots.

Wednesday: Bubba Watson, Jason Day, Harold Varner III and Wesley Bryan will play a nine-hole exhibition for charity, and it will air live on Golf Channel from 1-3 p.m.

Tickets: None; the event will be held without fans because of COVID-19.