Nolan Eriksen also had a monster game for Clarkston, which ran its winning streak to 27 games. 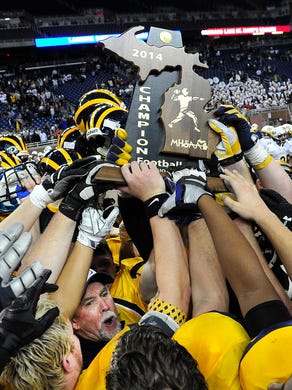 Clarkston quarterback D.J. Zezula gets some air trying to pick up a first down over Saline's Tyrone Miller, left, and Chris Terech in the first quarter. Daniel Mears / The Detroit News
Fullscreen 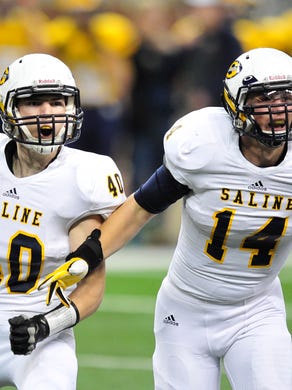 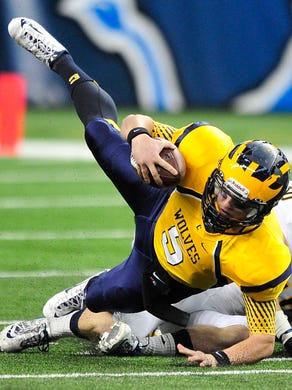 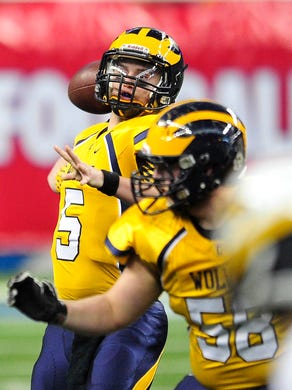 Clarkston quarterback D.J. Zezula draws back for a pass in the first quarter. Daniel Mears / The Detroit News
Fullscreen 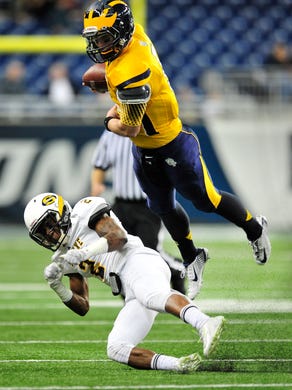 D.J. Zezula gets some air trying to pick up the first down over Saline's Tyrone Miller in the first quarter. Daniel Mears / The Detroit News
Fullscreen 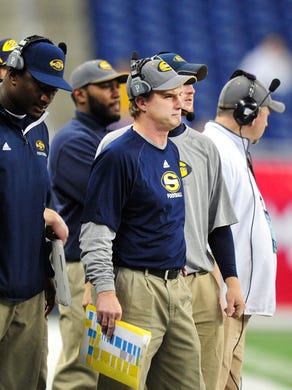 Saline coach Joe Palka, center, observes the action from the sideline with his coaching staff in the first quarter. Daniel Mears / The Detroit News
Fullscreen 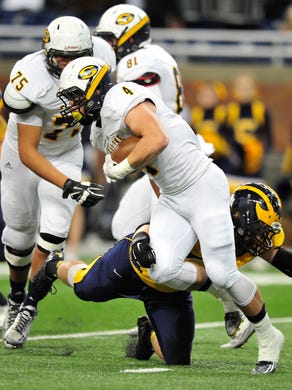 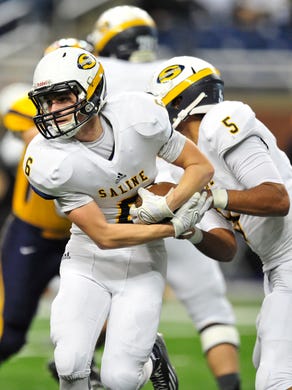 Saline's Jeb Palka and Josh Jackson bobble the handoff and fumble but are able to recover in the first quarter. Daniel Mears, / The Detroit News
Fullscreen

Clarkston's Nolan Eriksen runs for a long first down and picks up an additional 15 yards on a facemask penalty on Saline's Tyrone Miller, right, with teammate Sean Christie in the third quarter. Daniel Mears / The Detroit News
Fullscreen 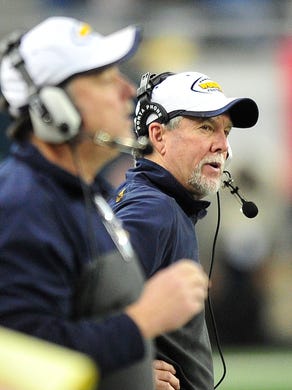 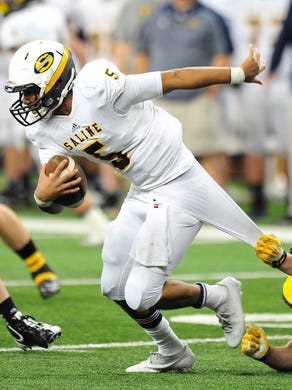 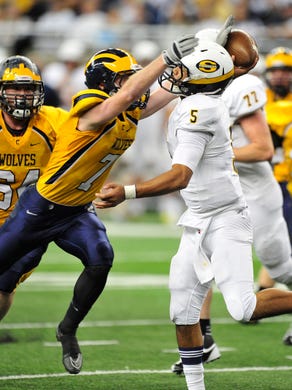 Clarkston's Merrick Canada makes a running catch and takes it into the end zone in front of Saline's Alec Richards for a touchdown in the third quarter. Daniel Mears / The Detroit News
Fullscreen 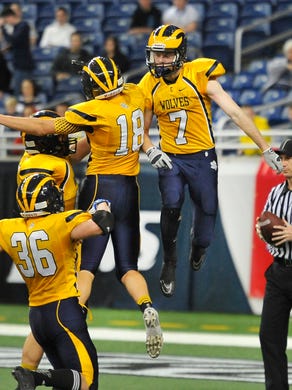 Clarkston's Merrick Canada and Saline's Jeb Palka go after a fumble by Palka, who was able to recover the ball, in the third quarter. Daniel Mears / The Detroit News
Fullscreen 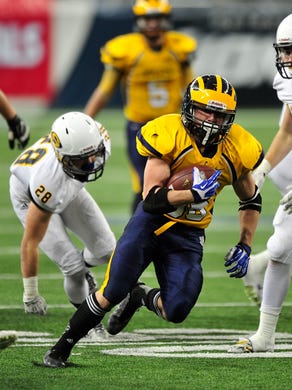 Clarkston's Nolan Eriksen picks up a long first down in the third quarter. Daniel Mears / The Detroit News
Fullscreen 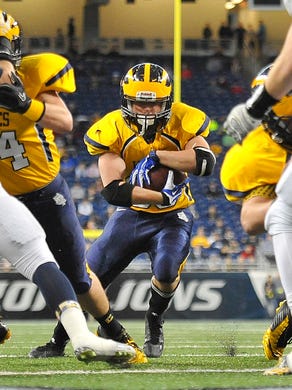 Clarkston's Nolan Eriksen sees the hole made by his offensive line and heads for the end zone for a touchdown in the third quarter. Daniel Mears / The Detroit News
Fullscreen 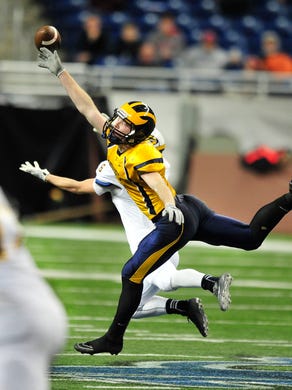 Clarkston's Merrick Canda is able to get a hand on a pass intended for Saline's Jeb Palka for an incompletion in the third quarter. Daniel Mears / The Detroit News
Fullscreen 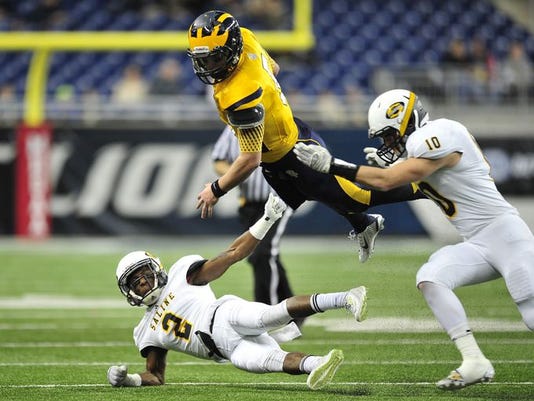 Clarkston quarterback D. J. Zezula gets some air trying to pick up the first down over Saline's Tyrone Miller and Chris Terech.(Photo: Daniel Mears / Detroit News)

Zezula threw a 52-yard touchdown pass to Merrick Canada early in the second half to give Clarkston a 13-10 lead, then broke loose for a 70-yard touchdown run late in the third quarter to open up a 27-10 cushion.

Clarkston led the rest of the way to defeat Saline, 33-25.

Clarkston — ranked No. 1 in The Detroit News' Super 20 poll — finished 14-0 and pushed its state-leading winning streak to 27 games. It was the first state title-game appearance for Saline (12-2), which pulled to eight points down with 1:09 remaining, but couldn't recover an onside kick.

Clarkston piled up 290 yards rushing on 47 carries with sophomore Nolan Eriksen picking up 172 yards on 28 carries, scoring on runs of 4, 2 and 22 yards. Zezula rushed for 120 yards on 17 attempts and completed 6 of 9 passes for 100 yards and a touchdown with one interception.

But no pass was bigger than his bomb to Canada on the opening series of the second half. He pump-faked in the right flat to Jacob Fisher, then fired the deep ball to Canada, who got behind the secondary for the score.

"We knew while watching film that their safeties, corners and linebackers fly to the ball," said Zezula, who still is without a Division I offer and had treatment this week on lower-back muscle spasms suffered from a hit in last week's semifinal victory over East Kentwood. "We beat them in size, but they might have been faster than us, so we did an and-go, we tried to get them on a pump fake and we got them on a pump fake.

"The fake went to Jacob Fisher, who we ran that bubble screen to earlier in the game, so we went with the hard pump fake, they were flying up and Merrick went right by them. It was awesome … executed to perfection."

And, so was Zezula's long TD run.

"I believe Nolan carried the ball three or four times before that, so we faked to Nolan going across and I went the other way," Zezula said. "We had Adam (Matich, right tackle) around pulling and he kicked out that D end. There was seven guys up on the line (for Saline), the middle of the field was wide open."

Matich was thrilled with the play, saying: "I love it when they zoom by me. When D.J. scored I just held up my hands and he was off to the races."

Saline coach Joe Palka said he wasn't used to watching his team give up big plays.

"I think the big thing is we didn't give up explosion plays (in past games), and I can really point to three spots today," Palka said. "We haven't given them up all year, at least in the playoffs.

"We had kids playing aggressively and we took a chance maybe on one of the plays with the blitz. Give him (Zezula) credit though. He's a good quarterback and he had some bursts and made some plays. We had not seen that (speed) with him on the tape we had, but when he went vertical today it seemed like everything parted."

Eriksen was at his best in the third quarter to help Clarkston open up a 20-10 cushion. Clarkston's defense pinned Saline deep, then got the ball back after a punt at the Saline 46. Eriksen got loose for runs of 18 and 13 yards to set up his 2-yard touchdown run for a 10-point lead in the final minute of the third.

Eriksen's performance was similar to his older brother's effort of a year ago when Ian Eriksen — now at Eastern Michigan — rushed for 237 yards on 32 carries, scoring three touchdowns in a 32-14 title win over Detroit Catholic Central.

"I don't really like to compare (myself with Ian), but it was really cool to be able to get the job done and do whatever I could to help my team; scoring was just icing on the cake," said Eriksen, who had 100 or more yards rushing in each of Clarkston's five postseason games, running for more than 1,600 yards for the season.

"He's grown week by week," Richardson said of Eriksen, who has 4.5-second speed in the 40-yard dash. "I don't do much with the offense, other than say, 'Give Nolan the ball.'

"We won this the old-fashioned way. They're all home-grown and I think that's what makes it special."

Clarkston 6-foot-7, 240-pound senior Cole Chewins certainly was special, right from the start of the season when he moved over from his tight end spot to tackle because of an injury. He was outstanding, especially in the first half when he batted down two passes and swatted away a 36-yard field goal attempt that would have given Saline a 3-0 lead after Clarkston fumbled a punt.

"I've grown up playing with these guys since I was seven years old, so when I got asked to move down to offensive tackle it wasn't even a question," said Chewins, who will play at Miami (Ohio). "I was going to do it for my team. We're a unit, and I'd do anything for them.

"And, for the deflections, it was just about playing the game. I was able to make plays."

"He's a great player," Jackson said. "I think he's 6-7 and being able to get his hands up just caused destruction on our offense. He just came up field, and it was hard to get around him."

Jackson played great at times while completing 20 of 31 passes for 237 yards (one interception). He was 3-for-3 for 43 yards during a second-quarter drive that led to Kevin Gross' 27-yard touchdown run, the first points of the game.

After Eriksen scored his first touchdown on a 4-yard run with 33 seconds left in the half to pull Clarkston even, Jackson led a drive from his own 30, running for 18 yards on one play, then 14 on another to set up William Breen's 39-yard field goal as time expired for a 10-7 lead.

Jackson (17 carries, 82 yards) scored on a 1-yard run to pull his team within 27-17 with five minutes left, but Saline failed to recover the onside kick.

His 53-yard toss to Chris Mercer led to Gross' 2-yard touchdown and a Jackson-to-Cameron Cole two-point conversion made it 33-25 with 1:09 left. But again, Saline failed to recover the onside kick.

The outcome left Saline wondering "what if?" Meanwhile, for Clarkston, a legacy has been built.

"Last year was kind of like, let's break the mode with the dark cloud that was over Clarkston," Zezula said, referring to the school winning its first football state title after losing in the semifinals in 2009 and the regional finals in 2012. "This year was just building the legacy, building the tradition here at Clarkston. We did whatever it took to win."