David Goricki runs down the Downriver League’s top players and story lines ahead of the 2015 season. 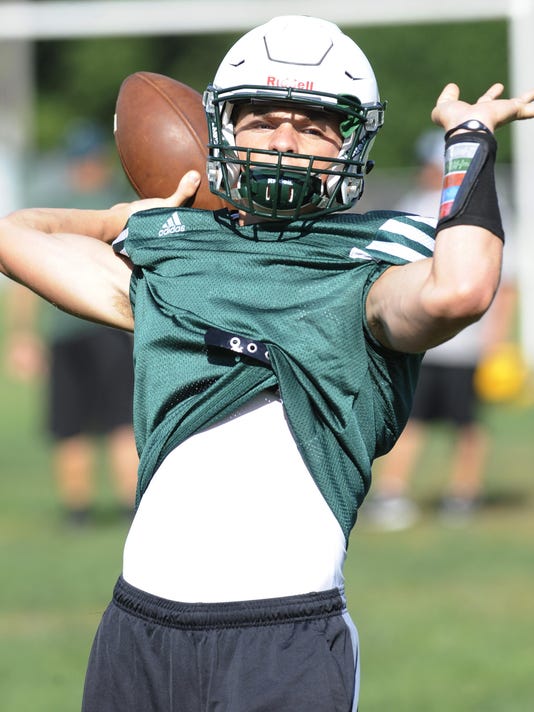 Antonio Mangiapane is back at quarterback at Allen Park, after his team responded with 42 points a game after he took over the spot last season.(Photo: Clarence Tabb Jr. / Detroit News)

1. Trenton quarterback Patrick Czarnecki (5-foot-9, 165) has the ability to do some damage with his arm and legs, starting the last four games his junior year and leading his team to the state playoffs, including a district victory over Romulus.

2. Lincoln Park quarterback Steve Glenn (6-4, 240) is a dual threat with the ability to run over defenders with his size and move the chains through the air with his ability to throw the ball with accuracy.

3. Allen Park quarterback Antonio Mangiapane (6-2, 180) took over the job in Week 4 and led the Jaguars to the state playoffs. Just 15 and still growing, he is dangerous on the roll-out with the ability to do damage by running or throwing.

4. Wyandotte senior Tyler Thorington makes the move from receiver to quarterback, replacing two-year starter Donovan Stewart. Thorington will be on the field nearly every play, also starting at defensive back and kick returner. He is also a standout baseball player, a Western Michigan commit on the diamond.

1. Allen Park put tremendous numbers on the board after Antonio Mangiapane took over as quarterback. The Jaguars averaged 42 points during the final six games of the regular season before suffering a first-round playoff loss to Dearborn Divine Child. They have a dominant offensive line, anchored by seniors Sean Stephens (6-3, 270) and Ryan Compean (5-10, 260) and junior guard Carlos Agens (6-2, 260).

2. Look for Taylor Truman to return to the full-house T offense after struggling to an 0-9 season, scoring just 90 points in the spread last season. Jeff Morrow, who has been with the program since 2006, takes over as head coach. Morrow points out that Truman went 17-3 in 2012 and 2013 with the full-house T, including a playoff win in ’13 before Eric Stiegel left for Grandville. Morrow will look for Joey Herrera to run the show at quarterback.

3. Bob Czarnecki returns to the Trenton sidelines for the 26th season, but this time as a Hall of Fame head coach. He guided Trenton to a state playoff appearance last year. “It’s a great honor, a big surprise,” Czarnecki said. “It was never a focal point for me. It’s a great honor for my family and the entire Trenton community.”

4. Carlson offensive coordinator Greg Dolson takes over as interim head coach with Kent Sikora taking a year off. He has reason to be optimistic with Nate Holmgren (5-11, 170) returning at quarterback with receiver Thad Enwerejobi (6-1, 185) to work with. Holmgren completed 70 percent of his passes last season, throwing for 1,036 yards and 12 TDs (just one interception).