Cass Tech blanked Southfield – which was without four-star running back and Michigan-bound Matt Falcon (ankle injury) – 27-0.

With Mike Weber moved on to Ohio State, Rodney Hall planned to be more of a dual-threat quarterback during his junior season at Cass Tech.

Hall showed a little of his running ability against Southfield, picking up 58 yards on six carries, including a 27-yard TD run to open up a 21-0 lead late in the third quarter, before taking a seat on the bench so sophomore Aaron Jackson could get in some work.

"It lets people know I can run the ball a little bit so they'll try not to blitz as much, because they see I can get into the open field and make things happen," Hall said.

Cass Tech coach Thomas Wilcher was satisfied with Hall's play, saying: "I was happy with Rodney's running and I was happy with his passing, we just have to work on catching the ball better." 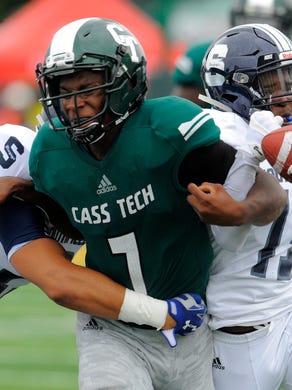 Detroit Cass Tech's Jaylen Kelly-Powell (5) falls in to the end zone for a touchdown. Steve Perez, The Detroit News
Fullscreen