Once she got rolling after an injury, nothing could stop Gia Milana as she helped lead Romeo to the Class A title. 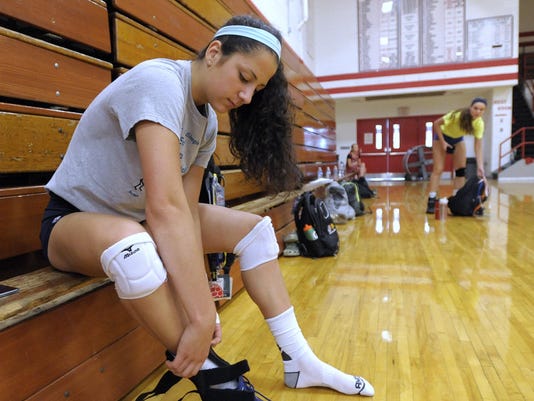 Romeo's Gia Milana, 17, puts on her shoes at the beginning of practice.(Photo: Todd McInturf / The Detroit News)Buy Photo

Gia Milana missed the beginning of her junior season with two stress fractures in her lower back.

But once she got rolling, nothing could stop her as she helped lead Romeo to the Class A state championship.

As she enters her senior season, the 6-foot-2 outside hitter is ready to continue her run, starting the year as the No. 1 player in the The News preseason rankings.

“It feels amazing (to be the defending state champions), walking into gyms with all eyes on us,” Milana said. “It’s the coolest feeling. There’s no pressure, just fun, focusing on what we need to do to be successful.”

Milana, a Maryland commit who participated in the U.S. Girls Youth National team camp this summer, said she made her biggest improvement last year with her passing and court awareness.

Now, she wants to be more consistent.

“I see the floor well,” Milana said. “I can see the next play before it happens. I can anticipate what’s going to happen and guess instead of reacting.”

O’Leary (Michigan) had 1,405 assists her freshman year to help Novi reach the Class A state championship. “What sets her above the rest is her ability to stay calm and keep her teammates calm on the court,” coach Jennifer Cottrill said.

Malinowski had an outstanding freshman season as Clarkston won its eighth straight OAA Red title. “She is a returning outside hitter who will also set for us this year,” coach Kelly Avenall said.

Iacobelli had 642 kills her junior season and a .302 hitting percentage. “Victoria’s control on all apsects of the game was so critical for our success,” coach Jennifer Cottrill said. “Her ability to contact the ball twice and do such with such ease and court awareness was impressive.”

A transfer, Wightman (Oakland) was a dominant hitter for Waterford Lakes last season. “Courtney can hit to just about any spot on the court with power, but is also good at using finesse to score points,” coach Tony Scavarda said.