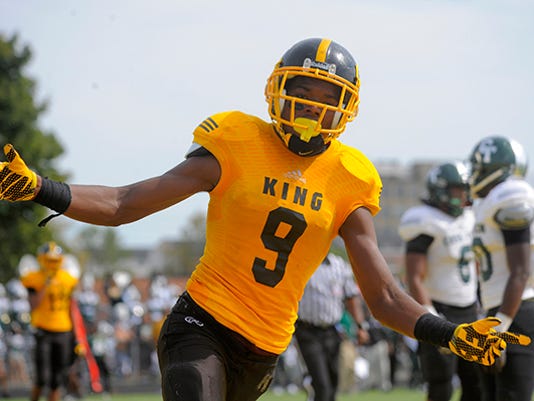 1. Donnie Corley, Detroit King (Michigan State, enrolled) – WR/CB/6-3/190. Corley, a member of The Detroit News Dream Team, had 59 receptions for 1,403 yards and 16 TD as a receiver. He also had 80 tackles and 10 interceptions from his cornerback spot to help the Crusaders to a Division 2 state championship. He hauled in a 39-yard TD reception from Armani Posey on the game’s final play in the dramatic 40-38 title game win over Lowell at Ford Field. He was one of the state’s representatives in the U.S. Army All-American Bowl last month, then announced he was going to play at Michigan State. “He’s the best player in the state with his ability to play multiple positions well on both sides of the ball,” Coach Dale Harvel said.(Photo: Steve Perez, Detroit News)

Detroit King receiver/defensive back Donnie Corley, one of the state’s top high school football players, told MichiganPreps.com he will make his college announcement on Dec. 8, which is his mother’s birthday.

Corley, a 6-foot-3, 190-pounder, is considering Michigan State, Michigan, Tennessee, Ohio State and Notre Dame. The Spartans are considered the leader for his services by recruiting experts.

Corley is ranked the No. 1 receiver in Michigan and No. 20 in the nation bby Scout.com.