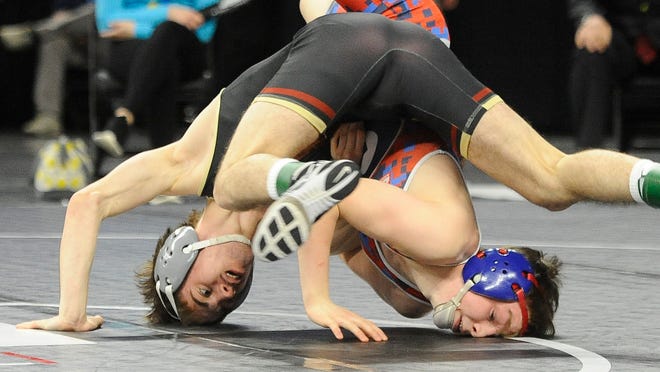 Auburn Hills — On paper, and pretty much everything else, Detroit Catholic Central junior Nick Jenkins was an underdog at 285 pounds going into his state finals matchup against Dearborn Heights Crestwood senior Ali Wahab, who entered the match undefeated.

That didn’t stop Jenkins (39-10) from taking a 5-1 decision for his first Division 1 state title.

And when the clock struck zero?

“It’s crazy,” Jenkins said of the win that came down to the wire. “I feel amazing. I’m on top of the world.”

To say that Hancock was excited would be  understating things.

“How can you not be (excited),” he said, minutes after jumping up and down when the final whistle sounded. “Ali’s a phenomenal athlete. He’s going to Old Dominion next year, a Division I, top-20 program in the country. For Nick Jenkins to knock him off as a junior is incredible.”

He said a lot of work went into the season.

“My coach has been on me constantly to be where I am,” Jenkins said.

“I tell you what, he’s trained pretty dang hard,” Hancock said. “If you’re going to survive in our room at a heavy weight, you’re going to have to train hard. Is he the greatest athlete in the world? Absolutely not. Does he have the will to succeed? He absolutely does, and you saw that.”

Riverview and Melvindale are less than 10 miles apart on a map. The Division 2 finalists at 152 pounds not only grew up close to each other in distance, but in another — perhaps more important — way: They’re friends.

At the end of the hotly contested match, in which Melvindale senior Ameer Munassar (52-1) beat his friend, Riverview senior Brandon Garcia (54-1), 7-5 on a takedown in overtime, the friends walked off the mat with one more thing in common.

Their only losses came to each other. Both came in overtime.

“I lost to him at regionals and that motivated me to work that much harder the next two weeks,” Munassar said. “I’ve waited all year for this moment. It paid off.”

Melvindale coach Faisal Munassar – Ameer’s father – said his son’s match went beyond the holds, grabs and the other technical sides of wrestling.

“(Ameer) said to me after his semifinals match (Friday) ‘I won all these matches to wrestle Brandon,’” Faisal Munassar said. “He didn’t say ‘to win a state championship.’ He wanted it.”

And what does the father think about his son’s state championship?

“Actually, I feel like I’m dreaming,” he said. “I really do. I’m very excited, very happy and very proud.”

A reversal of fortune in D3

When a wrestler successfully earns a reversal, they get two points.

Lake Fenton sophomore Jarrett Trombley not only got two points for his match-winning reversal in triple overtime, but he performed an even bigger one in the process.

Oh, and Trombley (32-0) stayed undefeated in the process.

“I was trying to hold him back from history and make some history of my own,” he said.

The state championship for Trombley is his second in as many years.

“This kid is just amazing,” Lake Fenton coach Vance Corcoran said of Trombley, who transferred from Corunna prior to this season. “He’s a stud. There’s not a whole lot you can improve on.”

Both Trombley and Corcoran said they were confident going into the first overtime, especially after coming back from a 4-0 first period deficit.

“He plays possum,” Corcoran said. “That overtime was just incredible.”

The loss is only the second for Schroeder (45-2) this season.

Laingsburg senior Kevin Koenig quickly made his way to the state finals at 285, with pins early in the first period of the quarterfinals (1:06 vs. Ishpeming Westwood’s Trent Deans) and semifinals (30 seconds vs. Traverse City West’s Charlie Prescott).

“It feels real good,” he said of his second state title in four years. “It’s a little different. I can’t really describe what it felt like. Not very many people get to do a two-peat.”

His plan was simple.

“I’ve been doing that all season,” Koenig said. “I (go for) first period pins.”

Al Willman is a freelance writer