David Goricki of The Detroit News picks his most valuable players from the boys basketball state championship games. 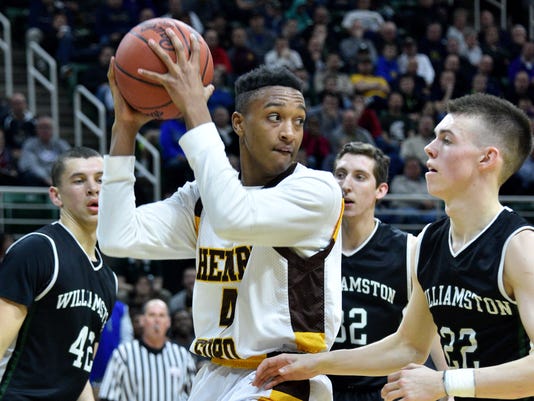 Detroit Henry Ford's Kavon Bey looks for a teammate to pass to under pressure from the Williamston defense in Henry Ford's semifinal triumph.(Photo: Dale G. Young, The Detroit News)Buy Photo

David Goricki of The Detroit News picks his most valuable players from the boys basketball state championship games.

Cassius Winston, senior guard, Detroit Jesuit: Winston was never better than in the championship game, contributing 31 points and nine assists while making 14-of-16 shots from the field in a 69-49 win over North Farmington for the Cubs’ first state championship. He also had a strong performance in the 72-51 semifinal win (27 points, 12 assists) over Macomb Dakota.

Kavon Bey, senior forward, Detroit Henry Ford: After a 21-point, eight-rebound effort in a 70-48 semifinal rout of Williamston, Bey gave up seven inches and several pounds to 6-foot-11 Braden Burke of Stevensville Lakeshore in the title game, neutralizing him for most of the first half while Henry Ford led 27-13 in an eventual 61-47 victory. It was the first state championship for Henry Ford.

Malik Ellison, junior guard, Flint Beecher: Ellison’s 25-footer at the buzzer lifted Beecher to a dramatic 60-59 semifinal win over Detroit Loyola, then he made sure his team successfully defended its title, winning four championships in the last five years with a 21-point effort in a 63-61 title game win over Grandville Calvin Christian.

Dawson Bilski, junior guard, Powers North Central: Bilski made 7-of-12 3-pointers at Breslin, including three in the first half to help North Central battle back from an early deficit against Waterford Lakes in the championship game – while star teammate Jason Whitens struggled in the game’s first 14 minutes – to earn a 59-48 victory to repeat as unbeaten state champs. Bilski scored 15 and had four steals in the final.