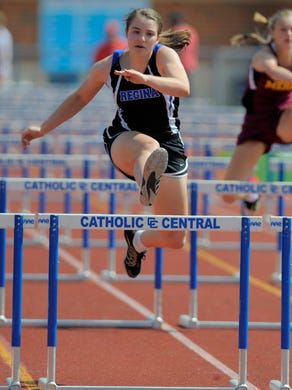 “We just kept the tradition going,” he said. “I’m happy about that. I didn’t want to be the one to step in and say ‘Well, we’ve got to start over.’ ”

McIntosh said former girls coach Tony Mifsa, who is still on staff at the school, stepped down prior to this season but will remain involved with the program.

“Tony’s a great inspiration,” McIntosh said. “I’ve got some heavy shoes to fill, so I’m looking forward to it.”

He said his team is in a good position for states, which will be held next Saturday. All four of its relay teams have qualified.

“We’re hoping to do well there,” McIntosh said. “We’re in the top 10 in all of them, except the 3,200 meter, which we’re trying to get in there. The girls are fired up and they’re looking forward to it.”

In a track relay, the most important thing is the handoff. For Warren Regina’s girls’ 3,200-meter relay team, the handoffs at Tuesday’s Catholic League A-B track and field finals at Detroit Catholic Central were very nearly perfect.

With a time of 9 minutes, 50.27 seconds, the relay team of Jasmine Browning, Teresa Diehl, Julia Roarty and Lauren Valentini beat the A-B record of 9:50.4 set by Regina in 2007.

“They ran a really good time and I was telling them their handoffs were the best I’ve seen in a really long time, of any (relay) team,” Regina assistant John Dunn said. “That’s something we work really hard on. That work has really paid off.”

Browning, the only junior on the senior-laden relay team, said they have a good rhythm, which showed throughout the race.

“The race went really good,” she said. “We all ran well, and we got our fastest time of the season. We’re happy.”

“I don’t know, I just really had it today,” said McNally, whose 1,600-meter time was nearly two seconds faster than her personal best.

It was hot and sunny, with temperatures in the low 80s, and nearly no cloud cover. For distance runners, that often proves to be an issue. Not Tuesday, McNally said.

“It was hard, but it wasn’t too bad,” she said. “I just stayed hydrated all day and I think that helped a lot.”

Gabriel Richard coach Jim Spencer said the race did not go as he expected.

“It was a very good race,” he said. “I didn’t expect the girl who went out (in front) to go out like she did, so Claire was able to pace off of her and then kind of set it up. I like to see her race instead of being out in front and not having to figure out what’s going on. It was a very well-executed race.”

Al Willman is a freelance writer