Brother Rice's Jeff Timko bunts but gets to second base on an error at first in the fourth inning. Daniel Mears, Detroit News
Fullscreen

Brother Rice's Kevin Tyranski slides into home untouched for the first run of the game after consecutive errors by St. Mary's in the fifth inning. Daniel Mears, Detroit News
Fullscreen

Notre Dame Prep's Luke Zerona is tagged out at home plate by Riverview Gabriel Richard catcher Josh Tufts for the final out of the game. Gabriel Richard beat Notre Dame Prep, 5-1, in the Catholic C-D Division championship at Comerica Park in Detroit, Michigan on May 26, 2016. Daniel Mears, Detroit News
Fullscreen

Riverview Gabriel Richard's Zach Loewengruber bunts to advance the runner at first but due to an error at first is able to get to second base in the 5th inning. Daniel Mears, Detroit News
Fullscreen

Riverview Gabriel Richard's Zach Loewengruber is tagged out in a run-down between third and home by Notre Dame Prep's Benjamin Mancini in the 5th inning. Daniel Mears, Detroit News
Fullscreen 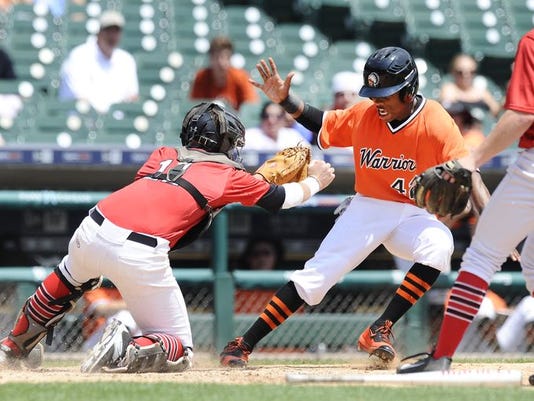 In a must-see matchup, the two Catholic League powers fought for seven innings at Comerica Park on Thursday, ending in a 5-1 Brother Rice victory.

For Brother Rice coach Bob Riker, the feeling of playing at Comerica Park for the CHSL title doesn’t get old.

“No, it never gets old,” Riker laughed. “Because you’ve got a different group of guys here. I mean, there’s guys that played for me last year but when you add one new person, it’s a whole dynamic.”

Riker’s team looked like a group of veterans on the field, most notably starting pitcher Karl Kauffmann, who pitched a complete game. Kauffmann allowed one run and two hits with six strikeouts.

Despite Kauffman’s solid performance, he loaded the bases and allowed one run in the seventh before coming away with the win.

“(It was) just another day playing baseball,” Kauffman said of his confidence level. “Just a little bit bigger stadium, more stands and a little more people here but same approach. I take that approach day in and day out.”

Facing off against his former coach during his playing days, St. Mary’s coach Matt Petry was looking to defeat his alma mater for the second time in five tries this season, but fell short.

“It’s definitely all business,” Petry said of his on-field relationship with Riker. “We want to beat them just as bad as they want to beat us. It’s fun before the game, but once the game starts, we want to beat (Brother Rice).”

Chris Faust had a two-run single in the fourth and Tito Flores drove him in with a double to open up a 5-0 lead for Brother Rice (26-7).

Riker, who played at Tiger Stadium for the CHSL title back in 1985, said he isn’t worried about winning or losing, but rather the experience for his players.

“For me, the gratification comes from watching the kids experience something that I had a chance to experience,” Riker said. “It’s not what you’re doing; it’s who you’re doing it with.”