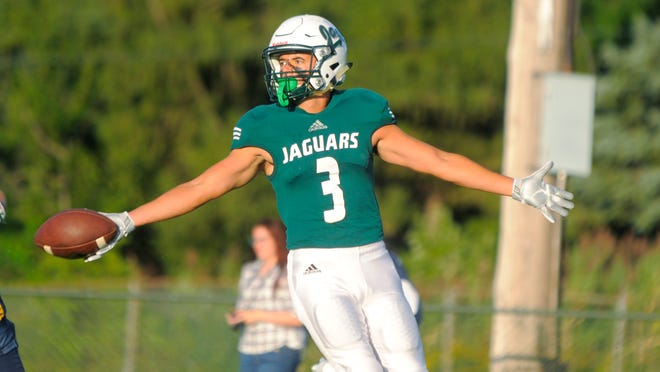 Undefeated Allen Park has outscored its opponents, 100-0, in its first two games.

“Last week, he played 12-15 plays,” Danosky said. “We ran him a little bit more tonight. He took some shots and kept getting up.”

Reid Paffhausen had eight carries for 126 yards and a touchdown, and on defense, Tyler Beachnau had six tackles and an interception

“The kids were ready for this game,” Danosky said. “The kids felt like we should have played better against them last year.”

“They didn’t want that to happen again.” Danosky said.

“I think we need to continue to improve,” Danosky said. “They’ll have their kids ready, and their option will give you fits.”

New Baltimore Anchor Bay 21, Fraser 0: Jacob Paul rushed 16 times for 117 yards and a score for New Baltimore. Jordan Irwin had 160 yards on 19 rushes and Isiah Bailey had a sack.

Warren Cousino 63, Sterling Heights 26: Karry Debose scored three touchdowns and had 248 yards rushing on 30 attempts for Cousino. Ben Maleszyk was 11-of-18 for 147 yards and two scores. Dequan Watson had seven tackles and a sack.