David Goricki of The Detroit News looks ahead at this week’s top games, and looks back at the best from last week. 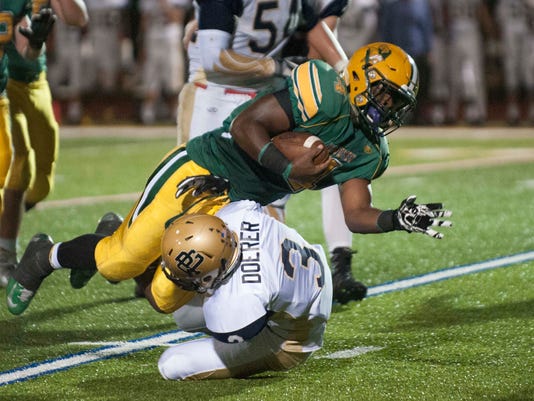 David Goricki of The Detroit News looks ahead at this week’s top games, and looks back at the best from last week.

Detroit King (5-0) at Detroit Cass Tech (5-0), Saturday, noon: Defending PSL champion King swept the two games against Cass Tech last year, but lost the majority of players from that team. The matchup to watch is between Ambry Thomas of King and Donovan Peoples-Jones of Cass Tech. Cass Tech passed a major test with a 56-16 win over East English Saturday with Peoples-Jones returning a fumble and interception for TDs.

Birmingham Groves (5-0) at Farmington Hills Harrison (3-2), Friday, 7: Groves had an unbeaten regular season last year, then blanked Harrison, 10-0, in the state playoffs. It’s winning with defense again, coming off consecutive shutouts against Farmington (45-0) and Birmingham Seaholm (36-0). Harrison lost to Rochester Adams and is in danger of falling to 3-3 with a road game set for next week at Oak Park. Utica Eisenhower 16, Romeo 14: Defending Division 1 state champion Romeo took its first lead of the game with Kade Messner’s 2-yard run, followed by a 2-point conversion run by Ryan Medley with 1:29 left. But Romeo (3-2) left too much time on the board and Eisenhower junior Max Wittwer completed 4 of 5 passes for 30 yards to set up Anthony Tocco’s 37-yard field goal with a second left in the MAC Red showdown to improve to 5-0.

Waterford Mott 27, Walled Lake Northern 26 (OT): Mott came back from a 16-0 first-half deficit to defeat Northern with Keith Fields’ TD run in OT, followed by David McCullum’s pass to Pat Bicknell for the 2-point conversion. Fields rushed for 204 yards, including an 80-yard TD for Mott (3-2). Dylan Moser rushed for 180 yards and two TDs for Northern (3-2).