Junior QB Theo Day has thrown for 1,508 yards and 21 TDs, including more than 600 yards in three playoff wins. 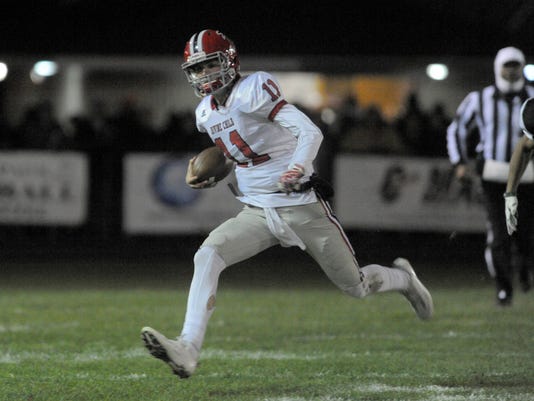 Dearborn Divine Child is the surprise team of the state football semifinals.

On the contrary, Divine Child is more than ready to show it belongs on the same field with Division 3 defending state champion Orchard Lake St. Mary’s on Saturday.

“I’d be shocked if we gave up any points to their jersey,” third-year Divine Child coach John Filiatraut said. “Our kids play for our kids and we play our game and hopefully that’s good enough.”

This season, it’s been a complete turnaround — 10-2, winning its first regional title in 31 years, and entering the semifinals on a six-game winning streak.

But despite the solid leadership of 6-foot-4 junior quarterback Theo Day, Divine Child must contend with a St. Mary’s team that features a handful of Division 1 players, including linebacker Josh Ross (Michigan).

“My strength is throwing the ball downfield while in the pocket, but if things break down I’m all for running,” said Day, who played at Detroit Catholic Central last season. “I’ve been watching the Catholic League my whole life, played against St. Mary’s my freshman and sophomore years, so I know how good they are.

“We’re looking forward to playing them, just have to play our best and see what happens.” What did happen — and might help against St. Mary’s — is Divine Child’s 35-24 Catholic League title game victory over Detroit Loyola. Divine Child had lost seven straight to Loyola, including Week 5, and was outscored 176-27 in games played in 2014 and 2015.

“That was the fifth time we played Loyola in two calendar years and they beat us like 100-0 the first three times and then we were competitive this year,” Filiatraut said. “When we walked off the field, the best thing about that game was the kids were upset, knowing it was right there for them and they handed it to them.

“We got better as the season went on and were focused to play Loyola. Getting over Loyola was a maturing win for us.”

It also helps that Day is putting up some big numbers.

Day — he has offers from Central Michigan, Kentucky and Toledo — has thrown for 1,508 yards and 21 touchdowns, including more than 600 yards during three postseason games.

And he has plenty of help from tight end Liam Soraghan (Northern Illinois) and receivers Quinn Blair and Scotty Combs.

“We run the spread offense and throw the ball around and run it too,” Day said. “It’s been fun throwing to (Soraghan) because you can just put the ball up wherever and he’ll go up and make a play.”

And that is what they hope happens again Saturday.