Rodney Hall is already at Northern Illinois, ready to start classes Tuesday to get a head start on the competition to get on the field to play for the Huskies this fall.

The Detroit News begins its countdown of the top 15 Blue Chip recruits for 2017 with Rodney Hall of Detroit Cass Tech at No. 15.

Rodney Hall is already at Northern Illinois, ready to start classes Tuesday to get a head start on the competition to get on the field to play for the Huskies this fall.

Hall will be trying to take the starting job from Daniel Santacaterina, who was the starting quarterback at the end of the season as a redshirt freshman.

Hall, a 6-foot-2, 200-pound dual-threat quarterback, showed his potential during his senior year, leading Detroit Cass Tech to the Division 1 state championship, matching a state record with five TD passes in a 49-20 rout of Detroit Catholic Central in the title game at Ford Field.

That big stage was a huge way for Hall to end his prep career, especially since a broken fibula suffered in the 2015 state semifinal game prevented him from playing in the state title game as a junior – a 41-27 loss to Romeo.

Hall was still rehabbing from the injury at the beginning of his senior year, resting at times early in the season. Still, he finished with 2,636 yards passing and 28 TDs while rushing for 1,042 yards and 15 TDs to lead the Technicians to their first state title since consecutive championships in 2011-12. He earned the No. 15 spot on The Detroit News Blue Chip list and a spot on The News’ Dream Team.

“It’s definitely a confidence-booster,” said Hall, a three-star prospect, talking about his senior season and state title game performance. “I feel like I had an opportunity to prove myself because I knew I could do it, people around me knew I could do it, so it was great to walk out like that.”

Hall made sure Cass Tech would reach Ford Field, making big plays in the final minutes in the regional final, a 43-42 win over Saline, then in the semifinals, a 32-28 victory over Utica Eisenhower.

In the win at Saline, Hall led the winning drive in the final minutes, first converting a fourth-and-4 play near midfield, then scoring on a 3-yard option run before finding Donovan Peoples-Jones on a slant for the two-point conversion for the difference.

In the semifinal win over Eisenhower, Hall was extremely accurate, connecting on 15-of-21 passes for 183 yards and rushing for 85 yards and a TD. He again came through in the clutch, finding Peoples-Jones for a 20-yard TD strike with 25 seconds left for the winning score.

“That’s the confidence thing,” said Hall, talking of the comeback wins. “In the huddle I told the offense we’re going to score on both of those drives. In the Saline game and on the last drive against Eisenhower I told them we were going to score, to just calm down and relax. I knew we were magical when I looked in everybody eyes and they depended on me and I responded by taking the team downfield to score. It was just tremendous. It was great to see that he (Peoples-Jones) trusted in me and I trusted in him. 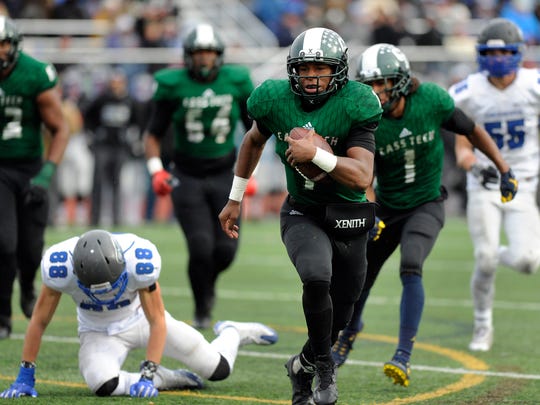 Hall received an offer late from a Pac-12 team but said Northern Illinois was the perfect fit for him. He played in the Offense-Defense All-American Bowl near Atlanta in late December, along with two of his Cass Tech teammates – offensive lineman Jordan Reid (Michigan State) and Kelvin Ateman (Toledo). Perhaps not surprisingly, Hall directed a game-winning drive in the final minutes of that game.

Hall said his success this season followed a lot of hard work.

“It was hard because actually I was rehabbing as we were playing during the season,” Hall said. “The coaches were hesitating, like the Oak Park game (season opener), and kept taking me out, and that was a little frustrating, but they were worried about me making it through the entire season since I was still rehabbing.

“Looking back, it was a good decision on their part because as the season went on I got stronger and faster and the confidence continued to grow.”

Now, Hall will be competing for the starting job at Northern Illinois. He is confident he can contribute right away, since he did just that at Cass Tech, taking over the starting job as a sophomore when he replaced Jayru Campbell. And Hall helped Cass Tech to a 12-1 record, completing 70 percent of his passes for 1,200 yards and 22 TDs.

“My father came up to me (recently) and said, ‘You look at what you did as no big deal, but that’s tremendous,’” Hall said. “I guess he’s right. I was all-state, earned a spot on the Dream Team, was MVP of the state championship game, along with holding all the records at Cass Tech as a quarterback.”