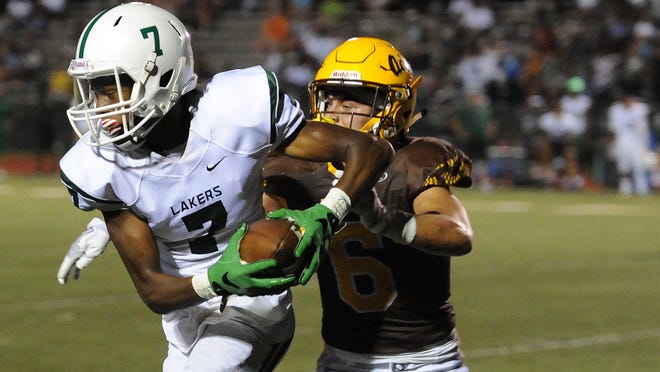 Canton coach Tim Baechler feels fortunate Connor Engel decided to come out for his senior year after sitting out his junior season.

Engel has made the most of his lone season of varsity ball, running Canton’s full-house tight-T offense while keeping opponent’s off balance with his accuracy in the passing game.

It’s been rare to see Canton throw the ball much traditionally, but Baechler isn’t afraid to air it out at times with Engel at quarterback.

“He’s very good for our offense. He’s a good athlete, plays basketball, just a savvy kid,” Baechler said. “He grew up playing football and basketball with Lou (Baechler’s son) as little kids, just couldn’t figure out what position he wanted to play and I kept telling him quarterback, but he didn’t want to.

“He didn’t play as a junior, but came out this year and said, ‘I’ll do whatever,’ and I told him he’d be our quarterback and we started working on it, and he’s good. He can run the ball a little bit. He’s definitely a football player, and can throw it so he’s added a new dimension.”

After a season-opening 41-23 loss to Muskegon Mona Shores, Canton has regrouped to win four straight, averaging 50.3 points and 525 total yards a game.

Engel has completed 17 of 22 passes for 400 yards during the stretch and Canton’s running game has been outstanding, averaging 425 yards during the winning streak with Steven Walker (5-foot-9, 170 pounds) picking up 772 yards and scoring 13 touchdowns on 58 carries.

“He’s special,” Baechler said of Walker, who has 930 yards and 14 touchdowns for the season, but has yet to receive a college offer. “He’s tough, has great vision and is hard to tackle. I think he’ll start turning some heads soon.”

Walker is joined in the backfield by Colin Troup (5-10, 180), who has rushed for 320 yards and three scores during the last two weeks.

“He’s kind of a racehorse type of kid, kind of sleek and quick and we’re trying to make him more of a plow-horse type of guy because he’s a super strong kid and we’re trying to make him realize that, just so he can run hard and break tackles and he’s starting to do it, starting to block well,” said Baechler of Troup. “We use him as a receiver a little bit out the backfield, too.”

Canton’s defense has also been stout of late, giving up an average of 11.5 points and 143 total yards the last four games, led by linebacker Lou Baechler and Walker and Troup in the secondary.

Baechler missed Friday’s 56-12 rout of Novi in a Kensington Lakes Activities Association Black Division game when he broke his arm while sacking Salem quarterback Ryan Young in a Week 4 win.

“Lou’s had a great four games,” Baechler said of his son. “He landed on (his arm) weird as he was sacking the quarterback, like on the third play of the game. He still played two more series with it, just because he’s kind of a throwback.

“Finally the doctor on the sidelines said, ‘I think it’s broken.’ He’s got a spiral fracture in the radius of his forearm. They said he’ll miss four weeks, but I think he’ll be back sooner than that.”

Mott (4-1) is ranked No. 20 in The News’ Super 20 poll and is tied with White Lake Lakeland for first place in the newly formed Lakes Valley Conference.

McCullum has a lot of weapons to work with, including junior Marcus Guerrero, who ran for 175 yards and three touchdowns in a 47-37 upset victory over Division 2 state finalist Walled Lake Western in Week 4.

McCullum threw for 2,500 yards and 25 touchdowns last season when Mott was 6-5, defeating Rochester Adams in the opening round of the state playoffs before losing to Romeo in a Division 1 district final.

McCullum is on pace to throw for 3,000 yards and 30 touchdowns this season. He has thrown for 1,550 yards and 16 touchdowns so far, including a 340-yard, three-touchdown effort in the win over Western.

“Marcus Guerrero is having a tremendous year for us,” Fahr said. “He’s very strong, won our Liftathon so he’s one of the strongest kids on our team. He benches 330, squats almost 500 and runs a 4.5 (40-yard dash). Michigan State (coaches) watched him against Walled Lake Western, were there to watch Dave (McCullum), but I’m sure Marcus got his (Michigan State quarterbacks coach Brad Salem) attention. I think he’s going to blow up (recruiting) pretty quick.”

Guerrero had 600 yards as a backup his sophomore year.

One of Fahr’s most important moves was his ability to talk basketball player Ashton Franklin (6-5, 185) into coming out for football. He had six receptions for 116 yards and a score against Western.

“He transferred in from (Detroit) Country Day and he’s a very good basketball player, and I talked to him and said, ‘Why don’t you give football a try?’ and I’m thrilled he did,” Fahr said. “Probably our best receiver is Matt Bradley, a junior who is really special. He has caught seven touchdowns this season, a 4.5 kid who can jump and is really athletic.”

West Bloomfield is well known for its offense loaded with Division 1 talent, including quarterback Bryce Veasley (Bowling Green) and receivers A.J. Abbott and Taj Mustapha, who are both headed for Wisconsin.

But West Bloomfield showed it has a number of quality players on defense, including four-star junior linebacker Lance Dixon, who is considered the No. 1 outside linebacker in the Midwest for the 2019 class by Scout.com.

In Friday’s 17-16 victory over Rochester Adams, Dixon came up with one big tackle when he grabbed running back Chase Kareta — who tried to go wide on a fourth-and-3 play — at the line of scrimmage in the first half.

Then after Kareta scored to pull West Bloomfield within 17-16 with 2:26 remaining, Adams coach Tony Patritto went for the two-point conversion and Dixon came in and stopped Kareta short of the goal line to put West Bloomfield (3-2) back in the hunt for the Oakland Activities Association Red Division title.

“This was a big win, especially since we came in with a 2-2 record,” Dixon said. “I like playing linebacker, there’s so much action.”

Dixon took a visit to Notre Dame earlier this month and was at Iowa’s game Saturday night, watching Penn State prevail on the game’s final play.

West Bloomfield senior safety and team captain Nick Seidel also made some big plays in the win over Adams, including an interception — his fifth of the season — leading to a field goal.