Receiver and cornerback Jae'veyon Morton provided the biggest play, returning the opening kickoff for a touchdown.

Detroit King quarterback Dequan Finn (5), left, celebrates with teammates after he rushed for a touchdown against Cass Tech in the first quarter. Jose Juarez, Special to Detroit News
Fullscreen

Detroit King player Jae’veyon Morton (22), right, hauls in a pass but is out of bounds as he is tackled by Detroit Cass Tech safety Tyler Milliner (32), and defensive back Jalen Graham (17) in the second quarter. Jose Juarez, Special to Detroit News
Fullscreen 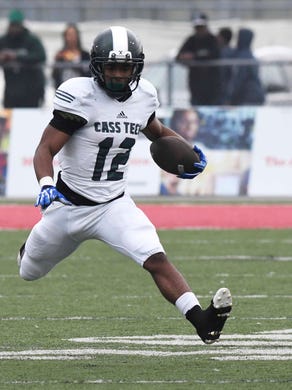 Detroit Cass Tech wide receiver Jevin Swanigan (12) sits on the field after his team gave up a fumble to Detroit King in the first quarter. Jose Juarez, Special to Detroit News
Fullscreen

Detroit King defenseman Marcus Ayers (32) recovers a fumble as Detroit Cass Tech running back Charles Highbaugh (25) tries to get it back, near the end of the fourth quarter. Jose Juarez, Special to Detroit News
Fullscreen

Detroit Cass Tech quarterback Jalen Graham (17), top, tries to console running back Charles Highbaugh (25) after a fumble cost them a chance to score a touchdown against Detroit King near the end of the fourth quarter. Jose Juarez, Special to Detroit News
Fullscreen

Detroit King quarterback Dequan Finn (5) celebrates as he runs off the field with the game ball after beating Cass Tech in a PSL semifinal football game Saturday, King is No. 4 in David Goricki's Week 9 Super 20 rankings. Jose Juarez, Special to Detroit News
Fullscreen

Receiver and cornerback Jae'veyon Morton provided the biggest play, returning the opening kickoff for a touchdown to put King (7-1, 5-0 PSL Black) up 7-0.

“I was really happy when I did that,” Morton said. “I was really surprised, like, ‘Dang, it was that easy?’ I just saw a hole and hit it as fast as I could. I busted one last year against Cass and I just had to step up today.”

No one knew at that point, but Morton’s touchdown was one of the few opportunities either team had to put points on the board. King finished with only 76 total yards. Cass Tech (5-2, 4-0 PSL Green) was able to move the ball a little better, totaling 187 yards, but it was completely negated by five turnovers in the form of three fumbles and two interceptions.

The rain was especially heavy at the beginning of the game when Cass Tech fumbled handoff exchanges twice, and it set the game up for a defensive battle. King coach Tyrone Spencer adjusted his team’s offensive approach when he realized what type of game it would be.

“We had to keep it on the ground, do nothing stupid. Even though our defense was holding up, I didn’t want to put them in bad situations,” Spencer said.

The weather and offensive miscues suppressed the offense, but fast, hard-hitting defenses had something to do with it, too.

Both defenses swarmed quarterbacks and delivered several big hits to their opponents’ signal callers. Cass Tech’s regular starting quarterback, senior Aaron Jackson (Eastern Michigan), could only muster 28 yards passing in the first half and was knocked out of the game by a hard hit just before halftime.

“That was fun. Those are the types of battles I like, hard-fought battles,” Grant said.

Heading into the game, the major matchup to watch was King’s passing game, led by quarterback Dequan Finn against Cass Tech’s secondary, led by cornerback Kalon Gervin, ranked The News No. 1 player in the state. Gervin definitely got the best of Finn in this game within the game. Gervin delivered Cass Tech’s only points on the day, intercepting Finn and taking it back 39 yards for the score.

Finn finished 2-for-11 passing for only 13 yards and no touchdowns, but he did have 25 crucial yards on the ground, including a 5-yard scoring plunge, and he was able to keep turnovers at a minimum.

“This win is really special,” Finn said. “This is a big rivalry game. We did what we had to do to get the victory. The score doesn’t matter as long as we get the ‘W.’ ”

University Prep Academy 30, Romulus Summit 12: Leo Mumpfield passed for 160 yards, including three TDs, and ran 40 yards for a score, and Derrick Howard had an interception for University Prep (3-5). Summit falls to 4-4.