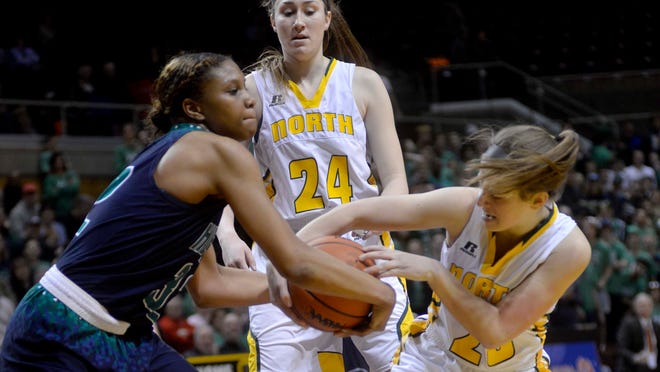 East Lansing (26-0) will play Saginaw Heritage (26-1) in the championship game Saturday at noon.

Nye, a 5-foot-11 sophomore forward, scored eight points during a 20-6 run to open the second half to turn a 30-27 halftime deficit into a 47-36 lead with three minutes left in the third.

Nye scored in transition to end a 6-0 run to start the third quarter, then scored on a short jumper and off a pair of put-backs. She also blocked a shot from Miss Basketball finalist, Clemson-bound point guard Camree Clegg, leading to another transition basket.

And while East Lansing was making 9-of-13 shots during the pivotal third quarter to take a 50-41 lead, Wayne forced some early shots, making just 3-of-13 shots for the quarter and turning the ball over four times.

“This was the first game we had been down going into the third quarter and that really gave us a shocker, a reality check that we needed to come out and play hard because this wasn’t how our season was going to end,” Aaliyah Nye said. “We worked so hard to get here so we just picked each other up and knocked down some big shots.

Wayne held a 25-20 rebounding advantage in the first half, getting 14 offensive rebounds, but only scoring 11 second-chance points. East Lansing did a much better job in the second half, owning a 38-36 edge for the game and limiting Wayne to six points off seven offensive rebounds during the final two quarters.

In fact, it was rebounding that Wayne coach Jarvis Mitchell felt was the difference in the second half.

“Basketball is a game of runs and hopefully you’re on the positive side of runs. They made some tough drives and scored the basketball.”

Nye finished with a double-double (16 points, 10 rebounds), making 7-of-14 shots before fouling out with 3:01 left and her team leading 55-43. Senior guard Amelia McNutt scored 20 and senior guard Aazhenii Nye 11.

Hampton, who was named Miss Basketball last Friday, had seven points (2-of-9, 1-of-6 3-pointers) and nine rebounds.

Wayne 5-10 junior guard Jeanae Terry, who averaged 17.7 points and 6.5 rebounds, struggled offensively (2-of-8 shooting) and fouled out midway through the fourth quarter with five points, eight rebounds and four assists.

Clegg said East Lansing came out with the box-and-one to slow her down, but it wasn’t something other teams hadn’t used on Wayne this season, including Hartland in Tuesday’s state quarterfinal.

Still, Clegg was proud of her team’s accomplishment to reach the Final Four.

“Four years ago we were 0-20 and now the whole community is coming out to watch us, and it’s a great feeling,” Clegg said.