Baseball semifinals: Minzey comes up big at plate, behind it for Bishop Foley

Texas Tech-bound catcher was rock solid at the plate and behind it, going 2-for-3 with a pair of RBIs in Bishop Foley's 7-5 victory Friday.

Baseball semifinals: Minzey comes up big at plate, behind it for Bishop Foley

Gladstone's Carson Shea does some juggling while trying to get the handle on the baseball in the third inning. Dale G. Young, The Detroit News
Fullscreen

Bishop Foley's Liam Pollock does some aggressive base running and it pays off as he manages to get to third safely past Gladstone's third baseman Lucas Weinert. Dale G. Young, The Detroit News
Fullscreen 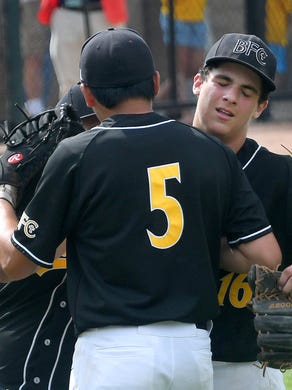 Bishop Foley's Liam Pollock does some aggressive base running and it pays off as he manages to get to third safely past Gladstone's third baseman Lucas Weinert.(Photo: Dale G. Young, The Detroit News)Buy Photo

East Lansing — Texas Tech-bound catcher Mason Minzey did the job at the plate and behind it to help lift Madison Heights Bishop Foley to a 7-5 state semifinal win over Gladstone Friday afternoon at McLane Stadium.

Bishop Foley (19-17-1) — which entered the postseason with a sub-.500 record and has since outscored its six opponents by a 50-9 margin — will try to repeat as Division 3 state champions Saturday at 5.

Minzey played well behind the plate and was equally effective at the plate, getting an RBI single in the first, a double in the three-run third and a sacrifice fly to deep center in the fourth to open up the 6-1 cushion.

“I thought that was gone right off the bat, just the feeling of it, just looking at it I thought it was gone and then when it hit the hill I thought, ‘I’d better getting going’” said Minzey, who is hitting .420 with four home runs, thinking he hit his fifth in the third when he watched the flight of the ball before finally deciding to run when the ball hit the hill just past the warning track in right field. “My sacrifice fly was the hardest ball that I hit today though.”

Bishop Foley Senior Ethan Hoffman, a 6-foot-2 left-hander who will pitch next year at Oakland, gave up just two hits, but walked six and hit a batter. He had a few wild stretches, one in the third when he had a walk and a hit batter to start the inning, but then got a force out and Carson Shea to hit into a double play to end the threat.

“I prepared very well to come into this game,” said Hoffman, who throws in the high 80s. “I knew the umpire was squeezing me a little bit so I wasn’t getting some of the calls that I wanted, but I just had to work around it and do my best.”

Hoffman walked two more in the fourth after retiring the first two batters before getting out of trouble when Gladstone's Jared Crow bounced into a force out.

Gladstone (32-5) got on the board in the fifth without the benefit of a hit, taking advantage of an error and a walk.

In the sixth, Gladstone loaded the bases — a double and two walks — with one out. Hoffman had thrown 100 pitches, but was able to strike out Cooper Cavadeas and Owen Hanson to end the threat before exiting the game.

Gladstone made things interesting against Bishop Foley reliever Braden Mussat in the top of the seventh, scoring four times and sending the tying run at the plate in Cavadeas.

Mussat gave up a hit and hit three batters, including Lucas Weinert on an 0-2 pitch to force in a run, followed by a wild pitch to bring home another run. He then gave up a two-run single by Ben Kelly before striking out Cavadeas to end the game.

“We had our opportunities, had the bases loaded a couple of times, but again we just didn’t get the big hits,” Gladstone coach Don Lauscher said. “They certainly gave us the opportunities, walking guys and hitting guys, but they were a very good hitting team, don’t take that away from them.”

Ken Germain joined Minzey with two hits for Bishop Foley, including a two-run double in the third.

All semifinals and finals at Michigan State