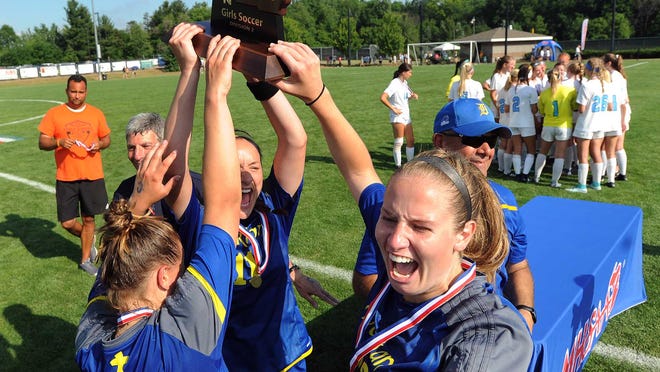 Williamston — Bloomfield Hills Marian is no stranger to winning Division 2 girls soccer championships, having won six with a chance to take its seventh on Saturday evening.

That winning trend continued thanks to a pair of late first-half goals as Marian beat Grand Rapids Forest Hills Northern, 4-2.

"We were hoping to get it to halftime and regroup a little bit," Northern head coach Daniel Siminski said. "It's hard to dig yourself out of a hole like that against a team like Marian. We tried our best and it just doesn't take anything away from (our) season."

This was Northern's third consecutive trip to the championship game, but it is still searching for its first title.

"They're a bunch of winners," Siminski said of his team. "People say we're young, but we're experienced. They found a way all season long and I thought we were going to find a way today."

In the process of capturing a second straight Division 2 title, Marian (22-0-1) finished the season without a loss, racking up 47 straight victories dating to the 2017 season.

"I've said this before, at Marian if we don't win the state championship, unfortunately, people are disappointed," Marian head coach Barry Brodsky said. "But there's nowhere else I'd rather coach. I'd rather coach at a place like that where the expectations are so high that if you don't get it all done, you feel like you've left something on the table."

Marian controlled the game for the most part, holding onto a lead for 67 of the 80 minutes. Chloe Abelarde's goal in the first four minutes set the tone, but the way Marian closed the half was the difference.

Without Annie Bruce's two goals, Marian's winning streak could have been in serious jeopardy.

"(It feels) fantastic," Bruce said. "This is a team effort. I couldn't have done it without any of (my teammates). This is what we worked for all year. It's really surreal."

Elyse DeSchryver scored both of Northern's goals. Jansen Eichenlaub added a goal and an assist for Marian.

Winning isn't easy, nor is playing for a winner, Brodsky admitted. It's been his team's work ethic and coachability that helped it win a second straight state title.

"I can't say enough about the toughness of the Marian kids," Brodsky said. "Our coaching staff is tough. We're not easy to play for and some people can't do it. For the players that stay, they get a good experience out of it and it makes it tougher."

This is Brodsky's third set of back-to-back titles, but he has never earned that third straight.

"Is there motivation (to win three straight)? There is," Brodsky said. "I'm too old to go for another couple of years and try to win back-to-back again. There's motivation to get three, there absolutely is."