Autographed baseballs by members of both the East and West teams wait to be distributed prior to the 37th Annual Michigan High School Baseball Coach's Association's East-West All-Star Game, Friday night, June 29, 2018, at Comerica Park. The annual contest is made up of of 44 Michigan high school graduating senior baseball players, all of whom will be playing college baseball next season. Lon Horwedel, Special to The Detroit News
Fullscreen

Members of the West All-Star team relax in the dugout while waiting for their pregame warmups to begin. Lon Horwedel, Special to The Detroit News
Fullscreen

Grand Ledge High School's Cal Johnston relaxes in the dugout with his teammates prior to the game. Lon Horwedel, Special to The Detroit News
Fullscreen 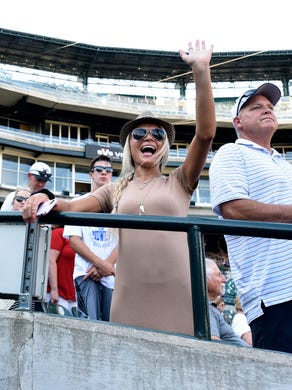 Sam Overmann waves to her boyfriend, Thomas Eitniear, Whiteford High School, prior to the game. Lon Horwedel, Special to The Detroit News
Fullscreen

Heidi Beals takes a picture of her son Lewis, a member of the West All-Star team from Eaton Rapids High School. Lon Horwedel, Special to The Detroit News
Fullscreen

Algonac High School's Luke Stephenson walks off the field with his grandfather, a World War II veteran who delivered the game ball to the mound. Lon Horwedel, Special to The Detroit News
Fullscreen

Members of the West All-Star team watch the player introductions for the East team prior to the game. Lon Horwedel, Special to The Detroit News
Fullscreen

Saginaw Heritage High School's Spencer Schwellenbach gets hit by a pitch in the third inning. Lon Horwedel, Special to The Detroit News
Fullscreen

Zeeland High School's Max Hecht hustles home for a run on a sacrifice fly for the West. Lon Horwedel, Special to The Detroit News
Fullscreen

Grosse Pointe South High School's Davis Graham, right, of the East All-Star team, slides safely into second base for a steal as the ball gets away from Hudsonville High School's Spencer Cable. Lon Horwedel, Special to The Detroit News
Fullscreen

Detroit — They danced along together in the dugout to Miley Cyrus’ 2009 hit single, “Party in the USA."  They got in a heated dispute over which fan won the third-inning dance-off competition up on the scoreboard. Before the game, some of them chased down the Tigers mascot Paws for a quick selfie.

But regardless of the little in-game memories that might one day fade, most players selected for the 37th annual Michigan High School Baseball Coaches Association (MHSBCA) All-Star Game Friday night at Comerica Park were just happy with each other for the weekend.

“You play against a lot of these guys during your career,” said Grosse Pointe South catcher and East All-Star MVP Davis Graham. “To come in, meet a lot of them, build relationships, it’s really cool.”

Whiteford’s Thomas Eitniear of the West All-Stars was the MVP, finishing with two singles and making a diving play at shortstop. Graham was one of four runners to cross the plate in the fourth inning giving a lead it would never relinquish en route to a 6-4 victory.

Fresh off a state championship, Graham attended the game with his coach, Dan Griesbaum, in the dugout. The two ate together at Thursday’s banquet, but Graham, who picked off recent Cleveland Indians draft pick — and Michigan’s 2018 “Mr. Baseball” Spencer Schwellenbach to end the third — joked that Griesbaum tries to leave him alone “as best he can.”

Griesbaum said he was happy to be on hand to watch the final moments of Graham’s high school career.

“He’s had a great career at South, obviously it’s pretty special for him to end it with a state championship,” Griesbaum said. “And then to play here as the culminating event, I’m so happy for him.”

The championship coach said his favorite part of the week was just watching the collection of talent.

“I mentioned last night at the banquet how nice it would be to have a group like this all year long, and just throw out the ball and let them play,” Griesbaum said. “They’re just so good, so talented, and it’s unbelievable to see them all in one place at one time.”

Before the game, Algonac catcher Luke Stephenson not only shared an emotional moment with his family, but the crowd as well. Stephenson escorted his grandfather, a World War II Navy veteran, to the mound to deliver the game ball.

“It means so much to him,” Stephenson said. “He’s a huge Tigers fan, and been a huge part of my life for a while. For him to get honored like that for his service means a lot to him and our family.”

Stephenson said his grandfather “was glad he got a picture with the Tigers girls, too,” after the ceremony was over.

For University Liggett all-stars Noah Miller and William Morrison, who have played together since they both joined the Macomb Hurricanes at the age of 10, Friday’s game was the last time they’d run out on the field as teammates. Morrison will continue his career at Western Michigan and Miller at Wayne State.

“I’ll definitely remember this forever, and especially our relationship together,” Morrison said.

“We’ve known each other for all of our lives, and we’re accomplishing the same things, the same dreams, that ever since we were little we’ve wanted to accomplish, and now we’re doing it together, which is pretty cool.”

The two seniors have played at the home of the Detroit Tigers twice before, but that didn’t make Friday’s event any less special.

“It never gets old,” Miller said. “This is definitely going to be one that I remember and tell the grandkids about.”

Nolan Bianchi is a freelance writer