Trenton used a goal-line stand in the final seconds to come away with a season-opening 27-21 win over Downriver League foe Allen Park in a Prep Kickoff Classic thriller. 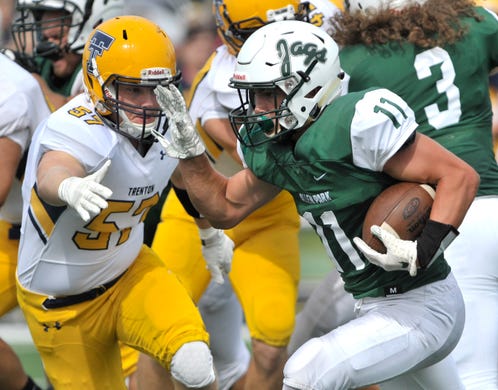 Allen Park Nico Tiberia (11) carries for a 24-yard gain and a first down as Trenton's Max Hatty (57) pursues during the first quarter. Todd McInturf, The Detroit News
Fullscreen 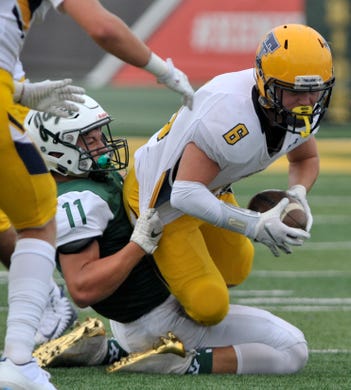 Trenton's Gabe Doree (30) runs for a touchdown while being followed by Allen Park's Nick Arnoldy (5) during the first quarter. Todd McInturf, The Detroit News
Fullscreen 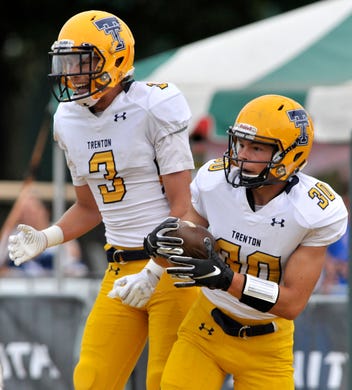 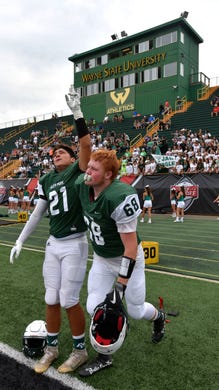 Allen Park's Blake Gilliam (21) points towards the Heavens after he and teammate Zach Nicoletti (68) stand up after kneeling to pray before their game with Trenton. Todd McInturf, The Detroit News
Fullscreen 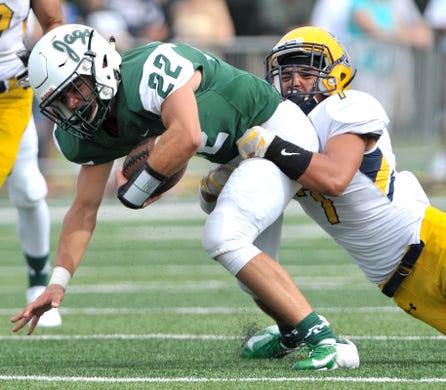 Allen Park's Nick Arnoldy (5) is upended on a first-and-goal carry near the end of the first quarter. Todd McInturf, The Detroit News
Fullscreen 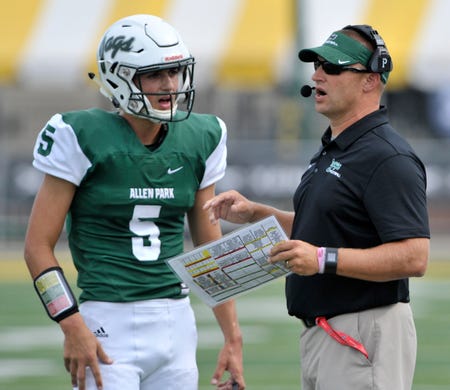 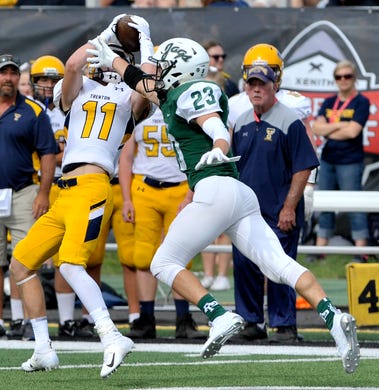 Trenton's Evan Adams (6) lets out a sigh of relief as he hands the football to the official after scoring a rushing touchdown in the second quarter. Todd McInturf, The Detroit News
Fullscreen 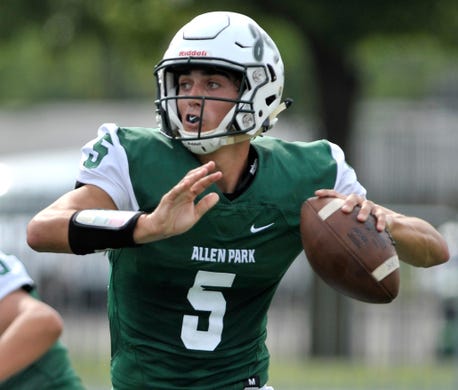 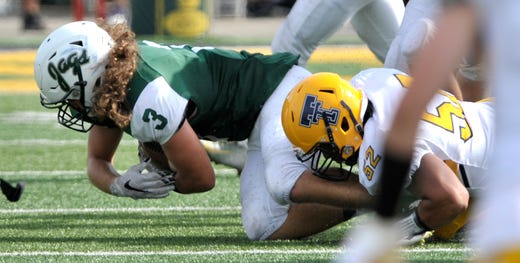 Allen Park's Cole Premtaj (3) recovers a fumble as he is tackled by Trenton's Marco Calo (52) late in the second quarter. Todd McInturf, The Detroit News
Fullscreen 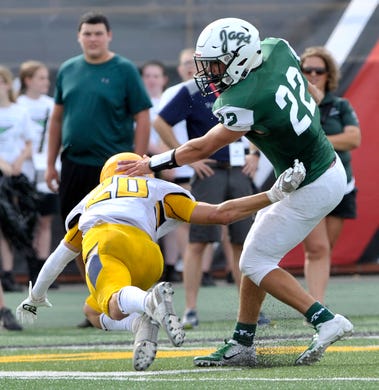 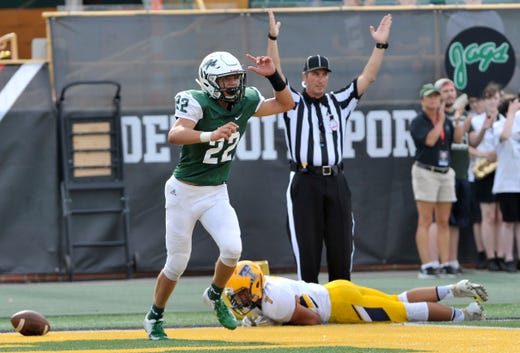 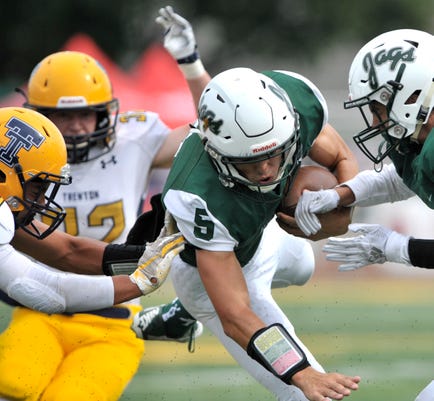 Allen Park's Nick Arnoldy is upended by the Trenton defense on a first-and-goal carry near the end of the first quarter on Friday.(Photo: Todd McInturf, The Detroit News)Buy Photo

Detroit — Trenton used a goal-line stand in the final seconds to come away with a season-opening 27-21 win over Downriver League foe Allen Park in a Prep Kickoff Classic thriller Friday at Wayne State's Adams Field.

Trenton senior quarterback Jay Solano threw for 355 yards and four touchdowns, including scoring strikes of 36 yards to Tyler Rehbein and 29 yards to Gabe Doree during a 2 1/2-minute stretch in the fourth quarter to turn a seven-point deficit into a 27-21 lead with 4:39 left.

Still, Trenton’s defense had to come up big after Allen Park senior Nick Arnoldy led his team from its own 20-yard line to the Trenton 2.

Arnoldy faced a third-and-23 from the Allen Park 7 when he found Nico Tiberia for a 58-yard gain to the Trenton 35 with 3:20 left.

Arnoldy then connected with Blake Gilliam for a 20-yard pass play to put Allen Park inside the red zone. But after a first down at the 2, Tiberia was tackled behind the line of scrimmage by Trenton linebacker Trae Rickman. Then on third down, Trenton linebacker Sam Sauve intercepted a jump ball in the end zone with nine seconds left after a heavy pass rush disrupted Arnoldy.

“I couldn’t even describe it, man, just as good as last year when I threw the game-winning touchdown against these guys,” Solano said of watching Sauve come up with the interception.

Arnoldy was 10-for-10 passing for 137 yards heading into Allen Park’s final drive. He finished 12 of 14 for 205 yards with two touchdowns and the pivotal pick.

“I was just in the right place at the right time,” Sauve said. “I think our line got a lot of pressure on him and he just had to get rid of it. Luck had my back. And, how about his (Rickman’s) tackle? It was an amazing tackle.

"Before that huddle I was going to be in that spot, but I told the coach (during a timeout)  that he should be there because I know he’ll get the job done, and that’s what a team is all about — trust.”

Yes, Trenton called a timeout prior to Rickman’s big stop on Tiberia, who rushed for 118 yards on 21 carries.

“Coaches just told me to shoot through the gap and I just made it happen. He just ran right at me,” Rickman said.

“I was supposed to run an out route and he dropped off and sat down, perfect pass from the quarterback and I slipped a tackler and ran it in,” said Doree, who opened the scoring with a 50-yard touchdown grab on the game's first drive.

Trenton jumped out to a 14-0 lead and Solano looked sharp coming off a junior season where he threw for more than 2,000 yards and 18 touchdowns to lead his team to a state playoff appearance.

On the opening series, Solano connected on 4 of 5 passes for 69 yards, including a one-handed grab by Ethan Riley on a fourth-and-1 throw that helped set up up the 50-yard scoring strike to Doree.

Trenton failed to take advantage of a short field after a turnover on the ensuing kickoff gave it the ball at the Allen Park 22. However, Allen Park’s defense came up big when it stopped Trenton’s screen pass for a two-yard loss, followed by an incomplete pass on fourth down.

Allen Park then moved 74 yards on its opening series to the Trenton 2 before Jakob Marsee was tackled for a loss by Riley on a fourth-and-1.

Trenton pushed its lead to 14-0 with an impressive 97-yard scoring drive in the second quarter. Solano found Evan Adams for a 58-yard pass to the Allen Park 1, which set up Adams’ touchdown run on the following play with 9:30 left in the half.

The momentum turned on a single play when Tiberia sacked Solano and jarred the ball loose, leading to Cole Premtaj’s recovery at the Trenton 23. Allen Park capitalized on the turnover when Arnoldy found Marsee for a 16-yard touchdown to pull within 14-7 with 2:24 left in the half.

Then after Allen Park’s defense forced a three-and-out, Arnoldy found Marsee for a 63-yard touchdown pass to even at 14 with just over a minute left before halftime.

Allen Park took its first lead, 21-14, after scoring on a 72-yard drive to open the second half, with Tiberia running for 42 yards on four carries and capping it on a 26-yard touchdown run.

Birmingham Brother Rice 28, U-D Jesuit 0: Greg Piscopink went 15-for-19 passing for 195 yards and three touchdowns, Colin Gardner had nine catches for 133 yards and three scores, and James Donaldson rushed for 80 yards on 17 attempts and had a 1-yard touchdown for Brother Rice.

Detroit Pershing 38, Melvindale ABT 0: Kiyon Gadson had three rushing touchdowns and caught another score, and Darius Hill had three sacks, a fumble recovery for a touchdown and a blocked punt for Pershing.

Riverview 42, Romulus 12: Dominic Wood had six carries for 107 yards and one touchdown, and Joseph Johnson had eight rushes for 68 yards and two scores for Riverview.