Renaissance players have decisions to make with no hoops coach

Student-athletes have until the fourth Friday after Labor Day to transfer in order to be able to play the second half of the season in mid-January.

Renaissance players have decisions to make with no hoops coach 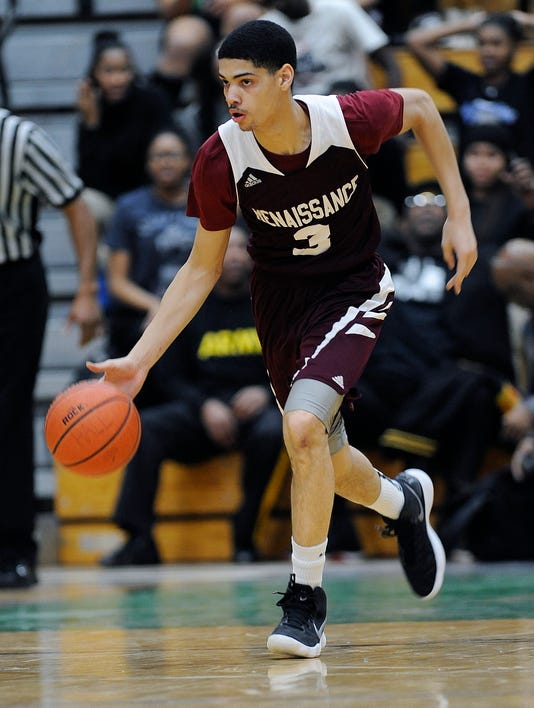 Detroit Renaissance's Chandler Turner is viewed as one of the top players in the Detroit PSL this season.(Photo: Clarence Tabb Jr., The Detroit News)Buy Photo

Detroit — While a handful of top basketball players from the state have already transferred to prep schools across the country this year, it looks like student-athletes from Detroit Renaissance have big decisions to make in the upcoming days following the firing of head basketball coach Vito Jordan.

Jordan had a 68-43 record the last five years at Renaissance, including a 15-7 mark last season. He also guided the program to consecutive Detroit Public School League title game appearances in 2015 and 2016.

Big things were expected of Renaissance this season with the PSL’s top two players returning in 6-foot-7 Carrington McCaskill and 6-5 Chandler Turner, along with 6-6 senior forward Kylin Grant, who moved back to Renaissance, the school he spent his first two years, after spending his junior season in Dallas.

Renaissance gained valuable experience and exposure this past summer when Jordan and his staff took the players to eight camps, including Michigan State and Ohio State.

Jordan was removed as head coach earlier this month by the school’s new principal Verynda Stroughter, who offered the job to the former Renaissance coach and current River Rouge coach Mark White. White originally accepted the job before deciding to pass on it.

Jordan’s attorney, Andrew Paterson, filed a lawsuit to keep school officials from conducting interviews with potential coaching candidates and federal Judge Gershwin Drain ordered a teleconference for all parties to discuss the emergency motion on Friday.

“We are thankful that the Court agreed that Coach Jordan’s claims against Principal Stroughter and Superintendent Vitti deserve immediate consideration and review. Although the emergency hearing will not be held until after the MHSAA’s transfer-rule deadline, we are confident that through these legal proceedings, Principal Stroughter and other school district officials will be exposed for the frauds they truly are.”

There will be a hearing Oct. 19 at 9:30 a.m. at the U.S. District Court in Detroit to rule on if Jordan’s firing was unlawful or not since he had an oral contract with the former administration.

“I was hoping to get a hearing early next week to see if I was the coach or not, but that’s not going to happen now until mid-October,” Jordan said. “We were hoping that we’d get that decision by next week because it will already be past that (transfer) deadline, so they are going to have that option to where they want to move — school district, prep school or whatever reason they want to do. I would expect people to start leaving, but either way if there’s any kids still there off that team and I get my job back I’ll definitely be committed to them because I’ve always been committed to them.

“If somebody has the No. 1 team in the state and then you lose a few pieces it’s (championship-caliber team) thrown out the window due to the decisions made by a principal or administration and unfortunate. But I’ll be there to ride it out with whoever is still there.”

Student-athletes have until the fourth Friday after Labor Day to transfer in order to be able to play the second half of the season in mid-January. Renaissance administrators could allegedly say the transfers are athletically motivated and try to prevent them from playing at another school, the same way Macomb Dakota did when Thomas Kithier transferred to Clarkston last season.

Turner said he plans to stay at Renaissance.

“We had big plans so it’s kind of sad but you have to keep pushing, keep moving," said Turner, who added he didn’t see McCaskill or Grant at school on Friday, which is unusual.

"I want them to give the job back to Vito, but I also don’t want to leave. I guess it’s in God’s hands now. I’ve been here for my whole high school career and I just want to finish it out.”

McCaskill’s future is still in doubt.

“I haven’t decided what I’m going to do yet, probably won’t know until the end of the weekend,” McCaskill said. “I didn’t attend school today, just felt like it would be too much tension, too much going on so I sat out today.”