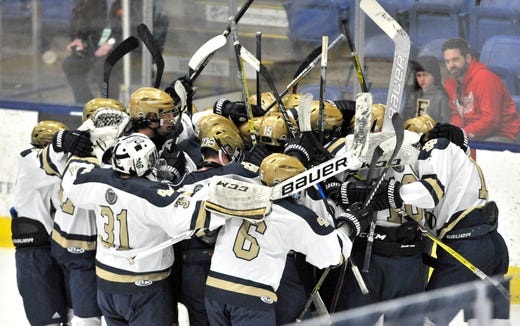 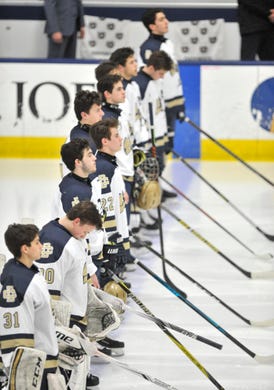 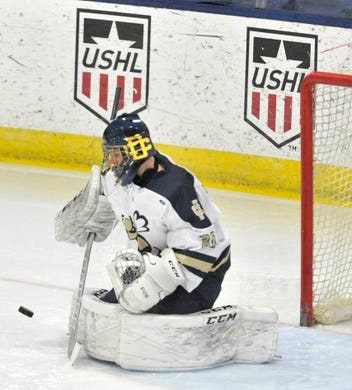 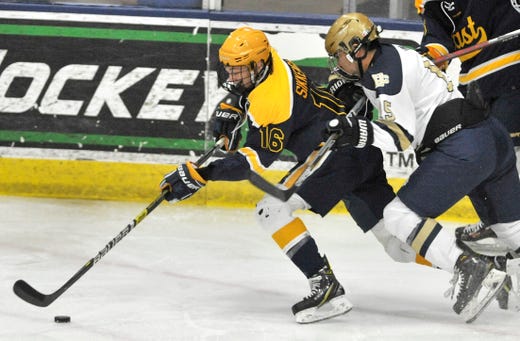 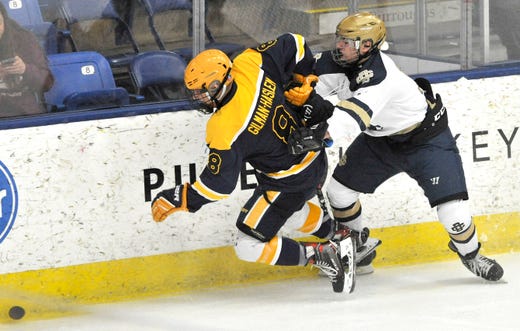 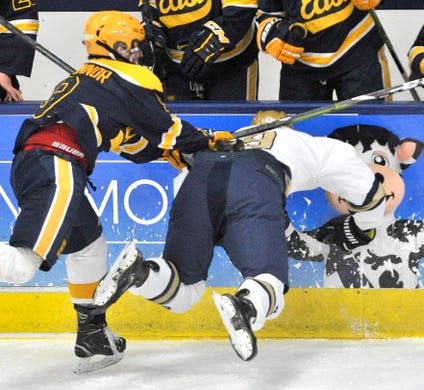 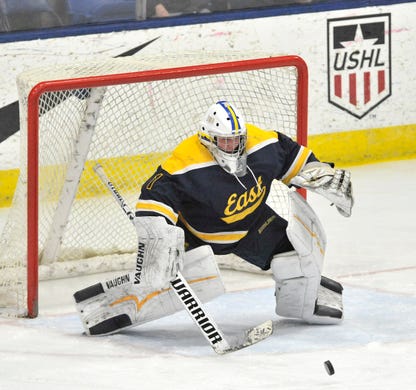 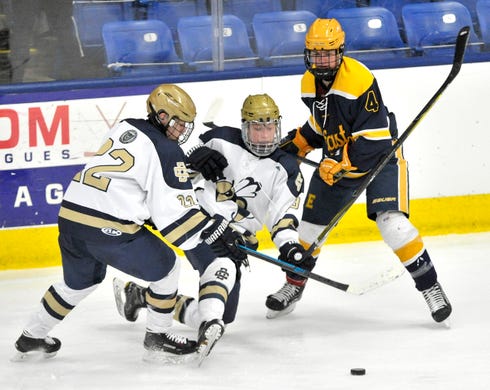 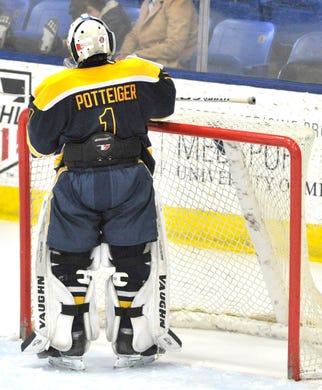 East Grand Rapids goalie Tate Potteiger (1) turns his back on the ice after two goals are scored on him by Country Day in the second period. Todd McInturf, The Detroit News
Fullscreen 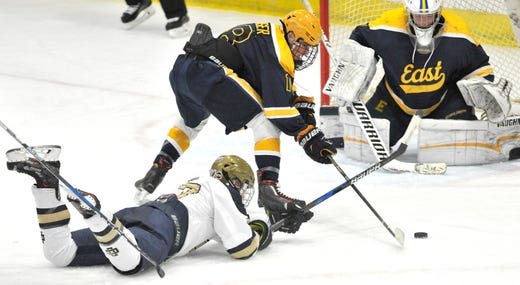 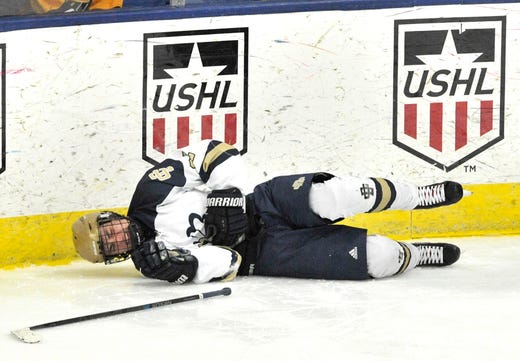 Country Day's Lucas Krol (22) goes down in pain after being hit in the third period. Todd McInturf, The Detroit News
Fullscreen 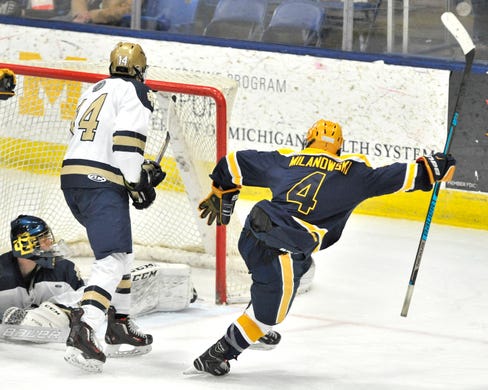 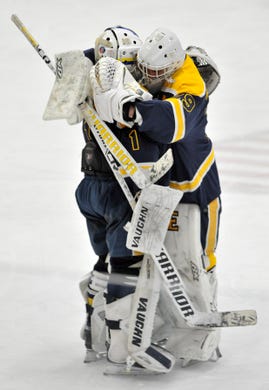 Plymouth — Detroit Country Day had gone 29 years without a state hockey championship but it now has a chance to win its second straight for the first time in school history. 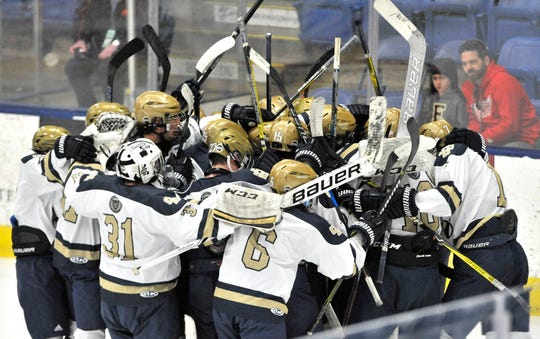 But head coach Frank Novock still felt his team has work to do.

"We weren't great today," Novock said. "Our team wasn't at its best and the guys stepped up and they found a way."

Defense and goaltending stole the show through the first period and midway through the second, but senior forward Mickey VanAntwerp ended a 23-minute scoring drought with 11 minutes remaining.

He added another less than five minutes later to give Country Day (23-4-2) a 2-0 lead which East Grand Rapids couldn't overcome.

"At the beginning (of the game) I wasn't getting good shots," VanAntwerp said. "I was too happy. I just wanted to celebrate with my boys."

Country Day was the aggressor all game and it finally paid off in the second period with those two VanAntwerp goals. The defense allowed just four East Grand Rapids shots in that second period, almost deflating its opponent from the west side of the state. 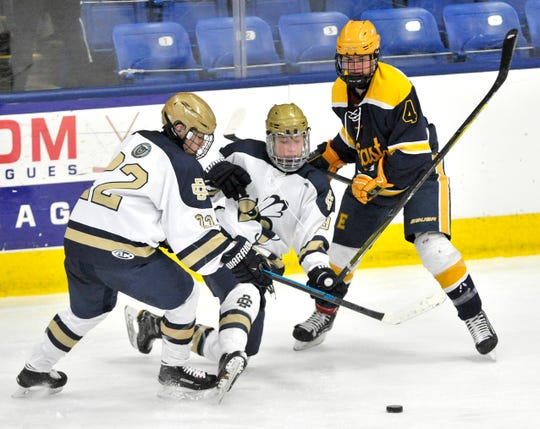 Senior goalie Sam Evola and that Country Day defense have held opponents to just three goals over the past seven games.

"Our team chemistry is probably the best I've seen out of all the teams I've played for," Evola said. "As far as my defensemen, they've been tremendous this whole year and today they were very good."

A late goal with 2:29 left in the game by Nate Milanowski made things interesting as the East Grand Rapids (21-6-1) crowd, which had been silent for two periods, roared to life.

The comeback effort was cut short, though, as Country Day shut the door with an empty-net goal by Logan Gotinsky with 30 seconds left.

"Tate was unreal," East Grand Rapids coach Christopher Newton said. "Being on the west side (of the state), a lot of our guys don't get the attention they probably should. I'm sure this was his coming out party. Everyone will have Tate on their radar for next year.

"We'll be in a good position when Tate comes back next year and he'll have a lot more eyes on him, that's for sure." 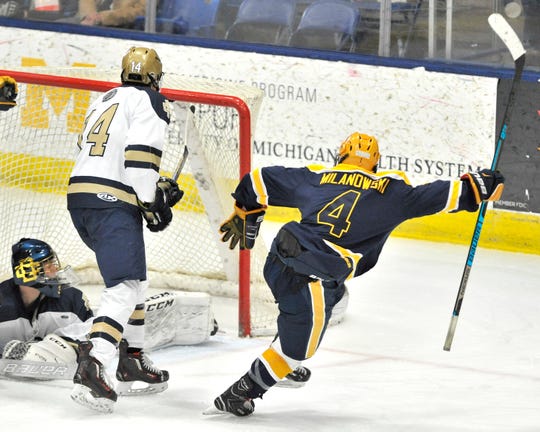 East Grand Rapids loses seven seniors, but Newton believes his program in on the way up.

It gave Country Day all it could handle, and that's something Novock has gotten used to as his team continues to win.

"There's always a bull's-eye on your back winning it last year and teams are going to give you their 'A' game," Novock said. "Everybody here is good. No one is lucky to get to the semifinals."

Country Day will get a chance to record back-to-back state titles on Saturday with a matchup against Houghton at 2:05 p.m.

"We just have to come out and do what we do," Evola said. "It's great to be here but we're not here just to be in the finals, we want to win."