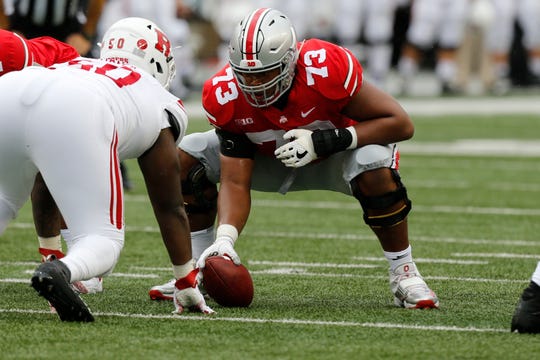 Michael Jordan wasted little time once he stepped on campus at Ohio State to get on the field and contribute, enrolling early in 2016 and then becoming the first true freshman to start on the offensive line since All-American Orlando Pace in 1994.

Jordan — The News Dream Team offensive tackle his senior year at Plymouth High — accomplished a lot during his three-year career with the Buckeyes, playing in every game while starting at left guard his freshman and sophomore seasons before moving to center this past fall.

Jordan went back home to Plymouth to watch the NFL Draft with family and friends and heard his name called by the Cincinnati Bengals with the No. 136 overall pick or the 34th pick of the fourth round on Saturday afternoon.

“It felt amazing, playing for the Bengals has been a childhood dream of mine since I was a little kid and I can’t wait to go fulfill those dreams,” said Jordan, who spent several years growing up in Cincinnati before moving to Michigan to attend high school.

Jordan felt no pressure as a true freshman starting for the national power Buckeyes or having his name mentioned with Pace, an NFL Hall of Famer.

Not only did Jordan start, but he played every game of his career. He’s proud of his versatility, as well as his durability.

“I think it’s pretty much impossible to make it through the entire season without some type of injury so it’s really just fighting through those,” Jordan said. “My versatility is something I can really appreciate now because if a team needs me to play anywhere I’ll do it.”

What position will Jordan play in the NFL?

“It’s at guard,” Jordan said, “and that’s most definitely where I’ll play (with the Bengals).”

“I feel my real strength as a player is my relentless effort,” Jordan said. “I’m going to try to dominate the guy every single time. It’s a wonderful feeling coming from a program like Ohio State. You live up to the standards that being an Ohio State player has and every Ohio State player in the NFL dominates so I look forward to joining them.”