Detroit King gearing up to keep seat on football throne

King will be attempting to win its fourth state championship in five years this fall, which would give it the right to talk about a dynasty.

Detroit King gearing up to keep seat on football throne 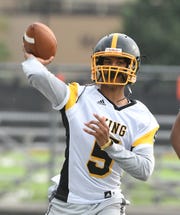 Detroit King will be attempting to win its fourth state championship in five years this fall, which would give it the right to talk about a dynasty.

Winning another state title this year will be challenging with a freshman running the offense following the loss of three-year starting quarterback Dequan Finn (Toledo), who threw for four touchdowns and ran for another in last year’s 41-25 win over Muskegon in the Division 3 final at Ford Field.

But Dante “D.J.” Moore is no ordinary freshman. He had an offer from Michigan before starting eighth grade, and he has already developed a strong chemistry this summer with four-star receiver Rashawn Williams (Indiana) and four-star running back Peny Boone (Maryland).

King showcases the best receiver (Williams) and the best running back (Boone), along with one of top offensive linemen in three-star Deon Buford.

It’s rare for a freshman quarterback to lead his team to a state title, but Jayru Campbell threw for 240 yards and five touchdowns during his freshman year to lead Detroit Cass Tech to a 49-13 win over Detroit Catholic Central in the 2011 Division 1 title game.

Tyrone Spencer and his staff have done an outstanding job after the tragic death of head coach Dale Harvel during the summer of 2016.

Harvel guided King to a thrilling 40-38 win over Lowell in the Division 2 championship game at Ford Field in 2015 when Armani Posey found Donnie Corley for a 40-yard TD catch on the final play.

Harvel suffered a fatal heart attack while at a 7-on-7 competition at King. Spencer took over, displaying what he learned under Harvel while an assistant, then leading King to a 18-0 title game win over Walled Lake Western in 2016.

“We will have seven starters back,” Spencer said. “We lost a lot of production, but I like our kids that we have. We have guys with some experience that weren’t full-time starters, but they started some games. They just have to come into their own. I like how they are progressing.

“I always look at this stuff as making a good gumbo. You have to subtract some things, add some things just to get that mixture and have that team, and that’s what we’re doing.

“They are starting to buy in and jell. They are getting better and better and that’s what I like to see.”

Spencer likes what he sees in Moore.

“Mike Martin left the program and he had a chance to get out there,” Spencer said of Martin, who was competing for playing time at quarterback. “My goal was to play both of them, but he made it easier. And, now with him being gone, Dante has gotten all the reps and has really taken off.

“We’re going to be fine on the offensive side of the ball. We lost Dominick Hannah, but I think Marshawn Lee and Montez Archer in those slots will be pretty good, and we obviously have Rashawn Williams, and then we have some freshmen in Jamell Croft and Kenny Merriweather who will be splitting reps on the outside.”

Williams is looking forward to his senior year in hopes of coming away with a third state championship ring. He had multiple Big Ten offers, getting one from Ohio State his sophomore year, ultimately committing to Indiana this spring.

Williams has confidence in his freshman quarterback.

“He’s a special guy,” Williams said. “I see stuff in him that I don’t see in other players, and for him to be a freshman, he has so much room for improvement. He slows everything down. He knows where to go with the ball and when to do it.

“When you have a running back like Peny Boone, it opens up lanes for me and other receivers to make plays and showcase our abilities. A running back like him, you really have to load up the box to prevent him from a 300-yard game.” 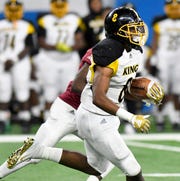 Boone feels right at home at King after transferring from Warren Fitzgerald.

“It took me until my first playoff game to get comfortable,” said Boone, who rushed for 111 yards on 14 carries in the state title game, scoring on a 52-yard run to open a 35-17 lead with 6:29 left. “Once I got used to the speed of the game and the new things that were put in it was over, and it took off from there.

“I’m comfortable with everybody knowing me now, so it should be a great year. I’m expecting a 2,000-yard year, just getting back to where we were last year, the state championship game. I can go outside and inside, but I’m working on my burst though, so I can hit the hole faster.”

Spencer has to fill some spots defensively with the loss of linebackers Rich Miller (Buffalo) and Marvin Grant (Purdue), but defensive back Joe Frazier returns. Frazier had 11 tackles in the state championship game.

Williams will be a two-way player, competing at safety on defense.

King will open the season in the Prep Kickoff Classic at Wayne State on Labor Day weekend against Detroit Catholic Central before a Week 2 home game against Muskegon.

“The last time we played C.C. was in the (Division 1) district final my junior year in 2001,” Spencer said of King’s 34-7 loss that year when Catholic Central went on to win the state title. “We’re looking forward to it.”

And, Spencer and King are also looking forward to a season they hope ends with another state title ... resulting in a dynasty.

King's road to a dynasty

Cream of the crop