The Detroit News breaks down the Catholic League football teams for the 2019 season.

Projected order of finish by consensus of coaches; 2018 records in parentheses.

Catholic Central split with De La Salle last year, winning the regular-season game before losing in the league title game. Jack Beno will be at QB and work behind an experienced line consisting of Steve Kolcheff and Zach Carey. Cole Price and Jace Shular are RBs.

St. Mary’s should climb back up the standings this season and earn a state playoff spot for the first time in three years after losing four games by four or fewer points. George Porritt begins his 30th year and has 29 seniors to work with, including QB Grant Henson and receiver Kameron Arnold.

Adam Korzeniewski starts his third year as head coach, going 7-4 in each of his first two years with a state playoff win. He has three-year starting QB Gregory Piscopink to run his offense, which includes RB Patrick O’Hara and T Luke Newman. 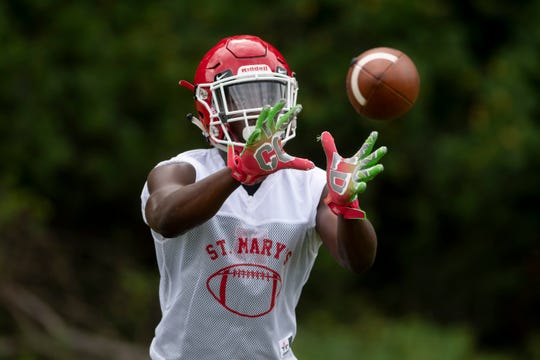 John Callahan’s return as head coach was a good one, bringing Loyola back to the state playoffs last year. He returns 13 starters and has five former players now on his staff. The strength will be up front on both sides of the ball with Derrick Harmon, Hayden Caddell and Adarius Clack leading the way.

Matt Lewis feels right at home now in Year 2 at Jesuit after working as an assistant coach at De La Salle and Saline before taking over the head coaching job last year. He has an outstanding LB in Dorian Mausi and a talented WR in Carson Hinton. Walter Baughman anchors the line.

Divine Child suffered a 1-5 start and missed the playoffs after having to replace QB Theo Day and DL Aidan Hutchinson. The Falcons now have 20 seniors and will be looking for big years from WR Colin Kelley, LB/TE Dawson Stec and OL/LB Brodie Riopelle.

Ben Jones takes over as head coach. He inherits a program that has made five straight state playoff appearances, advancing to the Division 4 regional final in 2017 and losing to Farmington Hills Harrison in a pre-district game last year, 24-10. Jones expects OL/DL Will Kerr to be a key contributor, along with RB/LBs Jack Fairman and Tariq Muhammad.

Gabriel Richard won its first division title in 20 years, defeating Lutheran North 57-54 in a 4OT game, then advanced to the Division 7 regional finals, but lost 20 seniors from that team. Coach Thomas Michalsen will be looking for big production from RB/DL Nathan Palumbo, and two-way linemen Kenneth Esquible and Alex Mastrogiacomo.

Second-year coach Garrett Wenzelburger has an outstanding QB in Angelo Basilisco, who transferred in from Macomb Dakota last year, then led Lutheran North to its first state playoff appearance since 2010. He has a weapon in WR/LB Matthew Drdul and will operate behind a line anchored by Jacob Kukuk.

Liggett showed improvement last year, going from 1-8 in 2017 to 4-5, but now will try to have a winning season, something it did seven straight years (2010-16). QB/LB Ian Narva, WR/LB Drew Zelenak and two-way linemen Giorgio Malkoun are key players.

Brian Barnes is pleased with his numbers – 51 players in program – after ending a streak of four straight losing seasons with an 8-2 record last season. WR/S Klayton Cornell, QB/S Braden Mussat and two-way linemen Zach Proctor are among his top players.