Belleville is the defending league champ and enters as the favorite with multiple Division I players on its roster. 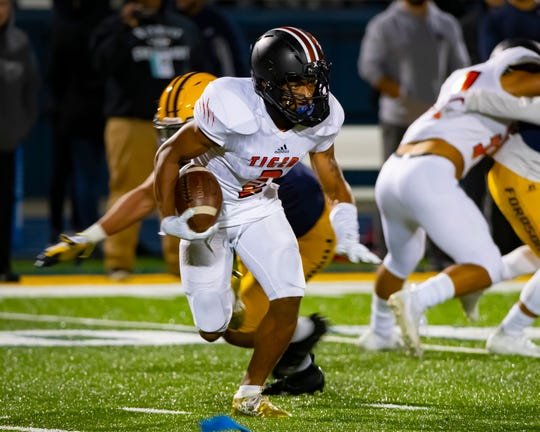 Andre Seldon and Belleville are one win away from repeating as KLAA champs. (Photo: Dave Reginek, The Detroit News)

It’s Week 9 in the high school football season and league championships are on the line. More than that, dozens of teams are trying to get their sixth win of the season to lock themselves in the state playoffs, while others are fighting to get a fifth win hoping that will be enough to get them into postseason play.

One of Friday night's league title games will be between No. 2 Belleville (8-0) and No. 17 Plymouth (8-0) in the Kensington Lakes Activities Association championship game.

Belleville is the defending league champ and enters as the favorite with multiple Division I players on its roster, setting up a David vs. Goliath type matchup.

How big is this game? Well, the winner will more than likely have the opportunity to host three postseason games if it keeps advancing.

Still, Plymouth has plenty of firepower, led by senior running back Mike Mathias (98 carries, 881 yards, 12 touchdowns), and will be trying to do something no other team has been able to do in the program's 16-year history — go 9-0.

“Mike’s having a great year for us, played well on both sides of the ball,” Plymouth second-year coach Brian Lewis said. “Alec Beshears is having an all-state year, playing at H-back, like tight end, receiver on offense and then rover, like an outside linebacker, safety. He’s so versatile and has done a great job for us. He really owned the edge against Canton, and Brighton tried to check everything away from Beshears.”

Plymouth advanced to the Division 1 state title game in 2010, losing to Lake Orion, and won its first eight games in 2011.

Plymouth has played outstanding defense all season. It has surrendered just 68 points and hasn't allowed more than 21 in any game.

Belleville showed its ability to play to the end, pulling out fourth-quarter comebacks in two of the last three weeks. It rallied for a 20-19 win at No. 6 Dearborn Fordson in Week 6 and came back from a 29-25 deficit to earn the title spot with a 39-29 victory at No. 20 Livonia Franklin last week.

“We have to try and limit the big plays and we have to get first downs and move the chains offensively,” Lewis said. “We just have to trust each other and play the football that we’ve been playing all year.”

Catholic Central finds itself in this position after losses to two-time Division 2 state champion Warren De La Salle, 14-3, in Week 6 and to No. 16 River Rouge, 16-3, last week.

Catholic Central found out how difficult it was to beat a tough opponent twice in a short period of time. Last season it defeated De La Salle in Week 8 before dropping a 24-6 decision in the rematch for the Catholic League title the following week.

King will be trying to earn its second Detroit Public School League championship in three years when it faces Denby.

King had little trouble with Denby back in Week 6, with freshman quarterback Dante Moore completing 11-of-14 passes for 232 yards and three touchdowns and Marshawn Lee grabbing five of those passes for 63 yards and a score in a 32-14 victory.

Denby has bounced back nicely from that loss, playing solid defense in consecutive wins over Western (29-0) and Mumford (34-14).

A&T has had a roller-coaster season, shutting out Oxford, 27-0, in Week 7 before suffering a 31-20 setback to Rochester Adams last week. It now needs a win in the regular-season finale to help its case for a playoff bid.

No doubt, A&T has the talent to get the job done with Florida Atlantic-bound quarterback Anthony Romphf and receivers Robert Army and Christian Fitzpatrick, who decommitted from Washington State earlier this month to join his brother, Dez, at Louisville.

Still, River Rouge’s defense will be the difference in this one.

This could be one of the best games of the night with West Bloomfield, the Oakland Activities Association Red Division champion, playing a De La Salle team that has battled back from a 2-3 record with a three-game winning streak.

De La Salle should get in at 5-4, but coach Mike Giannone wants his team entering postseason play with momentum.

More: Prep notes: West Bloomfield kicks it into next gear as playoffs near

De La Salle has allowed a total of 10 points over the last three weeks, including a 22-0 win over then-No. 8 Davison in Week 7.

West Bloomfield coach Ron Bellamy likes how his team is playing and is thrilled to have a healthy Donovan Edwards on board with the four-star junior running back playing at the top of his game.

Edwards suffered a season-ending injury in Week 7 last year and missed the postseason.

The teams have combined to win six Division 1 state championships this decade, but both could be sitting on the sidelines during the playoffs this season.

Clarkston, which won the state title in 2017 and lost to Clinton Township Chippewa Valley in last year’s state title game, was eliminated from postseason play with a Week 8 loss to Lake Orion.