St. Mary’s got a pair of TD runs by Anthony Anton in the second half. 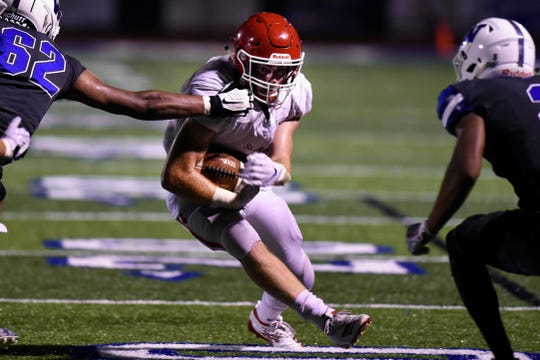 Catholic Central (4-5) defeated St. Mary’s 20-14 in Week 7 to earn a share of the Central Division title, but in much better weather conditions.

“Anton, those were two big-time runs,” yelled out a thrilled St. Mary’s veteran head coach George Porritt while talking to the team after the game.

Anton rushed for 147 yards on 12 carries, with 140 yards on nine carries coming during the second half.

“It was hard, I’ve never played in a game like this where it rained hard the whole game – don’t know how many fumbles there were,” Anton said after the game. “Our team just got it going (second half). Our O-line blocking, tight ends blocking, backs blocking, I couldn’t do it without them.”

Due to the poor weather, it was a sloppy game, with the teams combining for nine turnovers in a scoreless first half, including six fumbles, four by Catholic Central.

The teams had scoring chances, too, starting with a 78-yard run by Catholic Central’s Danny Scott on the first play from scrimmage.

Scott was hauled down by St. Mary’s Kameron Arnold at the 2 and Catholic Central fumbled on the next play with St. Mary’s pouncing on the loose ball to end the threat.

Then, St. Mary’s moved inside the Catholic Central 15, taking advantage of a pair of pass interference calls. But quarterback Grant Henson was tackled for a yard loss on third down and Tommy Doman’s 31-yard field-goal try sailed wide.

Catholic Central’s standout linebacker/running back Brendin Yatooma, a state champion wrestler, broke loose for a 32-yard run near midfield, only to have another fumble end that threat as well.

Catholic Central’s Charlie Mentzer lined up for 37-yard field goal, but the snap sailed over the holder’s head, Mentzer picked up the ball and slipped at the St. Mary’s 48, quickly flipping the field.

“It was an inside run, we sealed the edge, I cut it outside and from there scored,” Anton said.

Catholic Central had the ball near midfield early in the fourth quarter, but a flea flicker resulted in a 10-yard loss, followed by a sack by linebacker Christian Teichner of Catholic Central quarterback Jack Beno for another 10-yard loss and CC was forced to punt after a short gain on third down.

Then, St. Mary’s took over at its own 33 and Anton soon followed with his 58-yard TD run for the 13-0 cushion, pushing him over the 1,000-yard rushing mark for the season.

“It was the same type of play, an inside run,” said Anton of his second TD run. “We sealed the edge, I saw it, cut it up and our O-line and backs did a great job, everyone blocked.”