Christian Dhue-Reid and No. 2 Belleville put on a show, scoring 42 unanswered points in the second quarter. 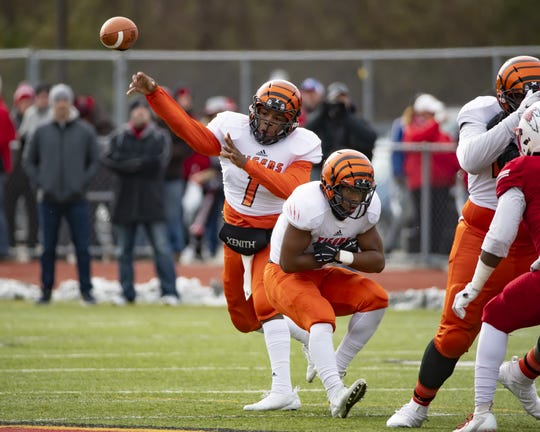 Christian Dhue-Reid (1), seen here in this file photo, completed 13 of 17 passes for 266 yards and 6 TDs in Friday's win. (Photo: Dave Reginek, Special to The Detroit News)

Brownstown Township — Christian Dhue-Reid and No. 2 Belleville put on a show Friday night, scoring 42 unanswered points in the second quarter and going on to dominate No. 15 Woodhaven, 67-14, in a Division 1 district championship game.

And, to think Woodhaven (10-1) could have led 21-0 in the opening quarter if one of its cornerbacks would have intercepted a Dhue-Reid pass with an open field in front of him.

“We stepped up as a team,” Dhue-Reid said. “The defense kind of had its head down (in the first quarter) and I told my offensive line and I told my receivers to pick everything up and we went on from there. I just put a lot of trust in my receivers and they did the job.”

Woodhaven — which averaged more than 300 yards rushing this season with the option offense — scored on its first two possessions to open up a 14-6 lead with quarterback Josh Waters busting loose up the middle for a 68-yard TD with 3:53 left in the opening quarter to give him 108 yards at the time, and his team 170 rushing yards.

Woodhaven continued to hold the lead and the momentum when head coach Keith Christnagel went for it on fourth and inches on the opening play of the second quarter and 6-foot, 260-pound running back Clarence Corbett moved the chains to the Woodhaven 33.

But, on the next play, Woodhaven fumbled and Belleville’s Ronald Jackson recovered at the Woodhaven 21.

TyTrayon Lewis took the handoff from Dhue-Reid on the next play and broke loose up the middle for the TD.

It would be the first of three turnovers in the half for Woodhaven, all giving Belleville a short field to work with Dhue-Reid making the Downriver League champs pay each time.

“He has a lot of poise and great leadership skills,” Belleville coach Jermain Crowell said of Dhue-Reid. “He’s used to playing in big-time moments.”

However, Michigan-bound Andre Seldon would first work his magic on special teams, taking a punt and returning it 63 yards for a TD to give Belleville its first lead at 19-14, a lead it would continue to build on consistently.

After Belleville solved Woodhaven’s option, Seldon fielded another punt and his 11-yard return gave Dhue-Reid the ball at the 30 and on the second play, he found Darrell Johnson over the middle for a 61-yard TD and 26-14 cushion.

Then, Seldon intercepted a pass to give Dhue-Reid the ball back at the Woodhaven 31 and on the first play he found Deion Burks in the left flat and he sprinted into the end zone, followed by a Dhue-Reid-to-Christian Rapley two-point conversion for a 34-14 advantage.

Seldon’s big night came as no surprise to Crowell.

“He’s an All-American, one of the best players in the country,” Crowell said. “We expect him to make big plays whenever he’s in there.”

Belleville forced another 3-and-out, setting up yet another big play when Dhue-Reid found Michael Jenkins for a 34-yard TD pass — on third and long — for a 41-14 lead with 1:31 left in the half.

Woodhaven advanced inside the Belleville 40 in the final minute of the half, but Waters’ pass was tipped and picked off by Darian Murray, who returned it 33 yards to the Woodhaven 32 with 20 seconds left, leaving plenty of time for Dhue-Reid to find Rapley for a 32-yard TD and 48-14 lead.

That’s 42 points in the final 11 minutes and 16 seconds of the half with Dhue-Reid connecting on 7-of-9 for 174 yards and the four TD passes.

Belleville’s defense was just as impressive, limiting Woodhaven to minus-4 yards on 17 plays during the pivotal quarter while forcing the three turnovers.

Belleville scored on its first two series of the third quarter to put the running clock in play with Dhue-Reid finding Johnson for his fifth TD pass of the game, a 2-yarder which was set up by Deshaun Lee’s 26-yard run.

Dhue-Reid’s night was then finished, but Belleville put two more points on the board when Woodhaven fumbled in its end zone late in the third.