Sophomore guard, who is heralded as the nation's top high school player, lived up to his billing by taking control down the stretch in 75-68 win.

Ypsilanti — Emoni Bates made the plays down the stretch to help Ypsilanti Lincoln pull out a thrilling 75-68 win over No. 18 Detroit Edison Public School Academy on Monday night in the MLK Day Showcase at the Convocation Center.

Bates, a 6-foot-9 sophomore guard who is considered to be the best high school player in the country, scored 34 for defending Division 1 champion Lincoln, which improved to 6-1 and ranked No. 3 in The News Super 20 poll. 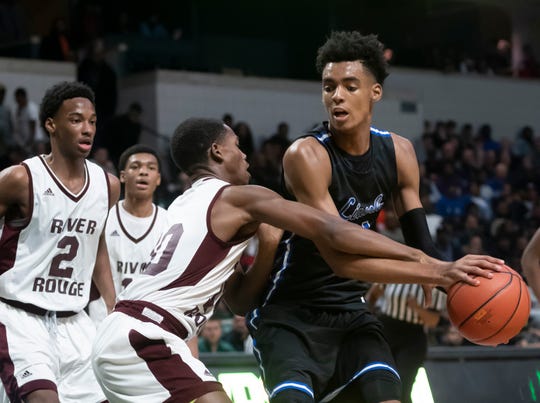 Edison's 6-foot-7, 260-pound Bryce George scored eight straight points, including a 3-pointer and a three-point play (basket and free throw) to open a 66-62 lead with 2:46 left.

Then Bates went to work with a lot of help from freshman guard Braelon Green.

Green made both ends of a 1-and-1 before Bates dunked off a steal to pull Lincoln even at 66. After Raynard Williams scored on a driving layup, Bates made a 3-pointer to give Lincoln a 69-68 lead with 1:20 remaining.

Williams, who is averaging 17 points and shooting 57 percent from 3-point range, missed two long-range shots in the final seconds and Green (17 points) made two free throws with 6.5 seconds left as well as a layup as time expired.

Williams led Edison (6-3) with 26 points and George had 14 points, all coming in the second half.

Green was also an impact player during the pivotal second-quarter run, starting it with a driving layup, then scoring off another driving basket for a 28-25 lead and an inside basket off a pass from Bates.

Clarkston 55, Detroit King 41: It took sophomore guard Fletcher Loyer a couple of minutes to get going, but once he did he put on a show in helping No. 4 Clarkston defeat No. 13 Detroit King.

Loyer scored 26. He made 6 of 8 3-pointers, including three 3-pointers in the opening quarter to set the tempo to give Clarkston a 15-12 lead with 7-foot-1 senior Matt Nicholson doing the damage inside.

Then, Clarkston put on a 3-point barrage with Keegan Wasilk making one and Loyer two more during a three-minute stretch and Clarkston opened up a 41-23 halftime cushion.