Players like Macomb Dakota's Ryan Rollins and Waterford Mott's Isaiah Jackson have made names for themselves this season.

And, that’s a good reason the handful of standout players will be among the front-runners for the Mr. Basketball award, which will be given next month. 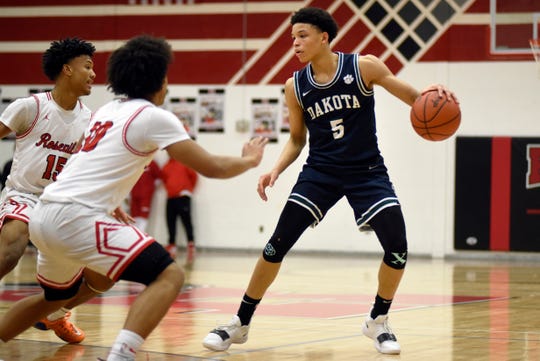 But, there are other outstanding players who have made their name known this season, including Macomb Dakota 6-foot-3 point guard Ryan Rollins and Waterford Mott 6-9 forward Isaiah Jackson.

Rollins, who will play next year at Toledo, has elevated his game for Dakota, which is 14-2 and ranked No. 17 in The News Super 20.

Jackson is playing for his fourth different school in as many years, playing alongside guard Rocket Watts (Michigan State) at Detroit Old Redford during his sophomore season before joining him at SPIRE Academy in Ohio last year.

Jackson is considered one of the top seniors in the nation, signing with Kentucky this past fall, but still fans, and more importantly coaches who vote for Mr. Basketball, are hoping to get a glimpse of him in action before casting their ballot.

Rollins has developed into a strong all-around player, showing his ball-handling ability, passing and scoring from the perimeter, as well as attacking the basket. All those attributed were on display last Tuesday in a one-sided 72-37 win over Roseville.

“I feel like I’ve become a better leader, but I’ve worked on my strength, my shooting, just trying to get better every game,” said Rollins, who had 22 points and eight assists in the win over Roseville. “I’m a combo guard, but point guard right now and that’s been a big part of my game, being the playmaker and getting my teammates involved, knowing where their spots are so they can get easy baskets.”

Rollins has gotten bigger and stronger, now playing at 6-3 and 180 pounds, putting on 15 pounds since last season. He is averaging 27.5 points, eight rebounds, 6.5 assists and three steals and has multiple 40-point games, including a school-record 43 points to go along with 15 rebounds and six assists in an 89-58 win over Harrison Township L’Anse Creuse North Friday night.

“I’m 6-3 or 6-4 with a wingspan of 6-8 so I’m up top in the press and can get my hands on balls and create turnovers to start our transition game,” Rollins said. “I’m a scoring playmaker, look to score first, but a willing passer.”

So, why does everybody know about Johnson? Well, he led Benton Harbor to the Class B state championship his sophomore year, coming up with 24 points and 11 rebounds in the title game win over Grand Rapids Catholic Central in overtime.

Johnson earned a spot on The News Dream Team last season while earning an offer from then-Michigan coach John Beilein. The Butler-bound senior is averaging 25 points, 13 rebounds, six assists, three steals and three blocks for No. 4 Benton Harbor (14-1), including a 17-point, 17-rebound, seven-assist effort in a win over Emoni Bates and Ypsilanti Lincoln last weekend in Grand Rapids.

“Carlos can dominate the game without scoring points,” Benton Harbor coach Corey Sterling said. “He is shooting a high percentage from 3 and his mid-range and post-game is supreme now.

“He hit the weights and now has a D1/NBA body at 6-foot-6 and 230 pounds. He is a playmaker with an amazing IQ. He has been first-team, all-state every year and has an MHSAA championship ring.”

Terry will play at Oregon after de-committing from Michigan State.

“Jalen Terry’s the best player in the state, fastest player end-to-end, has done a great job of quarterbacking our team and is a great leader for us,” said Beecher coach Mike Williams. “He had 19 points at halftime against Benton Harbor before injuring his ankle which forced him out of action for a couple of weeks, then was the best player on the floor against (Orchard Lake) St. Mary’s, scoring 28 in the win.”

Bowman, a 6-2 guard, is a part of the premier backcourt in the state, joining four-star junior Julian Roper and sophomore point guard Kareem Rozier, a reason St. Mary’s could end U-D Jesuit’s seven-year run of keeping the title of Catholic League champions.

Bowman, who will play next year at Wisconsin, can score in multiple ways and is an outstanding defender, a reason St. Mary’s gets things done at a high level in the transition game. He is averaging 25.2 points, 7.9 rebounds and six assists.

“Lorne is having a great season for us,” St. Mary's coach Todd Covert said. “We have three wins over Top 10 teams in the AP (Associated Press), Clarkston, Grand Blanc and Hudsonville, and I’m not sure any Mr. Basketball candidate has played a harder schedule.”

Acuff has helped No. 7 Cass Tech (15-1) to two PSL titles in the past three years, planning to get a third this week while earning the title of Mr. PSL. He wants the Mr. Basketball title as well and his play has backed it up, averaging 27.6 points, 10.3 rebounds, 6.3 assists and 4.2 steals, including a 38-point performance in last week’s overtime win over East Kentwood in the Redhawk Showcase in Grand Rapids.

Acuff, who will play next year at Duquesne, scored 44 in a 65-64 win over Detroit Henry Ford in December and had 27 points, including six 3-pointers, along with eight rebounds and eight assists Saturday in a 60-45 PSL quarterfinal win over Detroit Western. Cass Tech will host Detroit Communication and Media Arts in Tuesday night’s semifinal.

“He’s a threat to make a play for himself or others every time he gets the ball,” Cass Tech coach Steve Hall said. “His outside shooting, especially his 3-point range, has improved the most since last season.

“At his size (6-3), he’s a very good rebounder at the high school level and once he gets downhill he can assist a teammate from 75 feet away. He has pinpoint assists the length of the floor. He is also nearly unstoppable in the post and that’s a new dimension with his added strength.”

Nicholson put himself on the radar last season with his rebounding and shot-blocking ability and has now displayed the ability to hit the mid-range jumper as well as score inside or off of putbacks.

Jackson has added nearly 15 pounds since last season and is now playing at 205 pounds and is feeling more confident with his inside game while improving his perimeter game.

“I feel this season is going well, started off rough,” said Jackson, who missed the first two games of the season due to an ankle injury. “We’re starting to bond together as a team, getting good chemistry, so we want to make a deep run in the state tournament and hopefully go all the way.

“I like being back home, thrilled I’m going to play for my dream school at Kentucky next year, and now I can concentrate on the season, keep getting better. My basketball IQ has improved, and I feel like I’ve improved on my perimeter shooting and now I can pass the ball really well. I feel I can do more, like if I want to get to the bucket I can. I can create my own shot off the dribble.”

In the PSL girls' final four, No. 5 Detroit Renaissance will play Detroit Mumford (9-2) in one semifinal at King Monday at 4 while No. 17 Detroit Cass Tech will play King (11-1) Monday at 4 at Detroit Western.

Junior Precious Fields and Cass Tech dominated the second half in its game with King in late January to earn a 68-43 win.

The title games will be played at Calihan Hall Friday with the girls game at 5:30 with the boys game to follow.