Izzo said as he watched the film and started to put the numbers down on paper, even he was shocked at how one or two small plays changed the outcome. 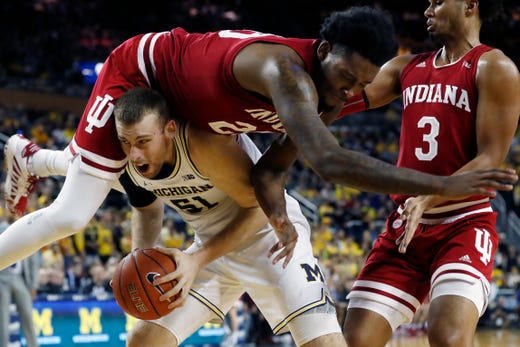 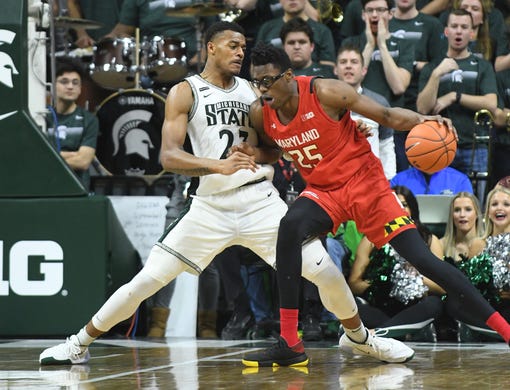 1. Maryland (21-4, 11-3) – It was a heck of a week for the team that’s starting to look like a champion. The Terrapins squeaked by Nebraska at home, but rebounded with a huge win on the road, scoring the final 14 points at Michigan State to knock the Spartans out of the race. The Terps will get a home tuneup on Tuesday against Northwestern before hitting the road to face a surging Ohio State team. Last week: 1. Daniel Mears, Detroit News
Fullscreen 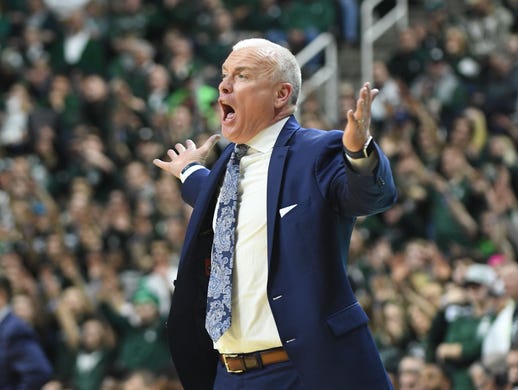 2. Penn State (20-5, 10-4) – The Nittany Lions long ago were on a three-game skid and doubt was creeping in. However, since then they’ve won eight in a row, are keeping the heat on first-place Maryland and have some talking Final Four. It would be a remarkable run for Pat Chambers (pictured) as the winning streak is put to the test this week at home against Illinois and at Indiana. Last week: 2. Daniel Mears, Detroit News
Fullscreen 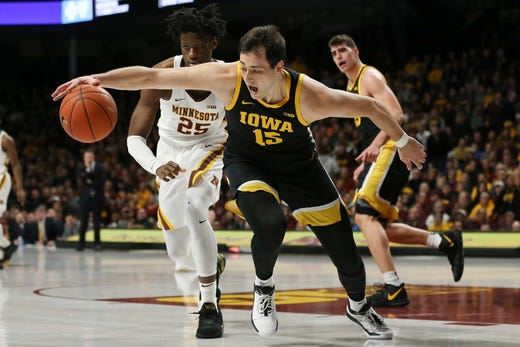 3. Iowa (18-8, 9-6) – Give credit to the Hawkeyes for bouncing back from a tough loss at Indiana by going on the road and rallying for a win at Minnesota. They might be too far back from Maryland to make a push for the Big Ten title, but it was a solid finish, nonetheless. They’ll get Ohio State at home this week before closing the season on a tough stretch that includes MSU, Penn State, Purdue and Illinois. Last week: 4. Stacy Bengs, Associated Press
Fullscreen 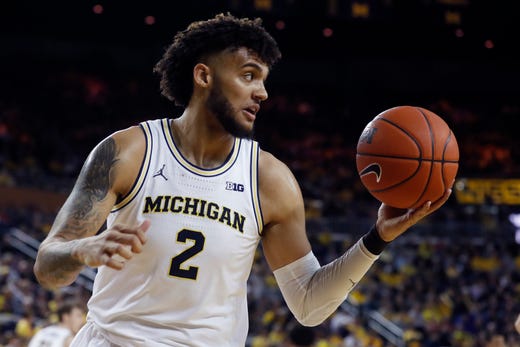 4. Michigan (16-9, 7-7) – The overall record is still lagging, but the Wolverines have won five of their last six and with the return of Isaiah Livers to the lineup, it seems they’re just hitting their stride. This will be a tough week for the Wolverines as they try and prove they’re back on the right track with back-to-back road games against Rutgers and Purdue. Last week: 8. Carlos Osorio, Associated Press
Fullscreen 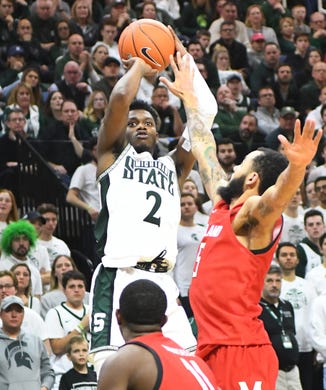 5. Michigan State (17-9, 9-6) – The slide continues for the Spartans, who have now lost four of the last five. The lone win came early in the week at Illinois, but with a chance to jump back in the Big Ten race, the Spartans allowed Maryland to score the final 14 points on Saturday and watched a seven-point lead disappear in the last three minutes. They’ll have to rebound on the road this week at Nebraska. Last week: 5. Daniel Mears, Detroit News
Fullscreen 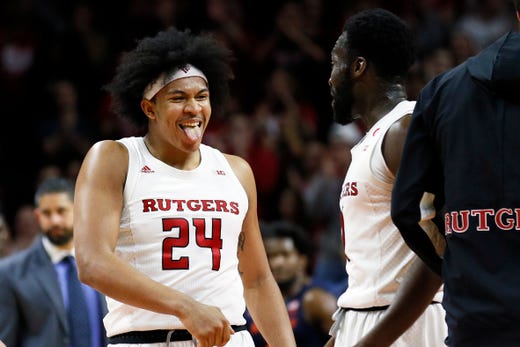 6. Rutgers (18-8, 9-6) – The Scarlet Knights keep plugging along toward the NCAA Tournament despite having lost three of their last five. A tough loss at Ohio State started the week before they took advantage of a slumping Illinois team, getting a big home win. The Scarlet Knights welcome Michigan this week before heading to Wisconsin on the weekend. Last week: 6. Adam Hunger, Associated Press
Fullscreen 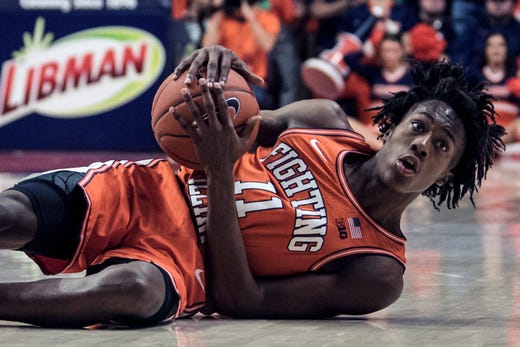 7. Illinois (16-9, 8-6) – The Fighting Illini have hit the skids, losing four in a row and playing at Rutgers over the weekend without Ayo Dosunmu (11). The star guard was hurt on the final play of a loss at home to Michigan State and missed the next game. His status for Tuesday’s game at Penn State remains up in the air as the Illini look to halt the losing streak. Last week: 3. Holly Hart, Associated Press
Fullscreen 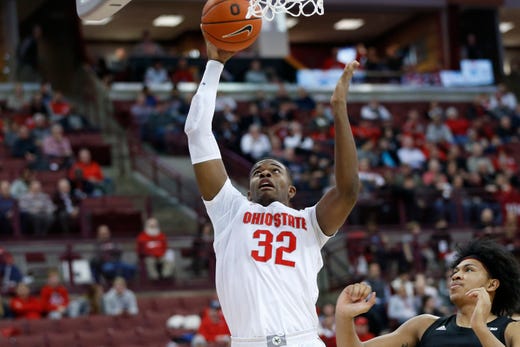 8. Ohio State (17-8, 7-7) – It feels like the momentum is starting to build again for the Buckeyes, who beat Rutgers and Purdue last week to win five of their last six. It’s been a solid turnaround for a team that was outstanding in non-conference play but struggled to begin Big Ten action. They’ll head to Iowa this week before hosting Maryland as they attempt to play off the NCAA Tournament bubble. Last week: 10. Jay LaPrete, Associated Press
Fullscreen 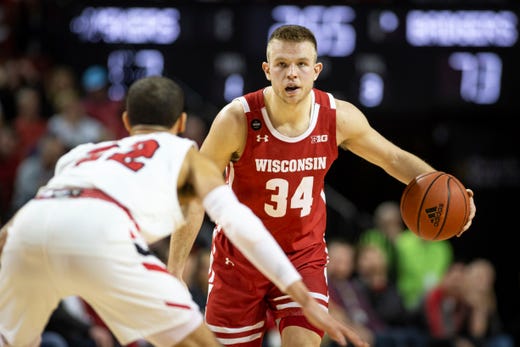 9. Wisconsin (15-10, 8-6) – The Badgers have won two in a row and three of four as they continue to solidify their NCAA Tournament resume. They’ll get a chance to do so this week as they have back-to-back home games with Purdue and Rutgers, games that will be critical to get to keep momentum heading in the right direction. Last week: 9. John Peterson, Associated Press
Fullscreen 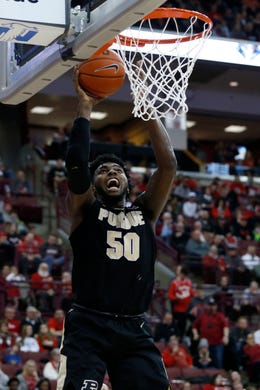 10. Purdue (14-12, 7-8) – The consistency continues to elude the Boilermakers, who entered last week having won three in a row but came up short at home against Penn State before getting blown out at Ohio State. It wasn’t a good week for the NCAA Tournament resume, but with a trip to Wisconsin up next followed by a home game with Michigan, the opportunity to turn things around is there. Last week: 7. Jay LaPrete, Associated Press
Fullscreen 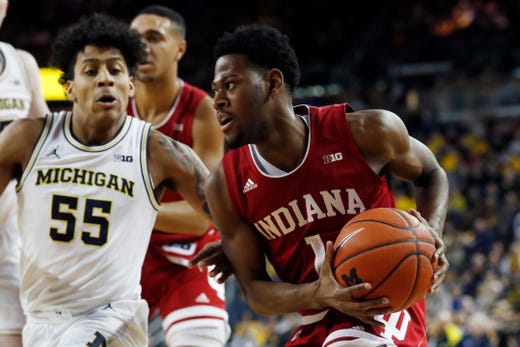 11. Indiana (16-9, 6-8) – The Hoosiers now have lost five of six games, somehow beating Iowa at home early last week to keep it from being a six-game skid. The Hoosiers were unable to build off that win, however, as they got run out of the gym at Michigan on Sunday and now must rebound at Minnesota this week before hosting Penn State. Last week: 12. Carlos Osorio, Associated Press
Fullscreen 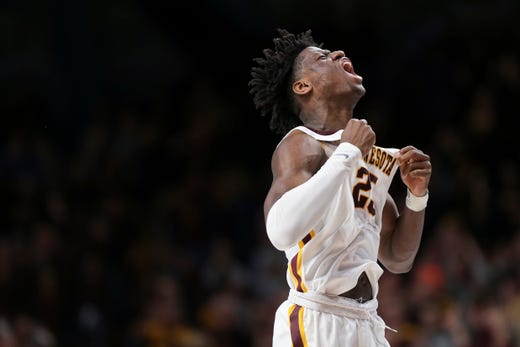 12. Minnesota (12-12, 6-8) – The Golden Gophers have to be one of the more frustrating teams in the Big Ten. They’re in almost every game they play but simply can’t finish. It happened again on Sunday as they held an eight-point lead in the final five minutes against Iowa, but never scored again to suffer their fourth loss in the last five games. Last week: 11. Stacy Bengs, Associated Press
Fullscreen 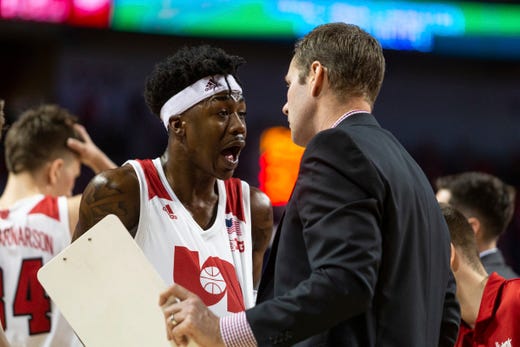 13. Nebraska (7-18, 2-12) – The losing streak is at 10 now for the Cornhuskers, but there were signs of life early in the week as they pushed Maryland to the limit on the road before losing by two. They’ll get a decent shot at ending the skid this week when they host a slumping Michigan State team on Thursday. Last week: 14. John Peterson, Associated Press
Fullscreen 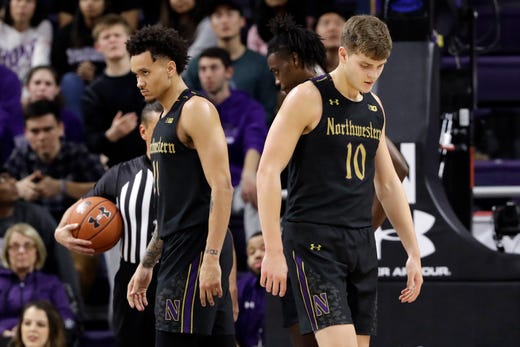 14. Northwestern (6-18, 1-13) – It wasn’t a very good week for the Wildcats, who got blown out twice and now have lost nine in a row. It’s tough to see a win coming Tuesday during a trip to Maryland, but perhaps the skid can end on Sunday at home against Minnesota. Last week: 13. Nam Y. Huh, Associated Press
Fullscreen

Perhaps it was the fact he got the news sometime after 4 a.m. that junior Xavier Tillman and his wife, Tamia, welcomed their baby boy into the world. 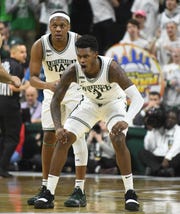 Perhaps it was simply the fact Izzo’s mind rarely stops. Having lost four of the last five games, including blowing a seven-point lead in the final three minutes Saturday against Maryland, will get the mind working overtime.

Izzo’s was for a variety of reasons, so since he was up, he started poring over game film, dissecting the numbers trying to unlock the key to what has ailed Michigan State this season.

With five games left, the Spartans (17-9, 9-6 Big Ten) are all but out of the chase for a regular-season championship, something that isn’t easy for Izzo to admit, but is certainly more of a reality as Maryland is now three games ahead in the loss column.

“There's no secret,” Izzo said Monday. “We need more than a miracle to win the Big Ten right now. But with five games left it’s still possible in this league, the way it goes.”

Izzo’s point is fair. The conference has been so competitive all season, it’s hard to rule anything out. Still, the odds remain long the Spartans can climb back into the hunt, even with games left against Maryland, second-place Penn State and Iowa, which is tied for third with Michigan State and Rutgers.

So instead of focusing too much on the race, Izzo is trying to dial in on why Michigan State is in the position it’s in. That led his overnight breakdown of his team’s performance in its nine losses.

Izzo is throwing out the Purdue and Duke losses. As he said, “We got our butts kicked.”

The other seven losses, though, the Spartans have been in a position to win. Whether it was Saturday against Maryland or the multiple road games that Michigan State couldn’t close the deal after digging out of big holes, it’s not making the little plays that could have significantly changed the trajectory of the season to this point.

Izzo said as he watched the film and started to put the numbers down on paper, even he was shocked at how one or two small plays changed the outcome. So, he called his team together before 8 a.m. to show them the same thing.

“I had a slideshow that I made this morning that of the nine games, there were five of them that were more than winnable,” Izzo said. “I think our average margin of being down was minus 1.1 in the last two minutes of all the losses. So what I'm trying to sell is not to you, because fans don't believe it, but to my players is, we're a basket away, we're a layup away. We're one stop away from being very, very, very good and winning three, four more games easy.

“It's been as confusing of a year as I've had, and I still think we're 17-9 and looking at my board today, if those three or four games that I think even we should have won — not could have, should have — where would we be right now? We'd be sitting there at 20-5 and we'd be talking about being a top-15 team.”

Changing the direction of the season is still important, though. Simply pointing out the problems isn’t a solution. It won’t make the lob from Cassius Winston to Tillman at the end of the Indiana game go in. It won’t change the fact the missed layups piled up in crunch time at Wisconsin. And it won’t change the defensive breakdowns late against Maryland.

The key for Michigan State is to make winning plays and stop “finding ways to lose games,” as Izzo pointed out again on Monday.

“Doug Herner has a great line,” Izzo said of his confidant and assistant video coordinator. “Did you lose the game or did they win the game?’ Probably of those seven, I mean those seven that I consider real losses — not the two that we got our butts kicked, we got killed. But in those other seven, I think we lost at least five of them. That’s what we can hopefully control.”

Michigan State’s quest to turn things around begins Thursday at Nebraska, the only game this week. After that, things get ramped up with Iowa coming to the Breslin Center followed by back-to-back road games with Penn State and Maryland. Ohio State comes to East Lansing to close out the regular season.

By then, the Spartans will have a good idea if they’ve figured things out. The turnovers have actually started to dwindle and the layup-missing epidemic seems to be solved.

Will it lead to making the winning plays late in games and doing the little things?

“I don't know,” Izzo said. “I still feel like we're right there. I just feel like we found ways to lose instead of find ways to win a couple of these games. We’re 17-9, and we’ve got a chance to right the ship.”