Emoni Bates lost his chance at a payback journey while trying to help Ypsilanti Lincoln repeat as Division 1 state champions, due to the COVID-19 pandemic.

The state finals for boys basketball were scheduled for this Saturday at the Breslin Center and Lincoln’s run was halted before Bates – a 6-foot-9 sophomore – and his teammates had a chance to avenge a 64-54 loss to Ann Arbor Huron in a district championship game. 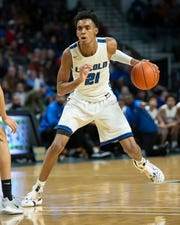 So, instead of collecting trophies for district, regional and state championships like a year ago, Bates is getting more personal accolades.

Mobley will play at USC next year and Cunningham at Oklahoma State.

Bates was joined by four new starters this season and averaged 31 points and 10 rebounds for Lincoln, which was 19-3 and ranked No. 8 by The Detroit News prior to the season being halted. He has multiple offers, including Michigan, Michigan State and Florida State, but his goal is to go directly to the NBA after high school.

ESPN analyst and former longtime NBA player Kendrick Perkins said last month on a segment of ESPN’s NBA The Jump that Bates was the nation’s No. 1 high school player regardless of class and was good enough to be a lottery pick in the 2020 NBA Draft.

As a freshman phenom, Bates joined an 11-10 team from the previous year and led Lincoln to its first league championship in 15 years, then first regional title in program history before going on to win the state title.

More: They're out! MHSAA trying to curb high school officials shortage in Michigan

Bates averaged 28.5 points and 10.2 rebounds last season to earn a spot on The Detroit News Dream Team. He was then featured on the cover of Sports Illustrated this past fall before once again taking the court and scoring more than 40 points in five games, including a 63-point, 21-rebound effort in a 108-102 double-overtime win over Chelsea, and then a 48-point performance in a win over No. 13 Grand Rapids Catholic Central.