'Mumford will never be the same': Athletics legend Dwight Jones dies of coronavirus at 73

"He was all about the kids," said Larry Moore, a colleague and a friend of Jones' for decades.

'Mumford will never be the same': Athletics legend Dwight Jones dies of coronavirus at 73

Detroit — On the bench, during games and at practice, Dwight Jones was intense as could be.

But off the court, he had a heart the size of the Mumford gym that eventually was named after him, taking cash from his own pockets to give to needy students, or tirelessly working over vendors at the NCAA Tournament's Final Four to secure any equipment, no matter big or small, for his cash-strapped school. 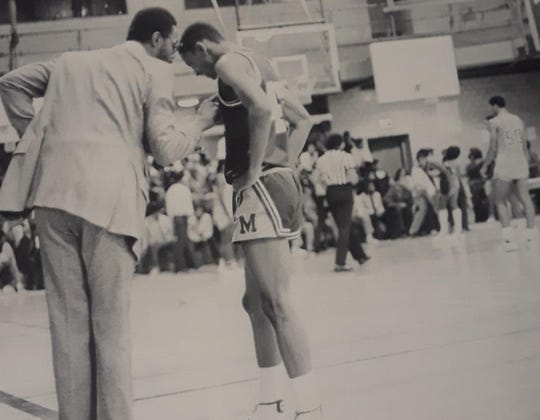 "He was all about the kids," said Larry Moore, a colleague and a friend of Jones' for decades. "He would give you the shirt off his back.

"A kid would ask him for something, and he'd bend over backward to do what he could."

Jones, a star basketball player at Holy Redeemer who eventually went on to play at Tennessee State before returning to his hometown to begin a 50-year stint in Mumford athletics, died Sunday of complications from the coronavirus. He was 73.

Jones, who had been ill in recent months, was admitted to an area hospital last week, along with his wife, Helen, who also had been showing symptoms.

The state of Michigan had reported 184 coronavirus-related deaths, 50 in Detroit, as of Monday afternoon.

"This one," said Steve Fishman, another friend of Jones', "hits us really hard."

The area first was introduced to Jones in the early and mid-1960s, when he made a name for himself on the basketball court at Holy Redeemer. At 6-foot-5, 230 pounds, he shot left-handed, and was an excellent rebounder. Jones' inside game was unmatched in the Catholic League. They called him "Hawk."

He also played football, baseball and track and field.

Jones was a rare black child enrolled at Redeemer.

"I was the only black male in the building, so I had to shine in so many ways," Jones said in an interview with the Michigan Chronicle in the spring of 2018. "The experience gave me a tremendous start. I knew I had to focus my mind on education and I knew I was going to college. Athletics is only a means to an end."

To that end, Jones also was an honor student, and before he graduated in 1965, he had earned a full athletic scholarship to Tennessee State, in Nashville, where he played two years on the basketball team, and also was a member of the Kappa Alpha Psi fraternity.

His longest-lasting performance at Tennessee State, though, was not any one game, but rather is courting of a fellow student named Helen, who would become his wife. They were married 50 years.

After college, Jones came home to Detroit. In 1970, he settled in at Mumford, where he taught physical education, coached basketball, girls and boys, and even served a long stint as the athletic director, for decades. He became the boys basketball coach in 1973.

He only retired a few years ago, but remained a presence in the basketball programs.

"Up until last year, I used to see him when he was on the bench," said Moore, who with Fishman played at Mumford and in the Public School League in the 1960s, so they never got to play against Jones and the Catholic League's Holy Redeemer, but they knew all about him. "He never left the basketball program."

Jones also coached track and field, cross country and tennis during his time at Mumford.

Every April, after his basketball season was completed, Jones would travel to whatever city was hosting the Final Four — and not just to hobnob and see some excellent hoops. The trips always were a bigger mission.

"He always asked me to go, but I never made it," said Moore, who suspected Jones went to between 30 and 40 Final Fours. "Every year, he'd come back after the Final Four and tell me who he spoke with. He was always getting vendors to send things to Mumford — basketball machines, scorer's tables, chairs for the benches, uniforms.

"He'd always call me and Steve every other year to get donations for uniforms. Detroit only allotted so much money for athletics, and of course it was never enough."

With his connections and resume, Jones could've moved on from Mumford over the years, but decided early on in his career that he didn't want to be one of those guys who always moved around, telling the Chronicle, "The Lord gave me a mission." And that mission was to continue working with youth.

Jones not only helped improve young people as athletes, he also worked overtime to get them into college, whether it was a Division I or II school, or a historically black college.

"When he took over as athletic director, he was all about grades," said Kevin Jackson, Mumford's current AD. "Words can't express what he meant to us."

Jackson was a student at Mumford in the early 2000s when he first met Jones, and they reconnected when Jackson returned to the school to work in 2012, becoming athletic director four years later.

Jackson said even in retirement, Jones spent "all this time and effort" with the girls basketball program, continuing to pay for things that needed to be paid for.

I have sadly been told through reliable sources that legendary Mumford basketball coach, Dwight Jones, has passed due to COVID-19. Our prayers and thoughts are with his family. Thank you coach for all you did for so many generations!

And in March 2018, Jackson named Mumford's gym the "Dwight Jones Gymnasium," for his, at the time, 49 years of service. (That same year, the school named its auditorium after journalist Jemele Hill.)

"He was all about the kids," said Moore, who coached under Jones in the 1980s. "That would be his legacy."

Said Detroit native and longtime college basketball coach Bacari Alexander, in a Twitter post this week: "Detroit Mumford will never be the same."

Jones is survived by Helen, daughter Kia and one granddaughter.

Services were pending as of Tuesday afternoon.